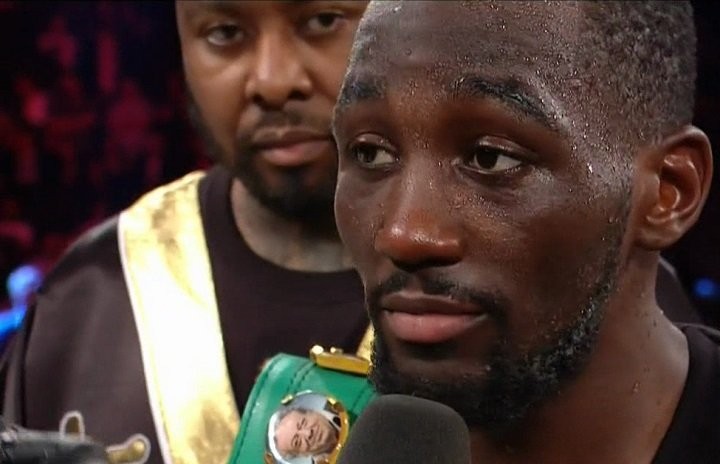 Rafael’s remarks: Sure, Crawford, 29, who was fighting only about an hour from his hometown of Omaha, Nebraska, was the favorite, but few expected him to tear through Indongo, 34, of Namibia, Africa, so easily. Instead of a long, competitive fight, Crawford made the kind of electrifying statement that people will talk about for years to come in the main event of the Top Rank ESPN card. He also added an outstanding line item to a burgeoning Hall of Fame resume, continued to make his case that he warrants serious consideration as the No.1 fighter pound-for-pound in the world and made history.

Crawford, the former lightweight world champion and the 2014 fighter of the year, who was making his sixth junior welterweight title defense, dropped Indongo with a left hand late in the second round. In the third round he put him away with a devastating left hand to the body that put Indongo down and out. He was writhing in pain as referee Jack Reiss counted him out at 1 minute, 38 seconds. With the victory Crawford became only the second fighter of the four-belt era to unify all four major sanctioning organization titles, taking Indongo’s IBF and WBA belts to add to his WBO and WBC. The only other fighter to unify the four belts was Bernard Hopkins in 2004, and then Jermain Taylor took them all in one night from Hopkins. The titles won’t be unified for long, as Crawford is headed up to welterweight, where the winner of the November rematch between titlist Jeff Horn and Manny Pacquiao likely awaits Crawford in early 2018.

Rafael’s remarks: Gvozdyk, 30, a 2012 Ukrainian Olympic bronze medalist, continued to stay busy as he moves closer to a mandatory title fight. He picked apart Baker, 33, of Baytown, Texas, with ease before knocking him out. Gvozdyk controlled the fight with his jab and was very steady throughout while Baker showed very little on offense. In the sixth round, Gvozdyk landed a hard right hand upstairs that dropped Baker to a knee. He continued, but only briefly, as Gvozdyk took it right to him. He pinned Baker along the ropes and was teeing off on him with both hands when referee Celestino Ruiz stepped in to call off the fight at 2 minutes, 4 seconds. Baker, coming off a 14-month layoff, lost for the second time in his last three fights.

Rafael’s remarks: Newark, New Jersey’s Stevenson, 20, a 2016 U.S. Olympic silver medalist, is one of boxing’s elite prospects. He continued his development with six solid rounds against Paz. It will take time for Stevenson, a southpaw, to fully mature physically, but in the meantime he has super skills and speed, which he used to rout Paz. In the fifth round, he dropped Paz, 23, of Argentina, with a left hand to put the cherry on top of his shutout victory. Stevenson is slated for his return Oct. 31 on the undercard of junior featherweight titlist Jessie Magdaleno’s mandatory defense against Cesar Juarez.

Also on the card, former junior welterweight world titleholder Mike Alvarado (38-4, 26 KOs), 37, of Denver, struggled badly with Sidney De Siqueira (26-13-1, 17 KOs), 40, of Brazil, before connecting with a massive right hand that knocked him out cold for a knockout of the year candidate at 1 minute, 20 seconds, of the fourth round of their welterweight fight.

Rafael’s remarks: In the main event of “Golden Boy Boxing on ESPN,” Machado, a 26-year-old southpaw from Puerto Rico, continued his rise with a solid victory over Morales, 27, of Mexico. Although the scores were very lopsided in favor of Machado, the fight was competitive, though Machado was winning the rounds. His biggest moment came in the second round, when he knocked Morales down with a left hand to chin in the midst of a flurry. Morales had a strong 10th round as he landed several good punches, but it was too little, too late to make any inroads on the scorecards. Morales began his career 16-0 but dropped to 0-2-3 in his last five fights.

Rafael’s remarks: Green, 28, of Brooklyn, New York, scored a surprising decision against Rivera, 27, of Puerto Rico. Rivera appeared to dominate many of the rounds, and even knocked Green down with a right hand during the second round and cut him over the left eye, but the judges saw a different fight.