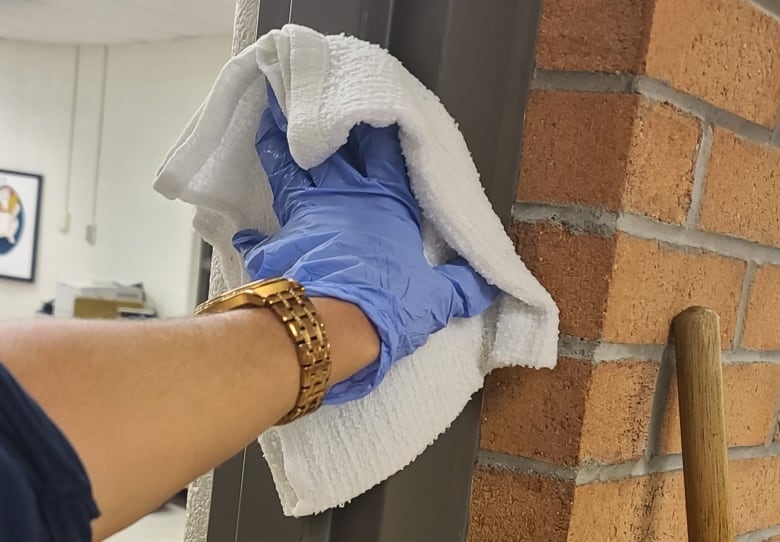 School caretakers strive to keep COVID out. But here’s what they do when there’s an outbreak, Jess Grove used to dread cleaning gum plunked under desks and glitter gone awry from class crafts.

“It was very simple, mindless things,” she said. “Now I just wish those were my worst problems.”

Custodians like Grove are now tasked with keeping COVID-19 from spreading in Ontario schools — and being first responders if the virus gets in. The job has become much more demanding, with more surfaces to clean more times a day to try and keep the virus out.

She is a floater with York Catholic District School Board, traveling school to school to keep them as clean as possible.

“We are the defense, right?” she said. “Where people are fleeing and leaving … we are the ones that go in and attack.”

“Who would have ever thought to wash off a pencil sharpener?” said Tammy Graham, a custodian with Lakehead District School Board in Thunder Bay.

“You think about everything that people touch and the things that you should be cleaning. You’re like, ‘OK, 100 kids probably touched this thing today.'”

The pandemic has helped Graham realize just how important her job will be during this unpredictable school year.

“We often are the bottom people on the rung of the hierarchy and we don’t get thought of a lot,” she said. “During these times, people really need to know how important our roles are.”

‘You worry every day’

Cases of COVID-19 have already popped up at 35 schools around Ontario. Schools and public health units assess the situation and decide whether to close a class or the entire school, depending on who was exposed.

As that’s being sorted out, school custodians are busy deep cleaning, outfitted in PPE and equipped with some new sanitation tools to make the school as safe as possible, like a special machine that sprays disinfectant.

School custodians are usually dealing with dirty halls, clogged toilets and gum under desks. But this year, they have an added challenge — keeping COVID out. Haydn Watters spoke to Ontario custodians about how they plan to do just that. 4:29

So far, school cases have been clustered around the Greater Toronto Area, southern and eastern Ontario, but it still makes Graham nervous.

“You worry every day that the virus is reaching into the building before you even start,” she said.

The province has allocated $79 million to hire up to 1,300 extra custodians and buy more cleaning supplies. Graham doesn’t think that’s enough though, as some custodians still have to move between schools.

It’s a model that has caused issues in other jobs, like long-term care home employees who initially moved between facilities, unknowingly spreading the virus.

The province banned that practice in long-term care homes in April, but school boards are allowing it for custodians this fall, though trying to limit it if they can.

‘We can only do so much’

He has extra staff and feels well prepared to tackle the year ahead.

“It’s a lot of extra work with the extra enhanced cleaning that we’re doing every day but we’re coping with it,” he said. “We’ve gotten everything we need to feel safe.”

Grove worries but feels like her school board is doing the best they can with the resources they have and wouldn’t put her in danger.

She knows she can only control so much and takes what she can control seriously. For example, she’s got a bin at her back door where she drops her work clothes when she gets home before hopping into the shower.

She hopes others are taking precautions too, like keeping kids home from school if they are showing symptoms.