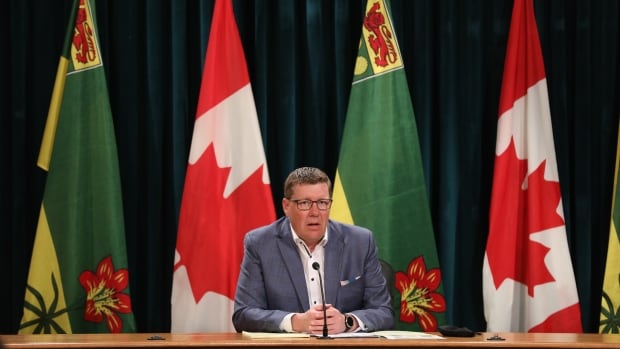 Saskatchewan Premier Scott Moe announced Friday that the province will again require COVID-19 positive people to isolate for 10 days and close contacts who are not vaccinated to self-isolate for 14 days.

Moe announced a series of responses to stresses the health care-system is experiencing.

“This fourth wave is concerning for all of us,” Moe said.

“The evidence is overwhelming. Now is the right time for you to get vaccinated.”

The premier specifically pointed out the concerns of health-care workers on the front lines.

The government decided not to reintroduce mandatory masking or a proof of vaccine policy, as has happened in other provinces.

Moe said people may be wondering why he did not impose further restrictions. He called health measures a “stop-gap” meant to bridge the province until vaccines were available and the majority of the province were vaccinated.

He said requiring vaccinations would create “two classes of citizens” and called the policy “divisive.”

Moe said he believed getting vaccinated is choice.

“In Saskatchewan, it will remain a choice, but you need to also fully understand the serious potential consequences for yourself and for our health system if you choose not to be vaccinated.”

Several provinces have implemented a proof-of-vaccination requirement to attend non-essential businesses and events.

Chief medical health officer Dr. Saqib Shahab said people who decided not to get vaccinated are failing their community, specifically in occupations where they deal with vulnerable populations or children who cannot be vaccinated.

“We are looking at a significant surge, unless we course-correct,” Shahab said.

He said measures may need to be introduced in the fall if cases continue at the current rate.

Shahab said people who are vaccinated should reach out to family members.

He said the province is in an “unthinkable situation of increased hospitalization and death,” despite readily available vaccines.

Shahab said the province does not want to get to a point where doctors are making triage decisions on who gets ICU treatment.

All public health restrictions were lifted in the province on July 11.

Self-isolation for positive cases became a recommendation, rather than a requirement, at that time.

On Friday, the province re-implemented mandatory isolation for a period of 10 days after a positive result. Close contacts who are unvaccinated will also be required to self-isolate for 14 days.

Fully vaccinated people do not need to self-isolate if they are deemed a close contact. They are asked to self-monitor.

The government said it plans to reduce non-critical or elective health services so it can respond to pressures from increased COVID-19 patient demand.

The SHA said the reduction will be temporary and localized.

To make up for the slowdown, the provincial government purchased 8,500 MRI and CT scans from private providers. It also plans to provide 2,300 scans at smaller hospitals.

The government announced it will rely on third-party providers to help with both contact tracing and testing.

Moe said the province has purchased a million rapid antigen tests from the federal government, with half of the order expected to arrive in the province next week.

The government said it is in the process of working with unions to implement mandatory vaccination or proof of a negative test for all SHA employees.

The government recently said it would require a portion of SHA employees to be vaccinated.

The province is also in the process of reaching an agreement with unions to allow for greater flexibility in the workforce to respond to COVID pressures.

Moe said if no agreement can be reached, the government will sign an emergency order on Monday, Sept. 13.

Saskatchewan Opposition Leader Ryan Meili said Friday that the government is ignoring the advice of the medical community by failing to implement more measures.

“The premier of this province is choosing to allow Saskatchewan people to die when he has other options. This is embarrassing, it’s infuriating and it’s deeply sad,” Meili said.

Meili said the lack of COVID-19 health measures is due to the provincial government is pandering to anti-vaccination and anti-mask ideologies.

“The deaths in the coming weeks are on Scott Moe’s hands because of the decisions that he has chosen to make. We’re doing the worst in the country, and he’s chosen to do the least,” Meili said.

Health-care workers pushed to the limit

Dr. Alex Wong, an infectious diseases physician in Regina, said many health-care workers have moved away or transitioned out of our emergency departments or ICUs because of the workload and stress.

“It has been so incredibly tiring and taxing for all health-care workers to deal with all of this,” Wong said.

“The course [of the provincial government] based on today’s press conference was made pretty clear. I think we’re pretty much on our own here, and I’m not entirely sure what that means for our health-care system.

“There’s been a little bit of movement with respect to some [new measures], but not enough to be in a situation where there won’t be again, some form of medical or ICU triage, sadly, in the near future.”

COVID-19 cases have risen sharply in the province over the last several weeks, most notably in Saskatoon where there are 993 known active cases, roughly 30 per cent of all known cases in the province.

The spike led SHA CEO Scott Livingstone to send correspondence to SHA staff, which was obtained by CBC, on Thursday.

“The unchecked spread of COVID among this population is escalating pressure on our hospitals and will result in Saskatchewan residents going without certain health services that they rely on to maintain their quality of life,” Livingstone said.

“Not only are they choosing to risk their own lives by going without the protection vaccines provide, they are risking the lives of those they love and those in their communities.”

Saskatchewan surpassed Alberta this week to lead all provinces in case rate per 100,000 people. The two provinces sit at the bottom of the list when it comes to vaccination rates in Canada.

Front-line doctors, the Saskatchewan Medical Association and the Saskatchewan Union of Nurses are among those who have called for increased measures to combat rising cases and hospitalizations, and vaccination policies to increase the province’s stagnant rates.

City leaders in Regina and Saskatoon have implemented policies like indoor masking in recent days. The mayors of Saskatoon and Prince Albert have also called on the government to implement a uniform provincial policy.

In recent weeks, B.C., Manitoba, Quebec, Ontario and Nova Scotia have introduced proof of vaccination requirements for individuals to take part in activities, events, and to attend indoor businesses.

Last Friday, in response to growing cases and hospitalizations, Alberta reintroduced indoor masking provincewide. It also offered $100 gift cards to anyone seeking a first or second dose of vaccine.

On Wednesday, protestors gathered outside Health Minister Paul Merriman’s office in Saskatoon to call for public health measures. A similar protest was held at the legislative building in Regina on Thursday.

We’ve heard doctors and others calling for more action from the province when it comes to this pandemic. So where is the premier? Leader post columnist Murray Mandryk and CBC provincial affairs reporter Adam Hunter join host Stefani Langenegger in this week’s political panel. 6:46