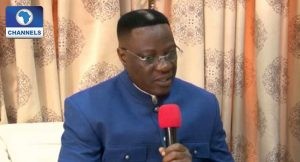 The Kwara State Governor, Abdulfatah Ahmed has lauded the victory of Senate President Bukola Saraki at the Code of Conduct Tribunal (CCT).

Earlier, the CCT ruled that the Senate President had no case to answer in the 18 charges of non-declaration of assets levelled against him by the Federal Government.

The Tribunal also held that the formulation of the charges was predicated on the testimony of the third prosecution witness and Chief Investigation Officer at the CCB, Mr Samuel Madujemu.

Reacting to the ruling on Wednesday, Governor Ahmed described the victory as a vindication of the incorruptibility of Dr. Saraki, saying it reflected the confidence of the people in the judiciary.

He said this in an interview with reporters after addressing members of the All Progressive Congress who came to rejoice with him at Government House in Ilorin, the Kwara State capital.

The governor said the people of the state were happy with the judgement and would continue to have confidence in the judiciary.