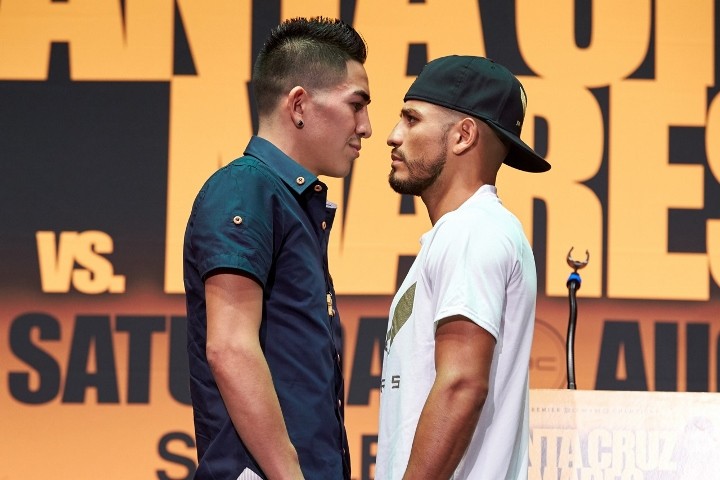 LAS VEGAS — Featherweight world titleholder Leo Santa Cruz and secondary titlist Abner Mares, whose rematch had been penciled in for Oct. 7 on Showtime but was scrapped last week, will instead appear in a doubleheader against alternate opponents on Oct. 14.

The doubleheader will take place on a Premier Boxing Champions card on Fox at a venue to be determined in Southern California.

The rematch was mandated, and since Al Haymon manages both fighters, a deal was quickly made and a scheduled purse bid was canceled. However, there were a variety of issues, including how the fighters would split the money, that caused the delay. Also, the Santa Cruz side preferred to have one more fight first before facing Mares again in early 2018.

“Yeah, I am a little disappointed because for a second there I thought everything was 100 percent confirmed and I was excited to face him again, but it happens,” Mares said on Friday in the Floyd Mayweather-Conor McGregor media center.

“Whatever comes my way, I’m ready. I was ready for Leo Oct. 7, so regardless, whoever they put in front of me, it’s a fight away from the Leo fight.”

Mares said Haymon assured him he would get the rematch with Santa Cruz in the fight after the October doubleheader, assuming they both win.

Mares, 31, who, like Santa Cruz, 29, has won world titles in three weight classes, said no opponents were set yet, but Mares said he would be defending his 126-pound belt.

Mares hasn’t fought since claiming his secondary belt by split decision from Jesus Cuellar in December 2016. In his most recent fight, Santa Cruz claimed a majority decision and regained his featherweight title against Carl Frampton in their thrilling rematch on Jan. 28.