Sandra Bullock’s Romantic History: The Rumors and the Reality, Including the Relationships You Totally Forgot About 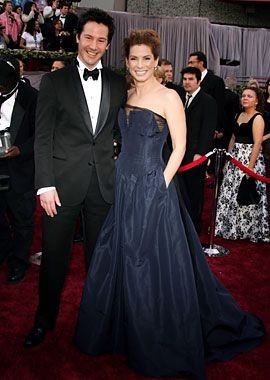 The Damages star was one of the great loves of Bullock’s early-Hollywood life after they met in 1990 on the set of Love Potion No. 9, which didn’t get to theaters until 1992. They broke up in 1994 and, not long after, Donovan started dating Jennifer Aniston.

“I adored Tate so much,” Bullock told Vanity Fair in 1995, her voice reportedly trembling with emotion. “It’s like they say, there’s one person in your life, and Tate and I are closer than any two people I’ve ever experienced in my life. There’s nobody that means more to me, and I know for a fact that I mean the most to him, in that certain way. I can’t explain why things worked out the way they did. We both know why it happened.”

“Everybody has one that is apart from all the rest…He brought out everything in me that was good, that was bad, that was suppressed,” she told Barbara Walters in 1996, explaining how she had always held people at arm’s length prior to dating Donovan. Asked if she was over the relationship, Bullock said, “I don’t think you ever get over something that is honest…It takes a lot for me to fall [in love]. A lot. And knowing him was the greatest gift to myself and to my personality—and to my work, in sort of opening the door.”

The actress shot down Walters’ suggestion that perhaps it was her fame surpassing Donovan’s that helped bring about the end. “Never in a million years do I think that success is what pushed a love away,” Bullock countered. “That’s not it at all. And it doesn’t go away. It stays in its very special place. It’s always something that’ll be taken care of and I respect it, and I protect that more than anything, and I won’t let anybody cheapen it. Because two good, honest people, just because it doesn’t work doesn’t mean they can’t stay friends…it doesn’t make anybody the bad guy. We both made mistakes and you’ve got to go on.”

Asked if she wanted to be married, the then 30ish-old Bullock (she used to play coy about such things way back in the day), told Walters, “I’d love to be in a place where I go, ‘I’m ready to be married.'” But she wasn’t ready then. (And she also said she’d never yet been engaged, though some reports have called Donovan her ex-fiancé.)

Donovan told E! News in 2010, after seeing both Bullock and Aniston at the Golden Globes that year, “I mean, it’s been 150 years, so if you can’t bury hatchet in that amount of time something’s wrong with you.”