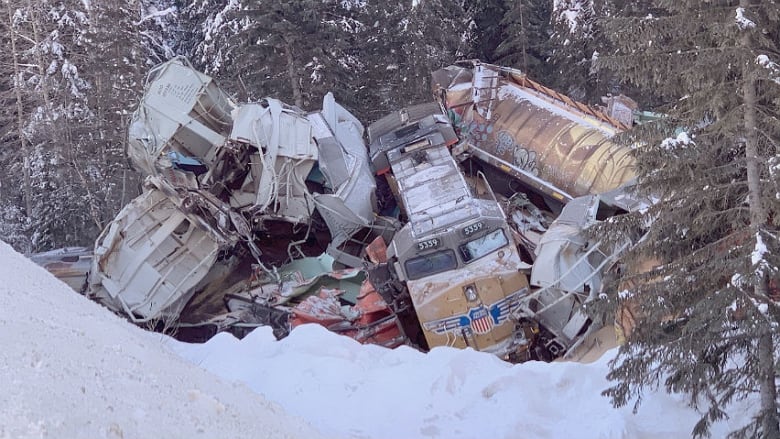 The families of two Calgary railroaders killed in a runaway train crash near Field, B.C., in 2019 are accusing Canada’s top safety watchdog of conspiring with Canadian Pacific Railway to block a criminal investigation into the deadly derailment.

A lawsuit, filed in Vancouver last week, alleges the Transportation Safety Board (TSB) caved to threats by CP Rail and muzzled its lead investigator in an “elaborate and aggressive” strategy to keep the RCMP from probing the company’s role in the crash.

“As a mother, it makes me feel, well, furious, honestly,” said Pam Fraser, whose son, Dylan Paradis, was killed in the crash.

The victims’ families accuse TSB officials of “misfeasance in public office” for failing to call police to report evidence of a potential crime — claiming it has left them further traumatized and grieving, questioning the safety agency’s role and independence.

Engineer Andrew Dockrell, 56, Paradis, 33, the conductor, and trainee Daniel Waldenberger-Bulmer, 26, were killed when their train’s air brakes failed in windchill temperatures of –30 C on Feb. 4, 2019. It caused their loaded CP grain train to run away down a mountain, derailing 99 cars and landing the locomotive in the Kicking Horse River.

The lawsuit, which also names CP Rail and former federal transport minister Marc Garneau, was filed on Nov. 10 by the Dockrell and Paradis families.

Earlier this year, the families also filed a lawsuit against CP alleging the company has a history of cutting corners to save money at the expense of workers’ safety, as well as a pattern of abusing its own corporate police service to shield the company from criminal negligence investigations.

Now, they are taking aim at the TSB, which — according to internal emails obtained by CBC News through an access to information request — pulled its lead investigator from the case amid threats by CP, after the investigator went public calling for outside police to look into potential criminal negligence by the company.

The allegations have not been proven in court, and no statements of defence have been filed in court.

The TSB said in a written statement that it is currently drafting its final report into the derailment and will not comment on the lawsuit while it’s before the courts.

In its statement, CP characterized the suit as “misleading” and said the railway “continues to co-operate fully with all investigations and inquiries.”

In February 2019, the only policing agency to investigate the crash was the CP Police Service (CPPS), which is paid for and owned by the railway. While the RCMP was on the scene assisting, CPPS was in charge of the criminal investigation.

But the CPPS probe was shut down one month after the crash, and according to CPPS Chief Al Sauve, it only examined the actions of the three dead crew members.

Former CPPS officer Mark Tataryn, who worked under Sauve and investigated the derailment, told CBC News his superiors blocked him from looking into the maintenance history of the train, orders by managers ahead of the crash and whether safety policies had been followed on the night of the derailment.

Tataryn said he believed a “coverup” had been orchestrated by CP.

Don Crawford, the lead investigator for the TSB — which has no power to lay charges or make any findings of blame — also went public with his concerns after his own employer refused to address them.

In late 2019, Crawford had gone to his bosses and recommended the case be referred to the RCMP to investigate. But a month later, when TSB’s senior leaders refused his request, Crawford went public, telling CBC News there was “enough to suspect there’s negligence here” and that police should step in.

The night the story was published, internal documents showed an immediate flurry of back-and-forth emails between CP and the TSB reacting to comments made by Crawford. The emails reveal CP threatened a lawsuit against the TSB and demanded Crawford’s removal.

The families’ lawsuit claims that the TSB then took actions to “muzzle and sanction” Crawford, removing him from the file.

Although it said it acted independently of the threats, the TSB removed Crawford from the case, issued a statement distancing itself from its own investigator and privately apologizing to the railway.

It wasn’t until December 2020 — nearly two years after the fatal derailment — that the RCMP’s major crimes division opened a criminal investigation after Pam Fraser, Paradis’s mother, filed a formal complaint.

The lawsuit also characterizes Crawford as a whistleblower who went public only after his bosses refused to go to police.

The case raises questions about what, if any, protections are offered to TSB employees who speak out about suspected criminality in fatal crashes.

The TSB’s final report into the fatal derailment could be made public any day.