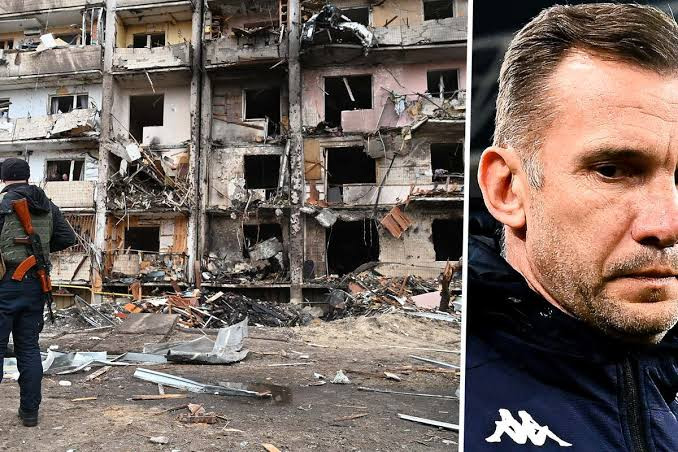 Russia Former Chelsea footballer and Ukraine football legend Andriy Shevchenko has
suggested that Russia be banned from the game of football till its war with Ukraine ends.

Since Russia invaded Ukraine on February 24, millions of people have fled Ukraine into neighboring countries.

Also all sport activities has been suspended in Ukraine, because all mass gatherings are currently banned under martial law.

Also read: RCMP officer speaks of ‘regrets’ that have haunted him since mass shooting

Shevchenko who made his name as a player during his time at AC Milan and later Chelsea has become the first ambassador of a charity created by Ukraine’s president, Volodymyr Zelensky to support the country at war.

Speaking to the BBC, the former striker pleaded for donations.

“This war is cruel. It’s atrocious. It’s a genocide.” he said.

“It was important for me to find a way to help my country. Ukraine is paralyzed, it’s impossible to run the economy, we are being shelled every day and people are dying.”

He says all money raised by the charity United 24 will go straight into the national bank of Ukraine, and then will be distributed to help with the war effort.

Als read: Roommate or tenant? The question is at the heart of Ontario rental dispute that led to viral video

Russian football clubs have been suspended from all competitions by Fifa and Uefa.

Despite the ban on sporting activities, on June 1, Ukraine will return to competitive action in their delayed World Cup playoff against Scotland.

“Many of them didn’t have the opportunity to train at all. But I believe a miracle is possible, because I know what kind of motivation they have.”

When asked about his relationship with former Chelsea owner Roman Abramovich, Shevchenko said he hasn’t spoken to him since the start of the war.

“As long as there is a war in Ukraine, no Russian athlete should be allowed to participate in any competition” Shevchenko said.

“Because of Russia, our athletes are deprived from doing any sports. And they could be killed at any moment.”