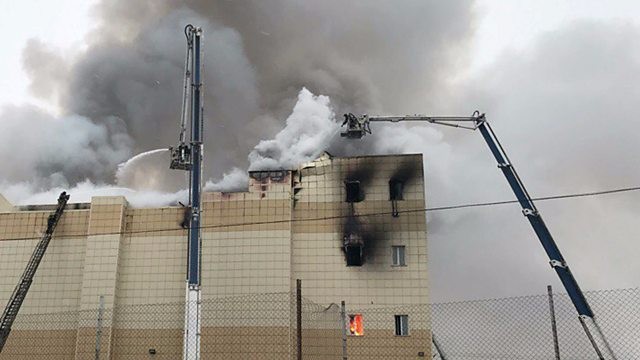 At least 37 people are confirmed to have died in a fire that tore through a shopping centre in the Siberian coal-mining city of Kemerovo.

At least 64 people are missing, including 41 children, and parts of the building are in danger of collapse.

The blaze started on an upper floor of the Winter Cherry complex while many of the victims were in cinema halls.

Video posted on social media showed people jumping from windows to escape the flames on Sunday.

As many as 660 emergency personnel have been deployed in the rescue effort.

The cause of the blaze is not yet known but authorities have launched an investigation.

Austrian Chancellor Sebastian Kurz has offered his condolences to the families and friends of the victims, as did Latvian Foreign Minister Edgars Rinkēvičs.

Where did the fire start?

As well as cinema screens, the complex, opened in 2013, includes restaurants, a sauna, a bowling alley and a petting zoo.

The fire is believed to have started at around 17:00 (10:00 GMT) in a part of the building that contains the entertainment complex, local media report.

“According to preliminary information, the roof collapsed in two cinemas,” Russia’s Investigative Committee said in a statement.

Yevgeny Dedyukhin, deputy head of the Kemerovo region emergency department, said the area of the fire was about 1,500 sq m.

“The shopping centre is a very complex construction,” he said. “There are a lot of combustible materials.”

What do we know of the victims?

The 37 bodies found are difficult to identify, said Mr Dedyukhin, but nine of them are of children.

Emergency services had been unable to reach one of the cinema halls on the third floor because of smoke and the danger of the building collapsing, an unnamed source told Russian news agency Interfax.

Another source told the agency there was practically no chance of finding survivors.