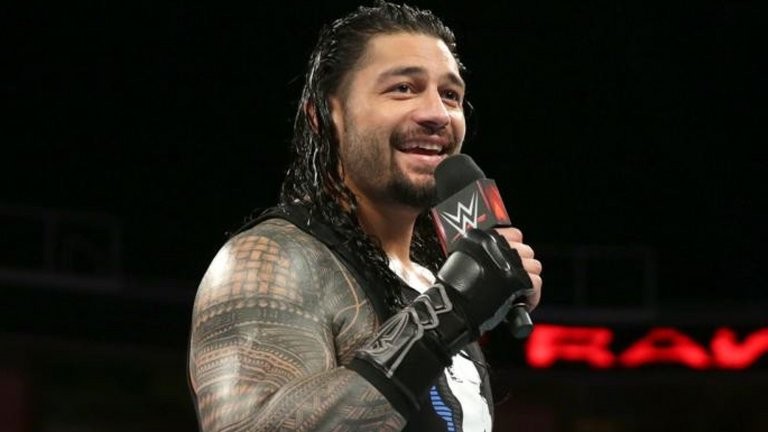 Roman Reigns this week returns to the final episode of Monday Night Raw before the red and blue brands do battle at Survivor Series.

The Big Dog has been absent from action for nearly a full month with his most recent outing being the Kane-influenced steel cage loss to Braun Strowman in October.

But he will be back in action on the ‘go home’ Raw for the Survivor Series pay-per-view, which can be seen live on Sky Sports Box Office in the early hours of Monday morning.

Reigns’ return could not have come at a better time for his comrades in The Shield. Last week they dropped the Raw tag titles to Sheamus & Cesaro after The New Day interrupted the final match on the show in the second part of the SmackDown siege.

As Kurt Angle was rallying his troops to see off the blue invaders, Sheamus hit Seth Rollins with Brogue Kick and then got the three-count to secure the straps.

The Shield will surely not allow such an infraction to stand and they will have The New Day firmly in their sights with Survivor Series on the horizon.

The possibility of the two three-man teams going into battle there is a mouthwatering one and many fans will see the coming together of two of the best factions in the company’s recent history as something of a dream match.

The Survivor Series card is already looking pretty stacked but it seems highly unlikely that two of the most popular groups in WWE – and, in the case of Reigns, one of their main event players – without a match on one of the biggest pay-per-views of the year.

The New Day showed they have a brutal edge when Xavier Woods and Big E battled The Usos in a savage Hell In A Cell brawl on October 8, and given The Shield’s fondness for a triple powerbomb through a table, this one could get brutal.

Paul Heyman has spent the past few weeks preparing his client – Brock Lesnar – for a champion-against-champion showdown with Jinder Mahal at Survivor Series.

But those plans were torn to pieces when AJ Styles took the belt from Mahal in thrilling fashion on last week’s SmackDown.

It will be interesting to see how Lesnar’s advocate responds to the change of opponent from the more power-based Modern-Day Maharajah, to Styles, who used his quickness to claim the WWE title in Manchester.

Heyman is always entertaining, and what he has to say should add another layer of excitement to an already intriguing contest.

Who will Alicia Fox’s final pick be?

The Raw women’s team for Survivor Series is all but filled out, with just one spot up for grabs.

Foxy added both Asuka and Sasha Banks to her squad last week, but surprisingly left Bayley out in the cold.

The ever-popular Hugger will now have to face off against Mickie James and Dana Brooke for the final place in the team.

But could there be a late surprise, with rumours growing that a certain British former women’s champion is training at the Performance Centre ahead of a potential return?…