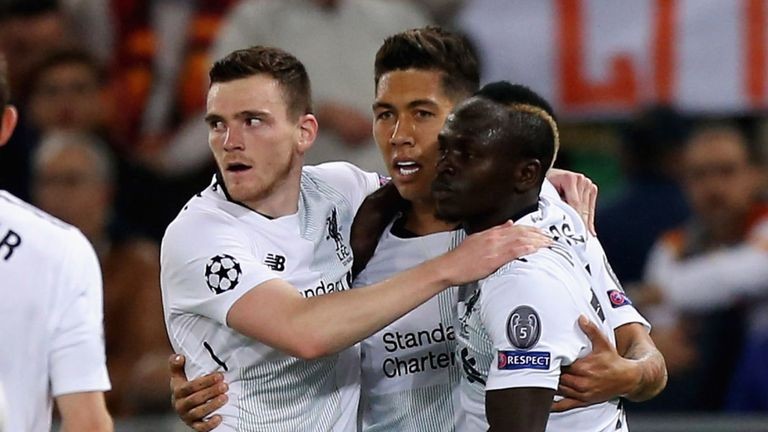 Liverpool booked a date with Real Madrid in the Champions League final on May 26, despite losing 4-2 in Roma, going through 7-6 on aggregate.

Holding a 5-2 first-leg advantage from Anfield, Liverpool eased any early nerves when Sadio Mane struck (9) but an unfortunate James Milner own goal (15) levelled the scores on the night.

Any hopes of a Roma comeback were dented by Georginio Wijnaldum (25) and although Edin Dzeko (52) and a double from Radja Nainggolan (86), (90+3) made the scoreline close, the visitors saw out a freakishly high-scoring tie to make their first Champions League final since 2007.

This win took free-scoring Liverpool’s goal tally to 130 this season in all competitions, which is their second-highest scoring season behind the 138 goals scored in the double-winning 1985/86 campaign.

Man of the match: Radja Nainggolan

The build-up to the second leg was overshadowed by concerns about the safety of Liverpool’s travelling fans, after 53-year-old Sean Cox was attacked before the first leg at Anfield, but there was no pre-match trouble reported in Rome.

No team had ever overturned a 5-2 first-leg defeat away from home in the Champions League and that three-goal deficit was soon four inside nine minutes as Liverpool made the perfect start.

There were no surprises in the Liverpool team as they made just one enforced change from the first leg with Georginio Wijnaldum replacing the injured Alex Oxlade-Chamberlain. Roma made three changes as Lorenzo Pellegrini, Patrik Schick and Stephen El Shaarawy were handed starts.

Nainggolan gave the ball away on halfway, which allowed Liverpool to break clear through Roberto Firmino. He drove forward before finding Mane, who fired into the far corner.

Roma needed to respond quickly, which they did on 15 minutes. A deep cross was lazily hacked clear by Dejan Lovren and the ball ricocheted off Milner’s head before flying into the net.

The Stadio Olimpico sensed a comeback was back on, but, Liverpool dented those hopes on 25 minutes when Roma failed to clear a corner and Wijnaldum, who was played onside, turned and nodded a crucial goal home. The Italians now needed four to force extra-time.

Stephan El Shaarawy hit a deflected effort that beat Loris Karius but came back off the post while Firmino – a constant threat – had a goal-bound effort blocked away.

Considering the visitors had a comfortable cushion, they still looked nervy at times and Roma made them pay after the break. Trent Alexander-Arnold got beat down the line by El Shaarawy and his effort could only be spilled by Karius, which left Dzeko with a tap-in.

hat chaotic period was a key storm for Liverpool to ride as Roma began to tire as the clock ticked down. However, there was still time for Nainggolan to rifle home a 25-yard effort home with four minutes left.

A grandstand finish was set but Roma could not force any more pressure until the last kick when Nainggolan smashed home a penalty after Ragnar Klavan handled inside the area.

The visiting players and supporters celebrated jubilantly at the final whistle with the prospect of a sixth European Cup firmly in their sights.

There is a fantastic game now coming up against Madrid and they are 90 minutes away from making history. Liverpool are great offensively, but Roma showed tonight you can get after them and make chances, that’s why they aren’t up there competing with City. Madrid are an extreme of that as well; they can play scintillating stuff but you can make chances against them. The final could be any score.

It’s a huge achievement. There have been better teams than this Liverpool team down the years that haven’t got to those types of final. Credit to them, though the Champions League format has suited the way they play. They score goals and are explosive when on the offence, but defensively we know they have problems.