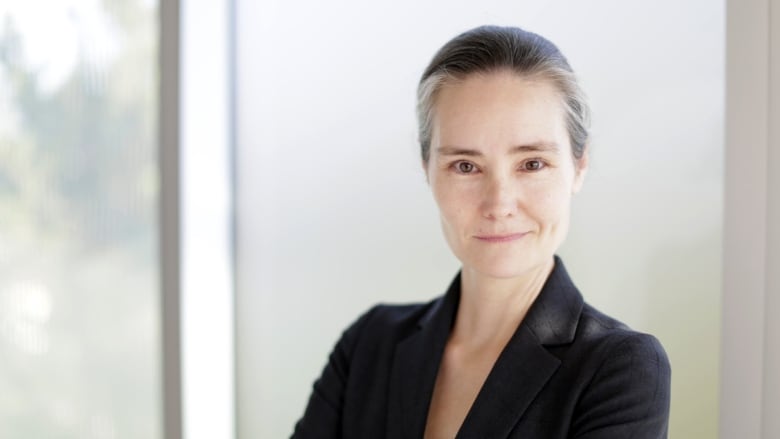 The family of a 91-year-old woman is outraged Rogers had demanded she pay hundreds of dollars for failing to return phone and internet equipment while her long-term care home was under lockdown.

The family cancelled those services for Joan Davis in early May after noticing her dementia was worsening and she was struggling to use them.

They kept basic cable to help her pass the time. Her daughter, Lori Davis, says Rogers told the family a technician would pick up the equipment, but never showed.

What did show up was a bill for the unreturned equipment — more than $450 which, by this month, had grown to almost $565.

“Rogers had no room for consideration or compassion,” Lori, who lives in Kingston, Ont., told Go Public. “It’s not about people, it’s only about profits.”

Lori says no matter how many times she tried to explain the situation to Rogers, she was given the same answer: return the equipment or pay the penalty; even though the Ottawa long-term care facility was locked down — with 30 COVID-19 cases including Joan.

“I went for six months before I could touch my mom with a rubber glove on my hand, not knowing if she was going to actually make it or be like the other residents that had passed away,” she said.

After hearing from Go Public, Rogers took steps to address the situation, including waiving the charge.

But Lori is just one of about a dozen telco customers who contacted Go Public with complaints about Rogers and Bell charging penalties for situations brought on by COVID-19 that are out of customers’ control — most dealing with financial hardship brought on by the pandemic.

Though their financial reports don’t specify how their internet, cable and phone divisions did, Rogers Communications and Bell Canada Enterprises both made more than a billion dollars in the first nine months of the pandemic. Rogers netted $1.24 billion and Bell $1.9 billion between March and December 2020, according to their reports.

Business ethics expert Christie Stephenson says, at times like this, businesses that can afford to, like telcos, should set aside profits and concentrate on helping customers who are struggling.

“It’s pretty hard to overstate the exceptionality of COVID on everyone [so] businesses have an opportunity to say, ‘What can we reasonably do for customers — and particularly vulnerable customers?'” said Stephenson, executive director of the Peter P. Dhillon Centre for Business Ethics at UBC’s Sauder School of Business.

‘She was in a room, isolated’

For two months, Lori had no idea the charges were coming, even though she handles the billing. Rogers gives customers 60 days to return equipment before applying charges.

By July, the bill included more than $450 for the equipment.

“I was rather startled that there was this charge for equipment that we weren’t using, couldn’t return, and originally told we weren’t to touch,” Lori said.

The company’s terms of service state consumers are responsible for access to any equipment and for returning any rented equipment upon cancellation of a service agreement.

Adding insult to injury, Lori says, while she was trying to deal with those charges, Rogers cut off her mother’s basic cable for failing to pay the equipment fees — leaving the senior with no ties to the outside world. 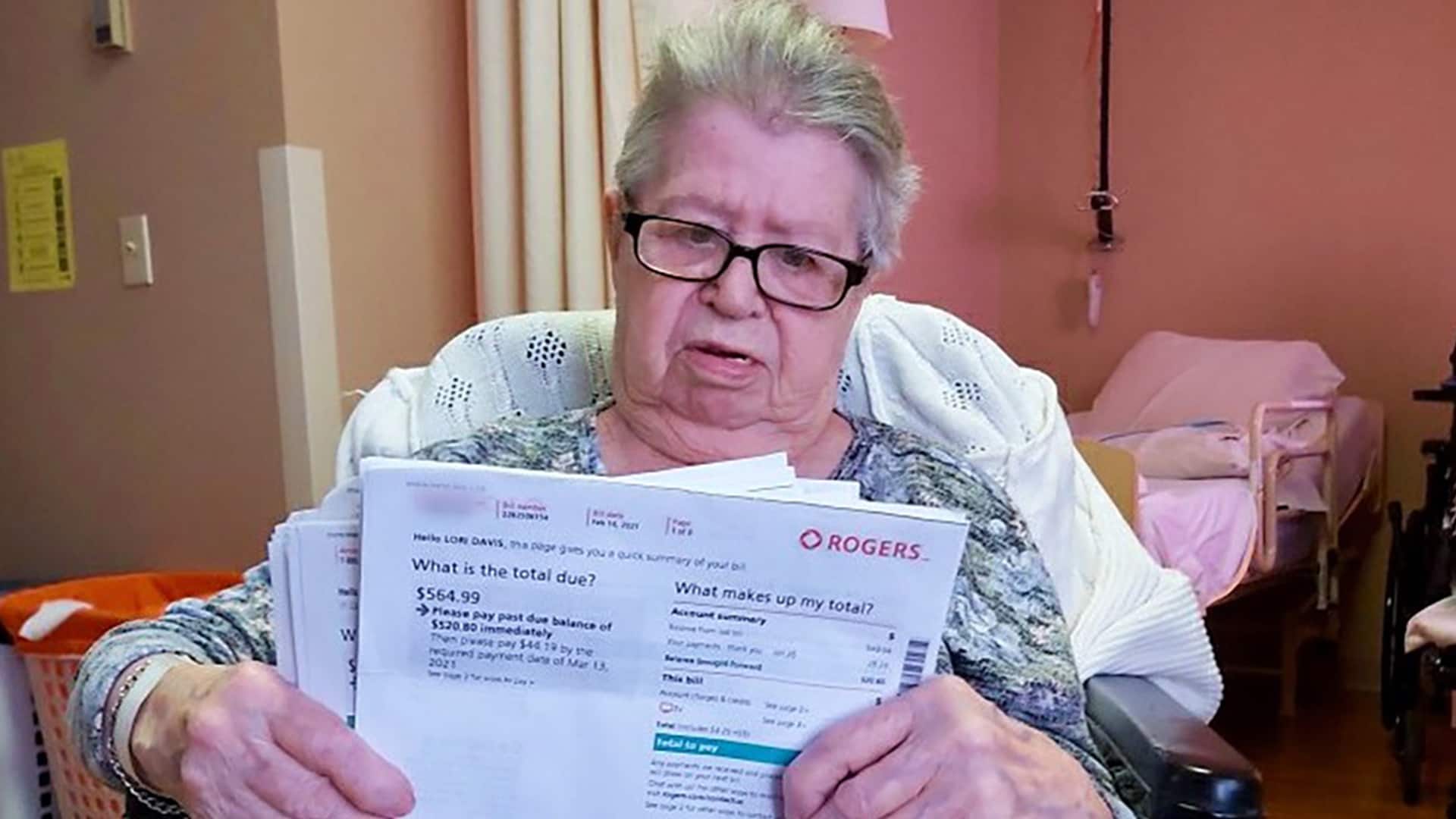 The family of a 91-year-old woman says Rogers slapped the senior with over $500 in fines for not returning equipment while her long-term care home was under a COVID-19 lockdown. 2:13

The cable part of the bill was paid up.

“She was in a room isolated by herself … We were not allowed to visit. So she was very depressed because she was ill and lonely,” Lori said.

According to the Television Service Provider Code — a mandatory code of conduct for all licensed television service providers — companies need to give customers 10 days’ written notice when cable service will be disconnected, explain why, and outline the cost to reconnect the service, among other things. Lori says the family didn’t get any notice.

She blames Rogers policies for what happened to her mom.

“I’m not looking for an apology. I want to see the policy change … some guidelines. There should be some protocol when going after people for billing.”

Visitors to her mom’s long-term care facility were finally allowed back inside residents’ rooms on Feb. 14.

After Go Public contacted Rogers, it apologized to the family, reversed the charges, reconnected the cable and gave Joan three months of free cable service.

“As we looked into Ms. Davis’s experience, we found that as a result of the pandemic, our process for returning equipment doesn’t reflect the challenging circumstances many of our customers continue to face in these times, including lockdowns in long-term care facilities like hers,” Eric Agius, chief customer officer at Rogers wrote in an email to Go Public.

“We’ve started an immediate review to look at what went wrong and take every necessary step to prevent this from happening in the future.”

‘Screwing over the little guy’

Ben Wilkinson also wants to see policy changes after his experience with Bell.

He and his brother are in the process of closing their live music business, Junction City Music Hall in Toronto. The business hasn’t been open for shows since last March due to COVID-19.

The brothers contacted Bell in November, looking to cancel their landline and were told, because of an automatically renewing contract, they are on the hook for a $580 termination fee.

“I asked if we could avoid the fee,” Wilkinson told Go Public about his followup call to the company in mid-February.

“They said, as a matter of course, currently they are not doing anything for any customers of theirs that had to close or change your business plans to the pandemic. I feel like they’re screwing over the little guy. Taking money where they can.”

In an email to Go Public, Bell spokesperson Nathan Gibson wrote that the company has “stepped up” for its customers during the pandemic, including “waiving internet overage charges, providing free TV and other services, and working with impacted customers including small businesses to manage their accounts.”

Go Public asked how many customers had charges waived since March 2020 and the total amount that was waived, but Bell says those numbers are not available.

Gibson says the company will be following up with Wilkinson, “to see whether there are any other ways we can further assist him.”

There have been 15,713 billing complaints filed against telecom companies since the beginning of the pandemic (March 2020 to February 2021), compared to 20,111 in the previous 12 months, according to the Commission for Complaints for Telecom-Television Services (CCTS), an independent, industry-funded organization created to resolve telco complaints.

The CCTS tells Go Public it handles “every complaint individually” and considers outlying factors like COVID-19, as set out in its Procedural Code, when making decisions.

Stephenson, the ethics expert, says it shouldn’t have to come to that.

“I think everyone’s looking at businesses and asking how responsible they are in a crisis. This is a perfect opportunity … for companies to really show what they stand for,” she said.

Lori says she’ll follow up with Rogers to see what comes of its policy review, and if any changes are made.

“[Right now] you’re not dealing with people, you’re dealing with a policy. And the policy says you haven’t paid your bill,” she says. “That needs to change.”