Rios: ‘I’m ready to get back to the top’ 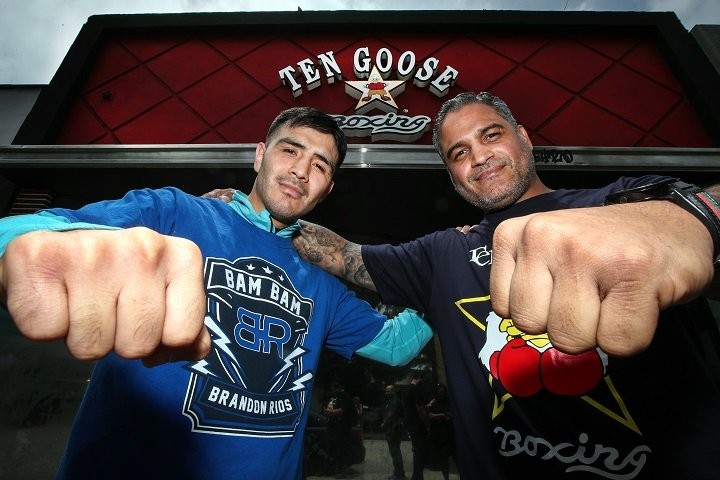 Brandon “Bam Bam” Rios didn’t want to be one of those fighters who retired time and again only to be lured back into the ring.

When he retired 19 months ago in the immediate aftermath of his ninth-round knockout loss to Timothy Bradley Jr. in a welterweight world title fight, he seemed convinced he was done. But his wife, Vicky, told him he better get boxing out of his system because she didn’t want him coming back many years later.

So Rios, a former lightweight world titleholder who was for several years one of boxing’s most exciting fighters, made the decision to return to the ring. However, it has taken time.

His management contract with Cameron Dunkin expired as did his promotional agreement with Top Rank. He also parted ways with trainer Robert Garcia, deciding he needed a new voice in his ear.

Then some fights fell through, including a long-discussed grudge match with former welterweight titlist Victor Ortiz, who hemmed and hawed before finally electing not to finalize the bout.

“I’m just ready to get back to the top. I know that I have to climb the ladder and that’s what I’m here for. When I said that I was done, I was done. Eventually though I started getting that urge again, to get on that stage and perform on TV.”

But Rios said he continued to train with new trainer Ricky Funez and now he is finally set to return the ring, which he will do in a scheduled 10-round welterweight bout against 28-year-old Aaron Herrera (32-6-1, 21 KOs), of Mexico, in the main event of a Premier Boxing Champions card on Sunday night (Fox Sports 1/Fox Deportes, 10:30 p.m. ET) at the Pioneer Event Center in Lancaster, California.

“I’m just ready to get back to the top,” Rios said at a media workout this week. “I know that I have to climb the ladder and that’s what I’m here for. When I said that I was done, I was done. Eventually though I started getting that urge again, to get on that stage and perform on TV. My wife told me that if I wanted to fight again, I had to come back dedicated.”

Throughout his career, dedication to training has been an issue. Rios (33-3-1, 24 KOs) lost his lightweight title on the scale for failing to make weight in 2011 and in his next fight, in 2012, he missed weight again, costing him a chance to fight for the vacant title.

There have been other fights where he also did not show up in optimal condition. But Rios, who has faced the likes of Manny Pacquiao, Bradley and Mike Alvarado (three times), swears that he has taken this comeback seriously and gotten into top condition.

“I feel like I’m in really good shape after working with a nutritionist for the first time. My nutritionist is with me 12 hours a day and it’s had me feeling great heading into this fight,” Rios said.

Funez said Rios has done his work to get ready the right way.

“Training Brandon was a good challenge for me, but he has been disciplined from the very start,” Funez said. “I laid it all out for him from the beginning. I just wanted a good response from him and he said he’s going to work hard.

Former lightweight world titlist Brandon Rios will have a new trainer in Ricky Funez when he returns to the ring on Sunday. Photo provided by Mikey Williams/Team Rios

“A lot of people said that he was done, and that motivated me. I’ve seen [trainer] Joe Goossen bring fighters back like Diego Corrales and he’s my mentor in this sport. I’m working hard to push Brandon and get him to that level. Brandon is a stubborn fighter, but he really does listen. He has a lot of tools and I think you’ll see that he hasn’t lost anything in that ring on Sunday.”

Rios said leaving Garcia, known as one of the best in the business, was nothing personal.

“I love the guy. We had great chemistry. We became brothers,” Rios said. “I think we became too close. He would tell me something and I wouldn’t do it. I probably needed a fresh voice. I talked to Robert face to face and told him and he understood. We left on good terms. I talked to him like a man.

“There’s nothing against Robert Garcia. I respect him and he got me to where I am today, but I felt like I got too used to that situation. I told Ricky Funez that I wanted to come back and have him train me and, thankfully, he was excited to work with me. We started working really hard and we took some time to get to know each other more and more.”

So how did Rios, 31, of Oxnard, California, find Funez?

True story: “I Googled ‘Southern California boxing trainers’ and Ten Goose Boxing (Gym) and Ricky came up, and I decided to hit him up,” Rios said. “So I direct messaged him on Instagram and the rest is history.”

In the opening bout, a scheduled eight-rounder, junior welterweight prospect Jose Miguel Borrego (12-0, 11 KOs), 19, of Mexico, will face Kevin Watts (11-1, 4 KOs), 25, who will be fighting in front of his Lancaster hometown fans.