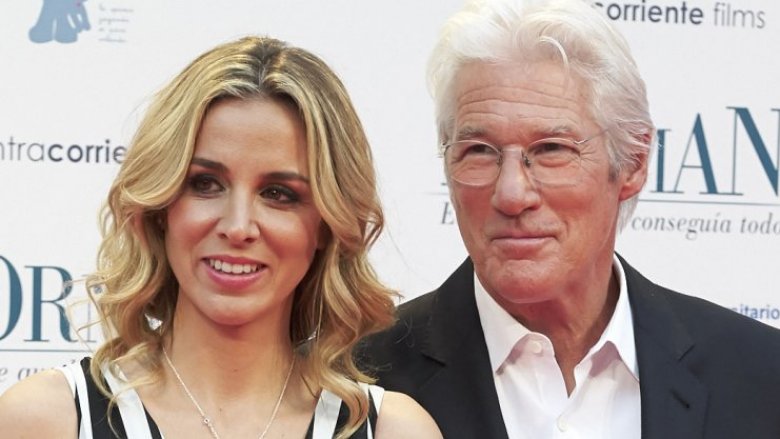 Congratulations are in order for actor Richard Gere and his wife, Alejandra Silva!

On Sunday, Sept. 16, 2018, Silva took to Instagram to confirm recent reports that the two are expecting their first child together.

“A very special moment just a few minutes ago,” she wrote in both English and Spanish, captioning a snapshot of herself and Gere, who’s a practicing Tibetan Buddhist, meeting the Dalai Lama in Rotterdam, the Netherlands. The publicist and activist added, “Getting blessings for our precious to come.. we couldn’t announce it before telling HH Dalai Lama.”

As Nicki Swift previously reported, Gere, 69, and Silva, 35, tied the knot in early April 2018. “I have found the quiet and happy life that I have always sought,” the Pretty Woman star told HOLA! at the time, while Silva added, “I was a little lost, without light, and knowing him gave meaning to my life. It was feeling that someone was reaching out and showing me my true path.”

While the happy couple have reportedly known each other for over ten years, they only started dating in 2014, People magazine reported around the time they got hitched. Gere and Silva’s nuptials marked the movie star’s third marriage. He was previously married to supermodel Cindy Crawford and actress Carey Lowell, with whom he shares 18-year-old son Homer. Meanwhile, Silva shares 5-year-old son Albert with ex-husband Govind Friedland.

In recent weeks, a number of other celebrity pairings have shared exciting baby announcements of their own — including Teen Mom stars Catelynn Lowell and husband Tyler Baltierra. Just last week, the couple revealed that they’re expecting their third child together after suffering a miscarriage not too long ago. “The big news is that we are expecting our rainbow baby. This baby is our rainbow after the storm,” Lowell recently told Us Weekly, adding that, while her pregnancy was “very unexpected,” she’s “super excited.”