Review will crush my friendship with Ajimobi — Balogun 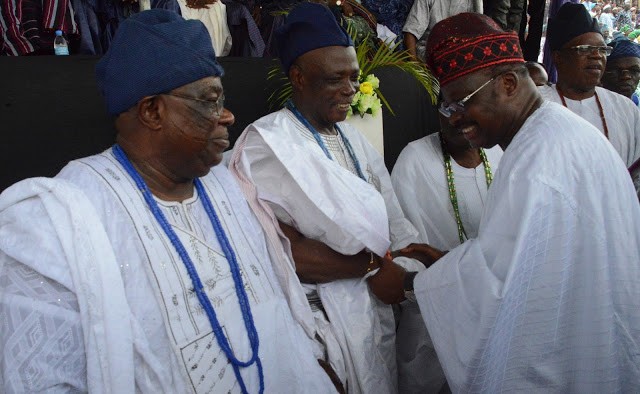 The Otun Olubadan of Ibadan, Chief Lekan Balogun tells OLUFEMI ATOYEBI that Governor Abiola Ajimobi did not consult with the Olubadan-in-Council before deciding to review the 1957 chieftaincy declaration of Ibadan

You and former governor of Oyo State, Rashidi Ladoja, took Governor Abiola Ajimobi to court over plan to review the Olubadan chieftaincy declaration. What informed your decision?

He (Ajimobi) is someone who is very close to me and we shouldn’t be meeting in court. But about seven high chiefs of Ibadan summoned a meeting and they chose my house as a base. They considered seniority by their action but I felt quite embarrassed.

All of them supported the idea of going to court over the matter especially when the panel set up on the matter will soon stop taking memoranda from members of the public. The lawyer called me and said that many of the high chiefs had chickened out. He said they were no longer willing to be part of it (litigation).

When the lawyer informed the Osi Olubadan, Senator Rashidi Ladoja, about the latest development, the former governor told the counsel to put my name and his own in the suit. Meanwhile, about two weeks earlier, I had made frantic efforts to see the governor so that I can discuss the issue and some other things with him before the pronouncement. I sent him a text message to show that I tried to see him, even before he made the announcement.

However, he was not reachable at that period. I was going to ask him how he could have made such an announcement without personal consultation, at least with me. That was how the idea of going to court started and the suit contained the names of just two people. Everybody was involved in the beginning but overnight they chickened out. If Ladoja would respect me, who am I to say no I won’t? It’s just an honour, banking on a brother to do the right thing always. So, that was how it came to be that it was only two of us that took the matter to court.

Has the governor ever discussed this issue with our before?

The governor had raised the issue on two occasions and I immediately took it up with him even though we are so close. I told him the Olubadan chieftaincy system is self-reforming. There are two key areas when you talk about reforms; the age of the Olubadan and the education of the Olubadan. In today’s Olubadan-in-Council, there is no person that is not a graduate or well educated. It was not so in the past. In today’s Ibadan there are mogajis who are under 40 years old and I will use as example of my own family, the Alli-Iwo’s family.

I remembered there was a meeting and I was on my seat and these elders will come and start prostrating for me and I always felt embarrassed. I protested against the practice one day but one of the elders in the family scolded me. He said they were not respecting me as a person but the forebears who enthroned me as the mogaji and since that day, my views changed.

A lot of them who are older than me are still alive. Nobody told the Alli-Iwo family to redefine and change their selection process and the content of the selection, so I told the governor that the system itself is self-reforming, it doesn’t require anybody to try to bring about any formal resolution.

Before I became the mogaji of Alli-Iwo, the problem with some mogajis was that they could only write their names in Arabic. One or two of them had been produce merchants, they would even sign their produce papers in Arabic; my father was included.

Are you saying Ajimobi’s proposed reform has naturally found its way into the system?

In a family where the oldest man used to be the mogaji, and now one of the youngest persons is chosen as mogaji, isn’t that system self-reforming? Life itself is dynamic. I believe that life goes through a process to reform itself. Only when there are fundamental deformities do you talk about setting up a committee to reform a system.

I have mentioned the area of education and age. Today, everybody in Olubadan-in-council is highly educated. Finally, the history and tradition of the people determine how these things work. Ibadan was founded by warriors and the glory of the founding fathers was to be shared by the families whose leaders founded Ibadan.

That is why I don’t understand the governor. He is my younger brother and very good friend, but it is like this issue has crushed our relationship. But if we want to quarrel, let’s quarrel. But let’s be sure we get our facts right. Meanwhile, he has been fed with wrong information on the matter.

You said he is your brother but you took him to court. Why not dialogue over the matter?

I should have been the last person to challenge him in court. The court is not there to fight; it is a democratic weapon that would say this thing should not be done that way but this way. And if he had consulted, I would have said to him what I am saying now. I would have resisted it privately and advised him against it.

Meanwhile, some people with subjective disposition will dabble into it and start interpreting his intention wrongly. They would think he is clearing a way for them because they think they are young. The high chiefs themselves set up a three-man committee and they have taken a decision  of what would happen, I am not saying they have agreed with the state government but they agreed that necessary consultations should have taken place first before the pronouncement.

The olubadan-in-council initiated a meeting with him and that was the first opportunity for consultation. Anybody who says he consulted us before the pronouncement is not speaking the truth. There was no prior consultation and we are the people who are directly involved in the matter, if he had consulted us, we would have advised him appropriately on the matter.

Have you met and asked the high chiefs that backed out of the initial agreement why they did so?

Two of the three high chiefs we sent to him were part of the initial meeting that took place in my house. Even though I wasn’t the one who suggested my house for the meeting but I had to agree since all the other chiefs agreed so.

Is it stated that whoever wants to reform the 1957 declaration must meet with the olubadan-in-council or the Olubadan before going ahead?

It was an act of rudeness not to consult. He could have called me to say this is what he wanted to do and we would have said this is how it should be done if it must be done at all. Maybe, all the hullabaloos wouldn’t have happened. I said he was very close to me until this incident. I don’t want to say how close we were but we were very close.

If the governor goes ahead to have his way, what implication will it have on the uniqueness of Ibadan as a city in terms of ascendancy to the Olubadan throne?

It will destroy the uniqueness of Ibadan. Ibadan is a place where I see God at work in our chieftaincy system, we had at one or two occasions installed very young people as the Olubadan. They got there early but God decided they were not going to stay long. One was there for just six months, another for two years.

That was prior to the emergence of the immediate past Olubadan (Oba Samuel Odulana). He was in his 90s when he got there. Mere looking at him then, nobody would have thought he would go beyond one year but Baba Lana was there till last year. He clocked 101 years old on the throne. The person you least expect to be Olubadan will be Olubadan. His reign was peaceful, dynamic and fantastic. You can’t do this mechanically. God does it for whom he pleases and for whosoever he wants to do it for. This plan (of Ajimobi) will introduce rancour. Let me not say more. Let me say the rest to him privately.

One of the things the governor is saying is that there should be more obas who are going to be under the Olubadan. What is your comment on this?

What the governor is saying is that each of the 11 presiding chairmen of the traditional council in all the 11 local governments in Ibadan will become king. Can you imagine the confusion that would ensure if I become an oba in Mapo when everybody knows that I am from Alli-Iwo. But as a high chief and a major player in Ibadan chieftaincy hierarchy if God deems it fit to make me an Olubadan, everybody knows that I belong to the whole of Ibadan.

When you start sectionalising it, then your identity will be questioned. Imagine Ladoja becoming an oba in Ibadan South-West, won’t the people ask him where he is coming from? They accept us as the local government traditional council chairmen; it is not the same thing as becoming an oba in their area.

Some think the baales in those areas will naturally become obas?

No, that is not what he meant to say. It tells you how complex the whole thing would be. Already some of them (baales) are calling themselves what they are not. The baale of Iddo and that of Egbeda and so on are doing it and it is annoying to the people who know the history of Ibadan. We have made moves to stop the baales who localise their titles. The whole land belongs to Olubadan. There is no Onido of Ido or Elegbeda of Egbeda because they are agents of the Olubadan. They are traditional chiefs.

Will this reduce the power of the Olubadan?

It is a matter of practice. If Ife has many kings under the Ooni, that is their own practice. The present system in Ibadan is our nomenclature.

After 60 years, don’t you think the declaration is due for a reform?

I just told you that the declaration is naturally reforming itself.