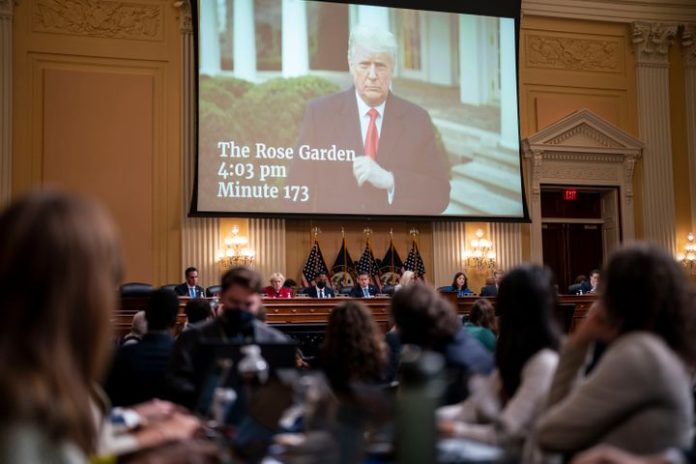 A group of retired four-star generals and admirals from the U.S. armed forces condemned Donald Trump in a joint article about the former president’s “dereliction of duty” before and during the U.S. Capitol riot.

The Jan. 6 House select committee produced “many startling findings,” but none were more alarming than the fact that Trump “abdicated his duty to preserve, protect and defend the Constitution” while rioters were ransacking the Capitol on Jan. 6, 2021, seven former military leaders wrote in an editorial published in The New York Times.

The authors highlighted how, in the weeks leading up to the insurrection, Trump’s allies urged him to hold on to power by ordering the military to seize voting machines and supervise a do-over of the 2020 election.

“Such an illegal order would have imperiled a foundational precept of American democracy: civilian control of the military,” the military leaders wrote. “Americans may take it for granted, but the strength of our democracy rests upon the stability of this arrangement, which requires both civilian and military leaders to have confidence that they have the same goal of supporting and defending the Constitution.”

“The president’s dereliction of duty on Jan. 6 tested the integrity of this historic principle as never before, endangering American lives and our democracy,” the military leaders added. “The lesson of that day is clear. Our democracy is not a given. To preserve it, Americans must demand nothing less from their leaders than an unassailable commitment to the country over party — and to their oaths above all.”

The article was published before Thursday’s prime-time select committee hearing, which detailed what Trump did for more than three hours as a mob of his supporters stormed the U.S. Capitol to try to stop Congress from certifying the results of the 2020 election.

Multiple aides testified that Trump remained in a private dining room off the Oval Office watching TV during the violence. His former deputy press secretary, Sarah Matthews, said he could have walked to the press briefing room in less than 60 seconds to make an announcement, but chose not to.

She also said that Trump had not wanted to mention “peace” in a tweet to supporters during the riot. He eventually agreed to say “stay peaceful” after his daughter Ivanka Trump proposed the phrase.

Also reading: From Bethenny to NeNe to Camille! ‘Real Housewives’ Who Left and Returned