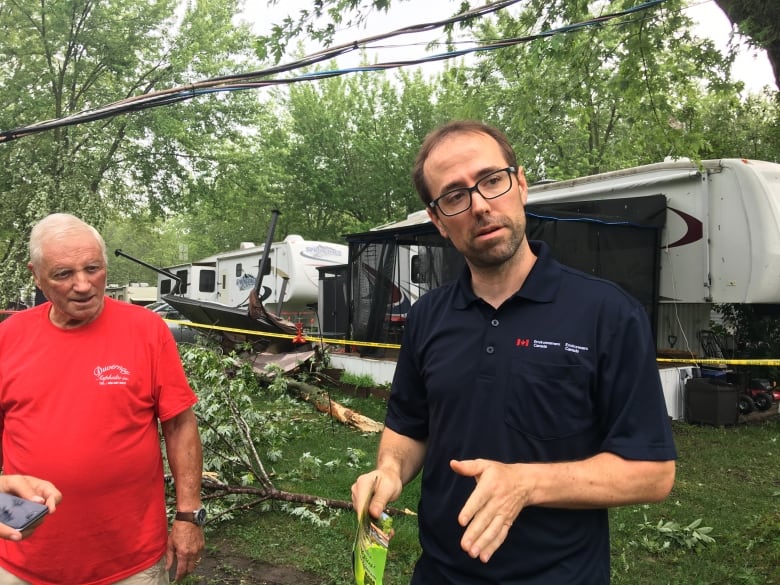 Camping Horizon resident France Girard said things are generally all right in her home since it’s powered by a generator. (Lauren McCallum/CBC)

Flipped vehicles, downed power lines, snapped trees and a shed that lifted off the ground all make a strong case that Quebec was hit by a tornado Thursday, says Environment Canada.

“There was a [shed] that got lifted up into the air and displaced several tens of metres,” Environment Canada meteorologist Alexandre Parent said.

Hours before the storm swept through the southern part of the province, the weather agency already knew all the ingredients were present to cause a tornado — heat, humidity and “lifting” caused by a cold front.

Meteorologists were on the ground investigating.

Parent said the agency will know by midday Friday whether the storm included a tornado, and if so, its intensity.

More than 50 teams worked to restore power Thursday evening, and others were added during the night.

The main regions still affected by blackouts are Montérégie, Lanaudière, Outaouais and Laval. 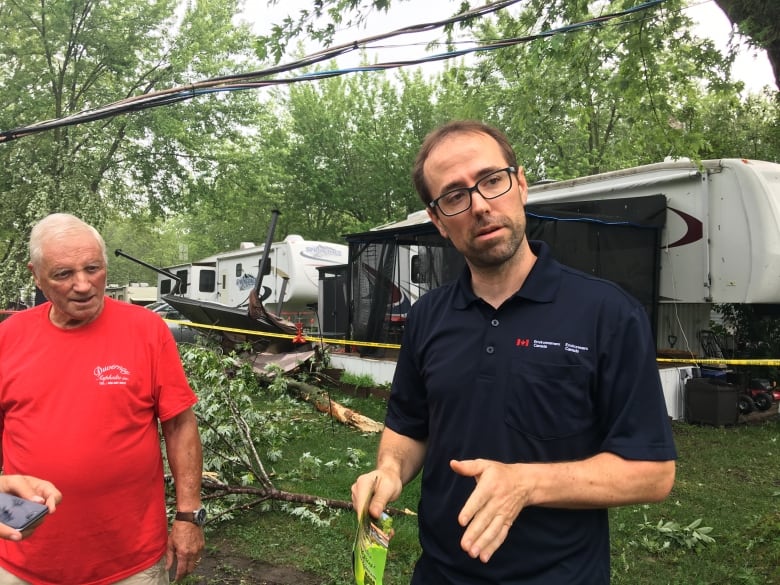 Meteorologist Simon Legault is working to determine if Quebec’s Lanaudière region was hit with a tornado Thursday evening. ( Lauren McCallum/CBC)

At Camping Horizon, about 30 minutes from Montreal in the Lanaudière region, residents are considering themselves lucky that so few of them were injured.

Most of the residents had emptied out of the campsite before the storm hit so they could attend a public consultation about a small airport being planned in the region.

Phone calls started coming in about the devastation at their homes, and they left the meeting to check things out.

“Trailers flipped over, trees came down,” said Alexandre Caron, the owner of Camping Horizon. He said hehas seen strong winds before, but never like this.

About 25 mobile homes on the property were damaged.

“We were scared when we saw that. We were lucky, despite it all,” said campground resident France Girard.

There was only one injury at the campground — a man who was in his mobile home during the storm sustained an ankle injury and was taken to hospital.

Caron said there may have been more injuries if most of the residents hadn’t been at the meeting.

He said when Hydro-Québec restores power to the area, they’ll “be up and running.”

“We’re going to put our gloves on and start cleaning up.”

According to Environment Canada, tornados aren’t exceptional at this time of year — half a dozen hit Quebec annually, with July being the biggest month.

Parent said there has already been one tornado in the province in 2019.