Residential schools: How the U.S. and Canada share a troubling history 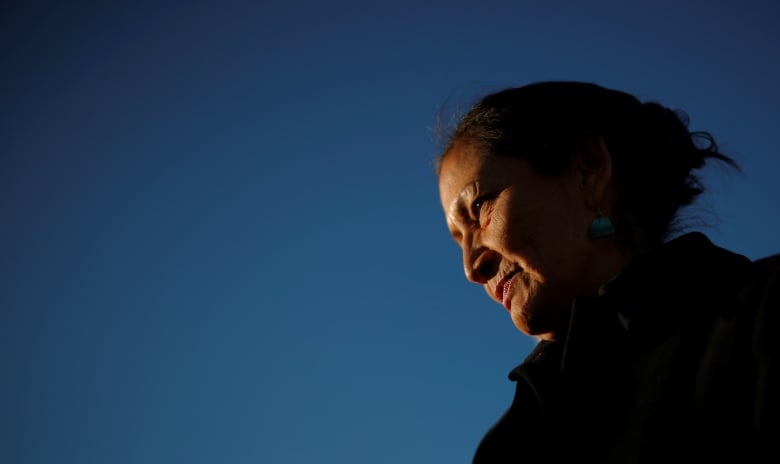 A member of the U.S. federal cabinet says she wept when she heard news from Canada about what are believed to be unmarked burial sites of children’s remains near a former residential school.

The news made Deb Haaland think of her own Pueblo ancestors such as her grandmother, who as a girl was taken from her family, put on a train and placed in the American version of a residential school for five years.

The New Mexico politician now leads the federal department that ran U.S. assimilation schools — she’s the first Indigenous person to do so.

And she’s launched an investigation into their legacy.

In a memo last month to the Department of the Interior, she said the news from Canada should prompt a reflection on what Americans refer to as native boarding schools.

She requested a report by next year on the schools, their cemeteries and on the possibility of finding unidentified remains.

“I know that this process will be painful. It won’t undo the heartbreak and loss we feel,” she said in a speech announcing the initiative.

“But only by acknowledging the past can we work toward a future we’re all proud to embrace.”

It’s only fitting that movements to assess the legacy of assimilation schools in both Canada and the U.S. should occur simultaneously.

That’s because they’ve been intertwined from the start. That point was made several years ago in Canada’s Truth and Reconciliation Commission report.

2 countries with a shared history

An architect of Canada’s residential schools policy, in a 1879 paper, looked at boarding schools just established in the U.S. and urged Canada to create similar ones.

On the basis of that paper from Nicholas Davin, Canada’s federal government opened three such schools, starting in 1883 in the future province of Saskatchewan.

Both countries borrowed ideas from reformatories being constructed in Europe for children of the urban poor, said the Truth and Reconciliation report.

Haaland’s great-grandfather was taken to the institution that most influenced Canada’s program: the now-defunct Carlisle Indian Industrial School in Pennsylvania.

The founder of that school, army officer Richard Pratt, infamously voiced the philosophy behind his program: “Kill the Indian [in him] … and save the man,” meaning Indigenous peoples should be assimilated, not exterminated.

That philosophy inflicted waves of trauma on families.

‘Our house was a battleground’

Warren Petoskey, a Lakota and Odawa man from Michigan, said one generation of children would be separated from their parents, and it affected their own parenting of the next generation.

He said his father wouldn’t talk about his experiences at a boarding school — just like his grandfather before him refused to.

Petoskey said his aunt was slapped in the face by a teacher for speaking her mother tongue, and another woman he knows was punched and suffered lifelong damage to her jaw.

His aunt also described how a janitor would sexually abuse female students, one of them a member of his family he says was scarred for life.

“I never could understand growing up why our family was so dysfunctional,” said Petoskey, 76.

“Our house was a battleground.”

Petoskey has spent a lifetime trying to learn his ancestral language, Anishinaabe, which his father refused to teach him.

Taught to loathe own culture

Students were taught to hate their own culture.

It’s not just that lessons presented a rose-tinted version of American history that glossed over uncomfortable details, like Thomas Jefferson’s Declaration of Independence — which talks about all men being created equal and then refers to Indigenous peoples as “merciless Indian savages.”

It was occasionally rendered more explicit.

In South Dakota, James Cadwell recalls that at his church-run boarding school, decades ago, students were assigned to read books that referred to Indigenous peoples as savages.

“I’ve often thought, as I’ve gotten older, ‘How detrimental was that to me as a young man?’ ” Cadwell said in an interview.

Then there were rumours, Petoskey said, about children who died while at the schools and were quietly buried.

A project is underway to discover whether there were any deaths covered up at the Michigan school Petoskey’s father attended, the Mount Pleasant Indian Industrial Boarding School.

The ​​Saginaw Chippewa Indian Tribe is working with archeological researchers to better understand the history of the property that once housed the school, which operated from 1893 to 1934.

The official record shows several children died while attending the school. Yet the tribe’s own research raises broader questions: there’s no record for 227 students who were enrolled there ever returning home.

Frank Cloutier, a spokesman for the tribe, said there are several possible explanations: children might have run away, documents might have been lost or perhaps something more sinister occurred.

“We don’t want to jump to those conclusions,” said Cloutier.

“We’re not naive in thinking that there won’t be any discoveries. But we want to handle this methodically and with some reverence and respect.”

He said the news headlines from Canada helped raise awareness of the issue.

Ceremonies to repatriate the remains of children were already underway at the native boarding school founded by Pratt, Pennsylvania’s Carlisle school.

The Unangax̂ girl was taken from Alaska and spent five years at the school between 1901 and 1906, although, Peters said, she was rarely in a classroom and was mostly loaned out as a domestic worker.

The girl contracted tuberculosis and died. On her tombstone at the school, her name was misspelled and her tribe was misidentified.

This month, Peters saw to it that her relative was buried at home, in Alaska, in the same cemetery as her family, by a church on St. Paul Island.

She said she was deeply moved during the ceremony.

Peters, a doctoral student in Native American studies at the University of California, credits a group of schoolchildren for starting the repatriation project.

She said the Rosebud Sioux students were struck by the cemetery they saw when they stopped during a field trip at the site of the Pennsylvania school, which closed in 1918.

“Out of the mouths of babes — they said: ‘Why are they still here? Why can’t we take them home?’ ” Peters said.

“And that really started the process with the [U.S.] army,” which now owns the site. Relatives can file paperwork to move remains.

Peters said Americans should brace for news similar to Canada’s about undocumented deaths. In fact, she said: “I think it’s going to be way worse,” because there were many more Indigenous boarding schools in the U.S., more than 500 in all.

What will U.S. inquiries find?

The author of a book on the history of American Indigenous boarding schools said he’s not certain the U.S. will find as many unmarked graves as appears to be the case in Canada.

“It remains to be seen,” he said in an interview.

Yet his book, Education For Extinction, chronicles in detail the coercion, abuse and deaths that did occur in these U.S. schools.

By 1926, more than 80 per cent of Indigenous school-age children were attending boarding schools in the U.S., Adams wrote.

The system was scathingly criticized in a 1928 think-tank report and again in a congressional study led by Sen. Robert Kennedy published after his death.

“We are shocked at what we discovered,” said the 1969 report, Indian Education: A National Tragedy, A National Challenge.

“Others before us were shocked. They recommended and made changes. Others after us will likely be shocked.”

It called the treatment of Indigenous peoples a stain on the national conscience.

Around the same time, in 1968, President Lyndon Johnson gave a speech titled The Forgotten American.

He demanded an end to assimilationist policies and a shift toward self-determination. Johnson earmarked funds for community-driven curricula. A landmark 1975 law then shifted authority for government-run schools to the tribes.

Once, children were beaten for speaking their ancestral language.

He recalls being a traumatized student, over a half-century ago, at a church-run boarding school in South Dakota.

He would cry himself to sleep during thunderstorms, with nobody to console him.

He recalls an alcoholic priest who drank while driving kids around — the priest told them to keep quiet about his drinking,and let them smoke cigarettes.

“If you fell and hurt yourself, the nurturing was not there at all. There was no nurturing.”