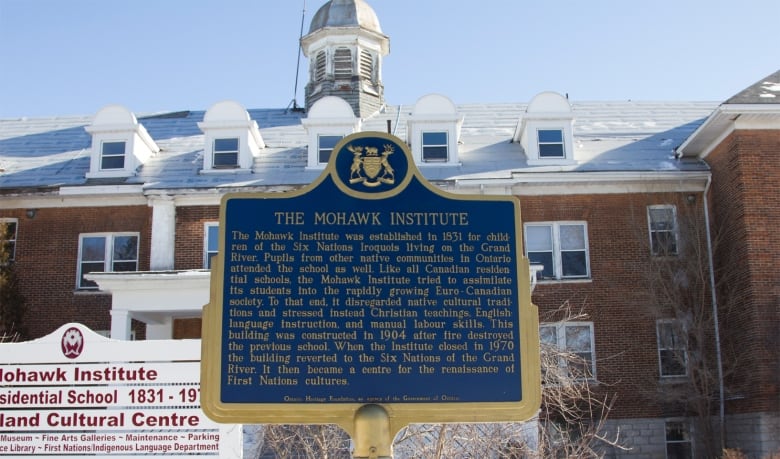 For years, Geronimo Henry carried a folding “travelling wall” bearing some 1,500 names of children like himself who were forced to attend the Mohawk Institute Residential School in Brantford, Ont.

Henry spent 11 years at the school. Throughout the early 2000s, he carried the students’ names to colleges and universities, describing what life was like there and what it took to survive.

“I talk for the ones that can’t talk about their experiences at the school and more so with the ones that have passed away since they left there,” he said.

Now, Henry has a dream: To make the wall permanent.

He hopes to raise $50,000 to set up the memorial on the institute’s former grounds, which are now home to the Woodland Cultural Centre. A GoFundMe campaign was started earlier this month.

A spokesperson for the centre said it supports Henry’s efforts.

“We already display his first memorial project from many years back,” Layla Black, programming and marketing supervisor, said in an email.

In Henry’s mind, the wall is made of black marble and stands two metres high, with each name spelled out in white letters.

Like the creator of the wall, it will speak for those who can’t.

“It will be a monument there of all the kids that went there.”

Day and night, visitors can learn about the wall’s past, he said. “It will be on display to all people, friend and foe alike.”

“This is about humanizing people — residential schools, the Indian Act, all these things that have been going on and are still going on … have been about dehumanizing,” said Jodie Williams, who co-chairs the First Nation, Métis, Inuit, Education Association of Ontario, and is working Henry to see his dream built.

A memorial wall isn’t a lot to ask for, considering all he has been through, she said.

‘A prison for children’

Henry said his mother put him, along with his brother and two sisters, into the residential school run by the Anglican Church.

His sisters only stayed a short while; his brother survived five years before running away without being caught, he said.

While some children went home for summers, Henry said his mother never came to get him, so he stayed year round.

“It kind of ruined my whole life. It’s like somebody getting out of prison for 11 years,” he said. “We were just new to the outside world. We were imprisoned. That’s what I call it. It was a prison for children.”

Henry, who is from the Cayuga nation and a member of the Bear Clan, said his family held traditional Indigenous beliefs, but those were stolen from him at the school, as were his language, culture and ceremonies.

But perhaps what he remembers most is the hunger.

The Mohawk Institute is known by survivors as the Mush Hole, named for what children were fed.

Despite having a farm on site, where students were forced to do daily chores, Henry said they were always hungry.

Every morning for 11 years, he was served a plain slice of bread, a glass of skim milk and oatmeal that had been boiled down to a “sticky, slimy” mush, he said.

When the City of Brantford opened a landfill about a 20-minute walk from the school, Henry said, he considered it a blessing from the Creator.

“Because we were always hungry, we were digging in the garbage to get something to eat,” he said, adding children had to fight off rats and dodge the guard at the dump. “I hate to say it, but we maybe ate a little bit better out of the dump than we did at the school.”

Some areas of the former Mohawk Institute grounds have been searched for remains, but survivors and Six Nations elected Chief Mark Hill have called on different levels of government to provide funding for radar to scan the entire site.

Hill has called for a criminal investigation and appeared in an announcement on Tuesday, when the provincial government pledged $10 million in funding over a three-year span to identify, investigate and commemorate residential school burial sites in Ontario.

The provincial announcement came in the wake of the Tk’emlúps te Secwépemc First Nation in B.C. revealing preliminary results from a survey of the grounds at the former Kamloops Indian Residential School that indicates the remains of an estimated 200 children could be buried there.

That discovery marked a “bitter renewal of grief” for Six Nations members, said Hill, noting there have long been “whispers” of missing children.

“It is past time that we find them and bring justice.”

For his part, Henry supports the call for a complete search of the premises.

“There’s always stories floating around, even when I was there. Kids used to run away … constantly, and sometimes they wouldn’t even get home, so where did they go? What happened to them?”

Since the remains were detected in Kamloops, Henry has spent his weekends parked at the former residential school he was forced to attend for so many years.

He said he goes there to answer questions from visitors about the students and what happened there.

Some day, he won’t be able to do that anymore, but he hopes the wall will be there to keep telling their stories.

Support is available for anyone affected by their experience at residential schools and those triggered by the latest reports.

Share
Facebook
Twitter
WhatsApp
Pinterest
Linkedin
ReddIt
Email
Print
Tumblr
Telegram
Mix
VK
Digg
LINE
Viber
Naver
Previous articleCanada’s inflation rate rises to highest level in a decade, at 3.6%
Next articleAs a Muslim and a teacher, I hope to be part of the change needed to overcome racism and hatred