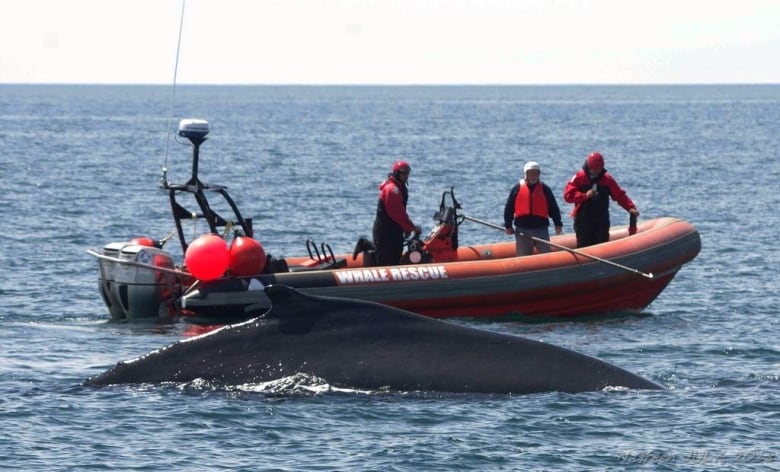 The Campobello Whale Rescue Team was able to partially disentangle a North Atlantic right whale in the Gulf of St. Lawrence on Thursday. (Centre for Coastal Studies/NOAA)

A rescue team in New Brunswick partially freed one of three entangled North Atlantic right whales in the Gulf of St. Lawrence this week.

The Department of Fisheries and Oceans said right whale No. 4423, a five-year-old male, was spotted around 10 a.m. local time on Thursday during an aerial surveillance flight by the U.S. National Oceanic and Atmospheric Administration (NOAA).

The Campobello Whale Rescue team removed fishing gear that kept the whale from using its tail when diving.

“Attempts to remove additional gear had to be interrupted at dusk,” DFO said in a statement.

The Campobello Whale Rescue Team headed into the St. Lawrence on Tuesday to locate the whales. The rescue team lost track of one of the whales because the plane that was monitoring it needed to refuel and had to go back to land.

Officials have said the windy weather has also been making it difficult to go safely into open water this week. 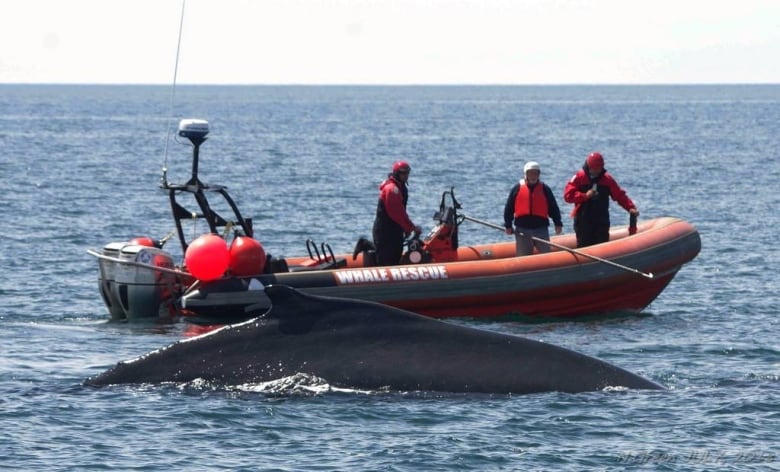 Members of the Campobello Whale Rescue Team in action in July 2018. (Submitted by Neil Green)

During Thursday’s rescue, the whale team also received air support from NOAA and DFO’s Conservation and Protection airplanes, on-water support from fishery officers, as well as a research vessel from the New England Aquarium.

The whale was spotted entangled on July 4, east of Miscou Island. But officials believe the animal was stuck prior to entering Canadian waters.

Initial reports indicate it could be a whale first sighted entangled in April 2019, in U.S. waters, DFO said.

Surveillance flights continued searching for the two other entangled right whales that were recently seen in the Gulf of St. Lawrence.

No. 4440 has been spotted several times since it was first sighted entangled on June 29, but a disentanglement operation has not been possible.

The third entangled whale was first seen on July 4, 2019 by a Transport Canada surveillance flight east of the Gaspé Peninsula in Quebec. This individual whale has not yet been identified, DFO said.

“Locating these three whales is a challenging task,” DFO said in a statement.

“Right whales spend a significant amount of time under water, making it difficult to observe them from the air.”

DFO said search operations will continue depending on the weather conditions.

The measures include further reducing ship speeds in the area, increasing zones in which the speed restrictions will apply, increasing aerial surveillance and funding for initiatives to enhance marine mammal response.

This year, six North Atlantic right whales have been found dead in Canadian waters. Two were male and four were female. There are just over 400 right whales left in the world.