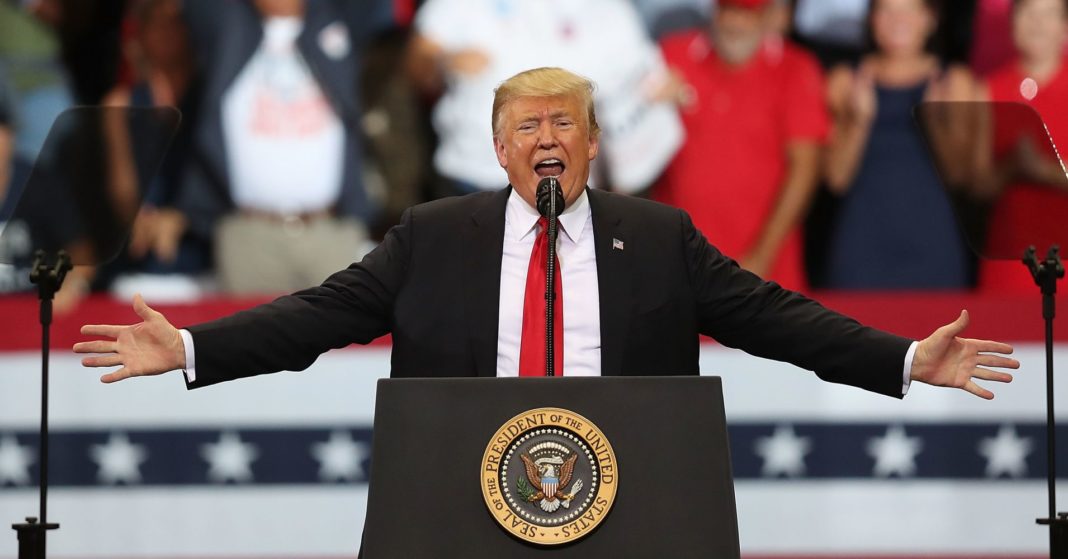 WASHINGTON – Fighting to preserve the all-Republican government, President Trump and his party have wielded a closing election message of fear.

But the upstairs-downstairs split within the Republican coalition requires more than hype about imagined threats of “invasion” from a bedraggled immigrant caravan. GOP strategy involves two distinctly different kinds of fear.

For the party’s base of conservative white voters – especially older, less-educated ones in small-towns and rural areas – it’s fear for their personal safety. So Trump and his allies warn baselessly that impoverished Central American immigrants may bring crime, terrorism and exotic diseases into the U.S.

The crudest expression is the nakedly racist video Trump tweeted this week linking Democrats with a chortling Latino murderer. But Republicans aligned with House Speaker Paul Ryan deploy less-raw versions of the same idea against various Democratic candidates, portraying an ex-CIA agent as a teacher of Islamic jihadis, a black Rhodes scholar as a frightening hoodie-clad rapper and an Ohio county official of Indian-Tibetan descent as linked to Libyan terrorism.

For those voters, Republican leaders highlight fear for their pocketbooks. That means warnings of Democratic tax increases and, more ominously, seizure of private property from the rich.

Last month, the White House Council of Economic Advisers issued a report highlighting “The Opportunity Costs of Socialism.” Invoking Lenin’s Russia, Mao’s China and Castro’s Cuba, it likened Democratic criticism of the gap between rich and poor to Marxism.

The twin assertion of cultural and economic threats makes an oddly dystopian message for a time of strong economic growth. With America’s recovery from recession and financial crisis in its ninth year, Friday’s strong employment report showed rising wages and labor force participation in addition to 250,000 new jobs.

In 1984, President Ronald Reagan fashioned similar data into an upbeat “Morning in America” re-election campaign. But 21st century Republicans have not, for reasons that go beyond Trump’s truculent personality.

The continuing march of income inequality undercuts broad appeals to prosperity. Candidate Trump recognized the issue’s potency with his vow to eliminate special tax breaks for the rich, such as “carried interest” for financial executives that he accused of “getting away with murder.”

During the Obama presidency, such proposals for higher taxes on the wealthy terrified Wall Street. “It’s like when Hitler invaded Poland in 1939,” Blackstone’s Stephen Schwarzman complained in 2010.

But with Republicans controlling Congress and the White House, Schwarzman had little to fear. The Trump/GOP tax cut did not eliminate carried interest. It delivered the greatest benefits to the wealthy.

Tax cuts for ordinary families – averaging $18 a week for the middle-fifth of American earners – have proven so small that many remain unaware of receiving them at all. That explains Trump’s impromptu pre-election promise of a new 10 percent tax cut for the middle class.

Divergent messages for different parts of the Republican coalition can create intraparty conflict. In 2017, sympathy Trump expressed for white supremacist marchers in Charlottesville, Virginia, produced such a backlash that Schwarzman and other business leaders disbanded a White House advisory council.

Battling for endangered suburban seats, one GOP leader recently blasted longtime Iowa Rep. Steve King over his criticism of diversity and links to the far-right fringe.

“We must stand up against white supremacy and hate in all its forms,” declared House GOP campaign chair Steve Stivers.

Wall Street executives, despite the robust economy, have shifted their campaign giving. In 2014 midterm elections, 62 percent of securities and investment industry donations went to Republicans; this year, 53 percent have gone to Democrats, according to the money-in-politics website opensecrets.org.

Yet other wealthy beneficiaries of Trump’s tax cut and deregulation policies keep financing Republican culture war messages. The insurance, retail, gambling, and oil and gas industries have all given a large majority of their donations to Republican campaigns in 2018.

Casino magnate Sheldon Adelson, whose company, Las Vegas Sands, reported a $670 million tax cut windfall in just the first quarter of the year, and his wife Miriam have given $50 million to the Ryan-linked Congressional Leadership Fund. Schwarzman gave $2.25 million in August, and another $1.5 million last month.