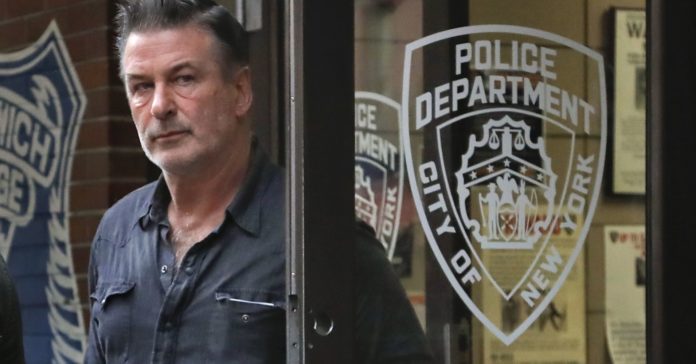 Hot-headed actor Alec Baldwin was arrested Friday after punching a man in the face in a dispute over a parking spot on the street, in New York City, police said.

The “30 Rock” star Baldwin was in custody after the incident in the East Village section of Manhattan.

Baldwin, who was released about two hours after his arrest, was charged with third-degree assault and harassment. He did not respond to reporters’ questions about the incident.

Sources told WNBC-TV in New York that the dispute involving the 60-year-old Baldwin was over a parking spot. The station said Baldwin hopped out of his car when the other man swiped the spot and punched him.

Police told CNBC that officers responded to East 10th Street at about 2 p.m. after someone called 911 to report an assault.

Police said that when cops arrived they saw the 49-year-old victim conscious and alert, but with an injury to his left jaw.

The victim was taken to a hospital in stable condition.

Baldwin, who has appeared in such films as “Working Girl,” “The Departed” and “Glengarry Glen Ross,” more recently has made news for his frequent scathing impersonations of President Donald Trump on NBC’s “Saturday Night Live.”

When Trump was asked by reporters Friday afternoon about the arrest of his nemesis, the president said, “I wish him luck.”

Baldwin previously has garnered headlines for an explosive temper.

In 2014, Baldwin was stopped and handcuffed by police in Manhattan after he was spotted bicycling the wrong way down a one-way street and allegedly cursed at officers. He was charged with disorderly conduct in addition to the violation of bicycling rules.

A year before that, Baldwin shoved a New York Post reporter against a parked car outside of the actor’s home in Manhattan.

“You don’t want to get hurt, do you?” Baldwin snarled at the reporter, former professional boxer Kevin Fasick, according to the Post, which has referred to the actor at “The Bloviator.”