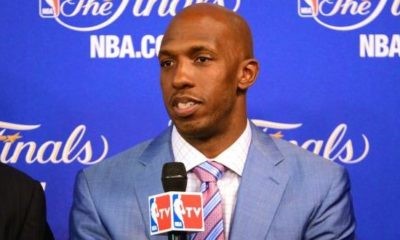 CLEVELAND (AP) — Chauncey Billups once competed against the Cleveland Cavaliers as a player. He could be joining them.

Billups met with team owner Dan Gilbert on Wednesday for the second straight day to discuss an executive position with the Cavaliers, who are regrouping after losing in the Finals.

Gilbert could be close to offering a job to Billups, according to a person who spoke to The Associated Press on condition of anonymity because of the sensitivity of the talks. Billups is the first person to meet with Gilbert since he parted ways with general manager David Griffin this week when talks about a possible contract extension broke down.

While the Cavaliers are looking for Griffin’s replacement after he guided them to three straight Finals, it’s believed that Billups would take on a different role, perhaps as the team’s director of basketball operations.

Billups has no previous experience as an NBA executive, but he does have a long-standing relationship with Gilbert from their time together in Detroit and he knows the league well. Billups, who was a five-time All-Star, also is close with Cavaliers coach Tyronn Lue.

The upheaval in Cleveland’s front office came days before Thursday’s draft and as the Cavs launched plans to retool their roster after being dethroned as champions in five games by the Golden State Warriors.

The Cavaliers currently do not own a draft pick, but that could change; the team has been involved in numerous talks in recent days.

Also, a splashy hire like Billups could relieve some of the external criticism being aimed at Gilbert, who did not offer Griffin a contract extension last summer and then denied other teams permission to talk to him about job openings during the playoffs.

Griffin had been Cleveland’s GM since 2014, taking over the team shortly before LeBron James announced he was re-signing with the Cavaliers after playing four seasons in Miami.