Renewed calls for Pope to visit Sask. to apologize for residential schools after 2017 effort failed 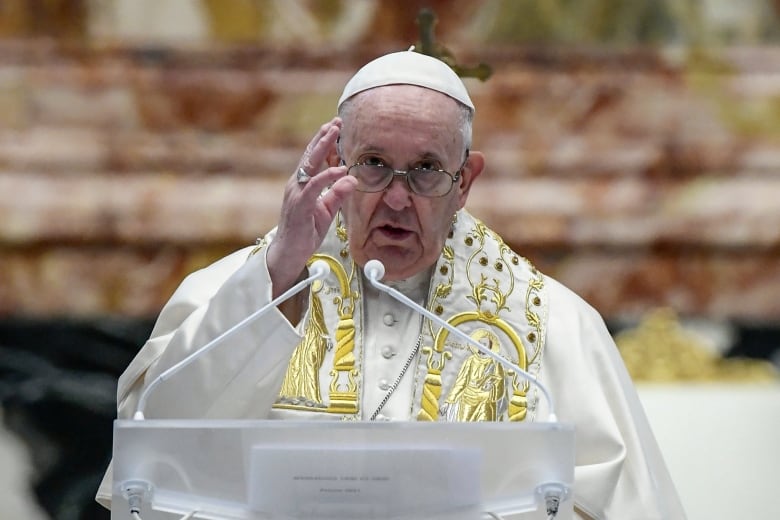 For a brief period in 2016, Chief Felix Thomas allowed himself to believe that Pope Francis would come to Saskatchewan.

“We were very hopeful. We thought it was going ahead,” said Thomas, chief of the Kinistin Saulteaux Nation.

Thomas and then-Saskatoon bishop Don Bolen, who is now archbishop of Regina, had worked for months building support across Canada among First Nations residential school survivors, church leaders and all levels of government to secure a papal visit to Wanuskewin Heritage Park, just outside Saskatoon.

There, the plan was that Francis would apologize for the Catholic Church’s central role in the Indian residential school system in Canada.

But their efforts failed, and Thomas said no reason was given.

“I guess they were just hoping people would forget about it,” he said Monday in an interview with CBC News.

Thomas is now joining a growing chorus demanding that Pope Francis reconsider after the recent discovery by British Columbia’s Tk’emlúps te Secwépemc First Nation of an unmarked burial site at the Kamloops Indian Residential School that the band says contains the remains of 215 children.

“It needed to happen then. It really needs to happen now,” he said.

Thomas agreed to share details of their extensive efforts, hoping it will motivate Catholic parishioners to join the fight this time. They want a papal apology on Canadian soil, a release of all residential school files and church records of abusive clergy, and the Catholic Church to pay the full $25 million it promised to survivors as part of a national settlement agreement.

“It’s one thing for us First Nations people to say this,” Thomas said. “But wouldn’t it be powerful if Catholics said, ‘I’m not going to go to my church until this is made right?'”

The Truth and Reconciliation Commission (TRC) released its six-volume final report on residential schools in late 2015. Aside from cataloguing the individual and systemic abuses perpetrated on more than 150,000 students and their families, the TRC called on the Pope to apologize on Canadian soil. The Catholic Church ran more than half of the country’s residential schools.

Thomas was chief of the Saskatoon Tribal Council at the time. After many conversations with survivors and First Nations leaders, an idea began to form. They would bring Pope Francis to apologize at Wanuskewin, a Cree word meaning “sanctuary.” The 5,000-year-old gathering place for First Nations people is now a UNESCO World Heritage Site.

Thomas said he saw Francis as a more progressive pope who has spoken out against climate change, Islamophobia and a host of other issues. Saskatchewan had more residential school students per capita than any other province. And, as the TRC report noted, the previous pope apologized in Ireland to abuse victims of six priests there.

He worked closely with Bolen, and Thomas said they solicited advice from elders and survivors to see what they wanted and how proper protocol could be respected.

Thomas said they had the full support of the Assembly of First Nations, the Federation of Sovereign Indigenous Nations, then-Saskatchewan premier Brad Wall and leaders at all levels of government.

They planned logistics. It would be the biggest, most elaborate event in the province’s history. They had worked out initial details of a fundraising campaign.

With all of this in place, Bolen and Thomas flew to Ottawa together and hand-delivered the pontiff’s invitation to the Vatican’s ambassador or “apostolic nuncio” to Canada at the time, Archbishop Luigi Bonazzi.

Bonazzi was receptive, and it seemed things were coming together. Shortly after, Bonazzi told CBC News that Francis would “make every effort” to come to Canada and that reconciliation was a top priority.

“If something wrong was done and something remains to be done, you do it,” he said in an interview at the time.

Three months later, in March 2017, Bolen raised the issue during a personal audience with Pope Francis during a larger meeting at the Vatican when he was archbishop of Regina.

A few months later, Prime Minister Justin Trudeau did the same during a visit to the Vatican.

Bonazzi eventually told them 2017 was out of the question, but he was confident the visit would still happen in 2018 or 2019.

Then there was silence.

Thomas said he never received a reply from the Vatican, and his hope slowly faded until he realized the visit wasn’t going to happen.

In March 2018, the group representing Canada’s bishops issued a public letter to “Indigenous Peoples of Canada” saying the Pope “felt that he could not personally respond.” It said the church is a decentralized organization and that it’s better for reconciliation to occur at the local level.

The House of Commons passed a nearly unanimous motion, introduced by the NDP and opposed by only a handful of Conservative members, calling for the Pope to come to Canada and apologize.

“We need to hear from the captain of the ship,” he said.

Thomas said he is particularly frustrated about the $25 million the church promised as part of a settlement agreement. Other churches involved in the settlement, such as the United and Anglican churches, paid their portions years ago, but the Catholic Church has left it largely to individual parishes and diocese to come up with the money.

Bolen and others said individual dioceses don’t have that kind of money. Church members were asked to contribute, but only $3.7 million had been paid from Catholic churches across Canada, according to the last publicly available figures.

Thomas said it would take only a fraction of one per cent of the Vatican’s vast wealth to meet its obligations to residential school survivors. The extent of the Catholic Church’s total wealth is not public, but Vatican officials released limited statements last year revealing $6 billion Cdn in Vatican Bank holdings.

Bolen said he was busy meeting with survivors and others on Monday and was not available for comment.

Thomas said the Catholic Church and Pope Francis need to take action and he’ll help organize a possible visit in any way he can.

“They played a role in genocide. They were trying to get rid of the Indian problem,” he said.

“This will be a continuing stain if they don’t do what’s right.”