Reader Question: How Do I Talk to My Husband About My Insecurities? 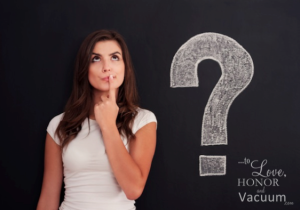 What do you do when you’re insecure and jealous as a wife?

On Mondays I like to post a reader question and take a stab at answering it. Today’s is from a newlywed (married 3 years) who has struggled with problems in their sex life. And as those problems drag on, she’s having a harder time putting his sexual past behind her.

When I was young I made the decision to save myself for marriage. When I met and married my husband, I knew that he had past relations but I was happy to be a part of his redemption story. Everything went as planned and we waited until the wedding night. I knew it would be painful but it was much more than expected. About month later it was still very painful, to the point that he could hardly enter. I went to a doctor only to find that I had vaginismus. That took several months to work thru, but after about a year I was pain free. Flash forward 2 years (so this is 3 years total) I am still not enjoying sex at all. I’ve done all of the exercises, read all of the books, stopped reading  the books to take a mental break from it. Nothing has made a difference. Sex has never felt bonding. I feel more bonded when we just hang out, and sex seems to make me feel at a distance. I’ve lost hope for a good sex life. This isn’t something that has ever really been on my mind before but lately all I can think about is his past relationships and how he has experienced something with women that he has not shared with me and that makes me feel inadequate. He often asks me what wrong and I just tell him it’s the same vaginismus stuff, but there’s more to it. I feel like I can’t talk to him about this because I don’t want to bring up his past. I believe that he was clearly remorseful and that he has already worked thru the issue and moved on. The tricky part, and totally irrational part, is that I have not moved on My question is, should I talk to him about it?

Isn’t that hard? This is really a three-pronged problem:

I’ve actually dealt with all three quite a bit, and so I’m going to put links to some great posts that can help you if you have any of those three problems, because I actually want to talk about something else today. I want to talk about how our thoughts often go haywire and we invite trouble in an area where we’re already struggling.

But first, some help.

If you suffer from vaginismus….

If you lack desire for sex at all, and can’t seem to see what all the fuss is about.

If you’re haunted by his past.

Reader question: How Do You Stop Obsessing Over Your Husband’s Past?

Okay, now the big issue: When We’re Feeling Like We’ve Failed, We Often Project That Onto Him

In my book 9 Thoughts That Can Change Your Marriage, I shared a recurring theme in our marriage where, when we were going through a bad patch, I would always get upset about one particular thing–even if that thing was not the problem at hand.

Here’s an excerpt from the Introduction when I explain how this happens:

Just recently, Keith and I were smack in the middle of one of those busy seasons where all our energy was channeled at keeping all the plates in the air from crashing down, and we didn’t have much left for each other. Keith had a huge block of time scheduled at the hospital (he’s a pediatrician), and extroverted me, who never handles solitude well, became a bit of a bear.

While Keith was away on call, I began chewing on an old hurt. I suffered many rejections as a child and teenager, but when I met my husband, I thought that finally I had a man who would love me completely just for being me. So I was shocked when cold feet caused him to call off our initial engagement. Thankfully the estrangement wasn’t long, but that rejection pierced me. When I walked through a season recently when it seemed as if fellow committee members and church friends and blog readers were all disappointed in me, those feelings of rejection came flooding back. And with it came the reminder of my husband’s long ago rejection of me.

And so when Keith’s long bout of hospital calls was over, I finally had an audience to vent these feelings. But it’s rarely a good idea to stay up talking about deep issues when you’re tired; you just blow things out of proportion. And I didn’t just blow them up. I stuck them in a cannon, fired at Keith’s weakest points, and came pretty close to cheering when I hit the mark.

We were feeling distant because he was gone so much. I was feeling insecure because of things happening to me outside of the marriage. And so I was feeling downright lousy. When I feel lousy, my mind tends to replay all the things I have to feel lousy about. And that’s when I start chewing on these old insecurities. In my case, I did lambaste Keith with them (and I have at other times in our marriage, too). I’ve had to learn that when I feel like doing this, it really has nothing to do with him.

Ask yourself: Is this issue something that is in my mind or in our relationship?

If you’re upset at your spouse, is the issue just in your mind or is it in your relationship now?Click To Tweet

Yes, Keith had hurt me, but it was in the past, he had dealt with it and was not acting like that whatsoever now. This was entirely in my mind.

It reminds me of this funny Tim Hawkins routine (start at 1:15 for the dream part):

If it’s an issue that’s just in your mind, then it’s up to you to deal with it.

2 Corinthians 10:5 tells us to take every thought captive to Christ. This woman is having a lot of thoughts pop into her head now about her husband’s past relationships. But here’s the thing: he can do absolutely nothing about those now. And she married him knowing about them! I think when you marry someone when you already know about their past, and when they have repented and put it behind them, then you don’t have a right to keep bringing it up. It just makes him feel guilty when he has already been forgiven by God and when there’s nothing he can do to change it.

When those thoughts pop into our heads, we don’t have to entertain them. Tell yourself, “My husband loves me. He chose me. We’re going to build a great marriage together.”

If the issue is in your relationship, then yes, you deal with it together.

If he’s contacting his exes on Facebook, or if he’s texting other women, of course you deal with it together. But if it’s an issue in your head, then your desire to have that conversation with him may be a deep seated desire to transfer pain from you to him.

This woman is  hurting. She waited her whole life for a great sex life. And she doesn’t have one! Meanwhile those women who were with her husband and who did everything the wrong way seemed to have more fun than she’s having now! It doesn’t seem fair.

So she’s upset and she’s insecure. Often when we feel insecure, we look for people to heap those negative thoughts onto so that we can get rid of them. But it doesn’t work.

When we’re insecure in marriage, we often lash out to make our spouse insecure, too.Click To Tweet

We needed to see each other as a team; She needs to see she and her husband as a unit, too.

Likely that is really difficult because she has no desire for sex and knows that this is a huge hurdle. Again, that’s why I really encourage her to check out my Boost Your Libido course, because it’s written just for women like her and I think it can help so much! Sometimes the problem is simply that we misunderstand what libido looks like for women.

When you feel as if you are causing a breach in your marriage, even if it’s not a breach that you’re deliberately causing (she’s not deliberately hating sex, after all), then you feel really guilty. And when we feel guilty, again, it’s very common to want to transfer that guilt to someone else.

Own your own issues.

That’s what it comes down to. For her, that means working on her libido and making a commitment to boosting their sex life. But it also means not blaming him for things that are present mostly in her mind, and not in their relationship.

Feelings of guilt, insecurity, and regret are hard to handle. It’s so tempting to try to unburden ourselves by unwittingly burdening someone else. But it’s the wrong thing to do.

Let yourself feel the guilt and insecurity. Don’t run from it. Examine those feelings and ask, are there things that I can do to change? A mature person doesn’t run away from the truth. A mature person feels it, examines it, and then asks God to help them deal with it and move through it.

Let me know in the comments: Have you ever found yourself rehashing an old issue that just won’t seem to go away? How did you handle it?