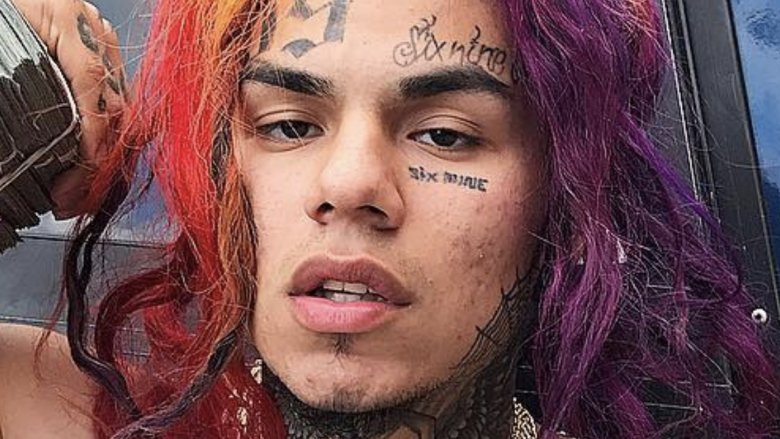 Tekashi69 (real name Daniel Hernandez) is reportedly in big trouble with the law.

TMZ reports that the rapper, his former manager Kifano “Shottie” Jordan — who he’d recently fired — and two other people with whom he’s associated were arrested on racketeering and firearms charges. NBC News identified the two other men who were arrested as Jensel “Ish” Butler and Faheem “Crippy” Walter.

According to TMZ, Tekashi69 was taken into custody by agents of the Justice Department’s Bureau of Alcohol, Tobacco, Firearms, and Explosives in New York City on Sunday, Nov. 18, 2018. The arrests are said to have been a “joint effort by ATF, NYPD and Homeland Security.”

The Daily Beast reports that prosecutors have accused Tekashi69, who’s also known as 6ix9ine, of being part of a “criminal enterprise” — specifically the gang 9 Trey Bloods.

As fans of the rapper may already know, Tekashi69, 22, is on probation, so his latest arrest may result in him doing some serious time behind bars. NBC News reports that his arraignment is scheduled for the afternoon of Monday, Nov. 19.

As TMZ previously reported in late October 2018, Tekashi69, who found fame in 2017 with his song “Gummo” (via NBC 7), received four years of probation after pleading guilty to one count of Use of a Child in a Sexual Performance in 2015. He was reportedly ordered to “avoid all gang activity” as part of his probation. At the time, TMZ noted that any arrests made during his probation could send him to prison.

On Wednesday, Nov. 14, 2018, Tekashi69 pleaded guilty to disorderly conduct regarding a May 2018 case, in which he reportedly assaulted a police officer during his arrest for driving with a suspended license by squeezing his hand hard. After he pleaded guilty, prosecutors reportedly dropped the misdemeanor assault charge against him.