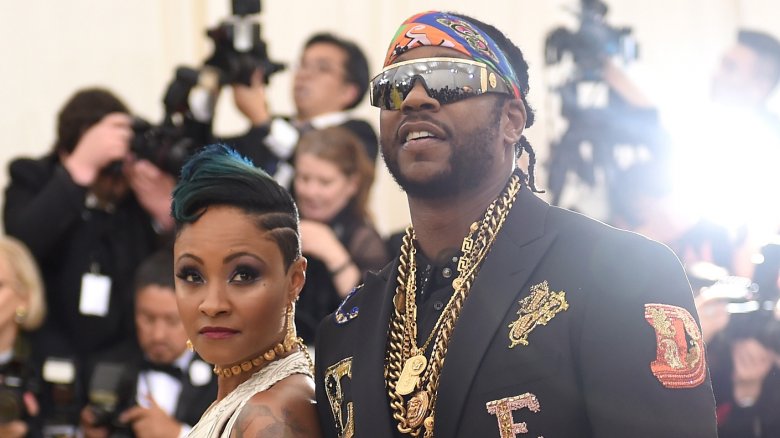 Rap star 2 Chainz, whose real name is Tauheed Epps, tied the knot with his girlfriend and mother of his children, Kesha Ward.

E! News reports that 2 Chainz and Ward married at the Villa Casa Casuarina — a former residence of the late fashion designer Gianni Versace — on Saturday, Aug. 18, 2018. While 2 Chainz donned a tuxedo for his wedding day, his lady love wore a strapless, mermaid-style wedding dress for her walk down the aisle to singer John Legend’s romantic hit “All of Me.”

The couple, however, later changed into other outfits. The rapper swapped his tux out for a white Louis Vuitton suit, and Ward exchanged her gorgeous gown for a party-ready embellished number. According to People, 2 Chainz wore a gold blazer and Ward rocked a bold red gown at their reception, where they were reportedly introduced as “the handsome, debonair Tauheed and his gorgeous diva of a wife, Kesha.”

Among guests at 2 Chainz and Ward’s wedding were rappers Lil Wayne, Gucci Mane, Swizz Beatz, and Kanye West, along with Beatz’s wife, singer Alicia Keys, and West’s wife, Keeping Up With the Kardashians star Kim Kardashian. Kardashian, who wore a stunning, body-hugging neon green gown to the wedding, took to Instagram to share a few photos and videos from 2 Chainz and Ward’s big day on her Instagram Story. In one picture, she and West pose alongside the newlyweds. In another, her husband laughs with Lil Wayne. “Congrats!!!” she wrote on another post.

As fans may remember, 2 Chainz and Ward, who share daughters Heaven and Harmony and son Halo, got engaged while on the red carpet for the 2018 Met Gala. 2 Chainz had also previously asked Ward to marry him years earlier at the 2013 BET Awards, but the two reportedly never made that engagement official.

Congratulations to 2 Chainz and Ward on their marriage!