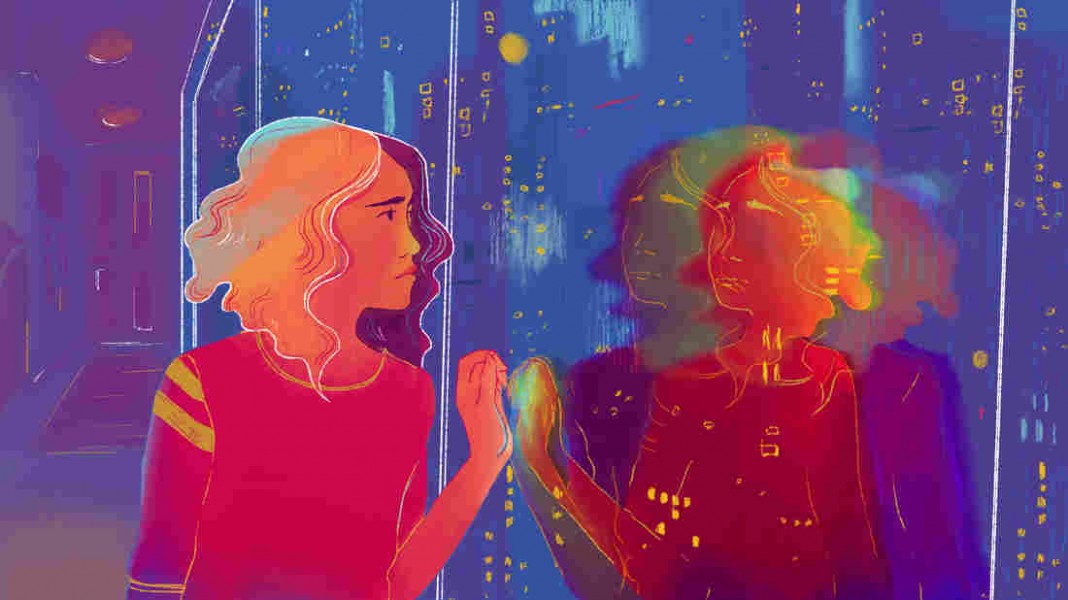 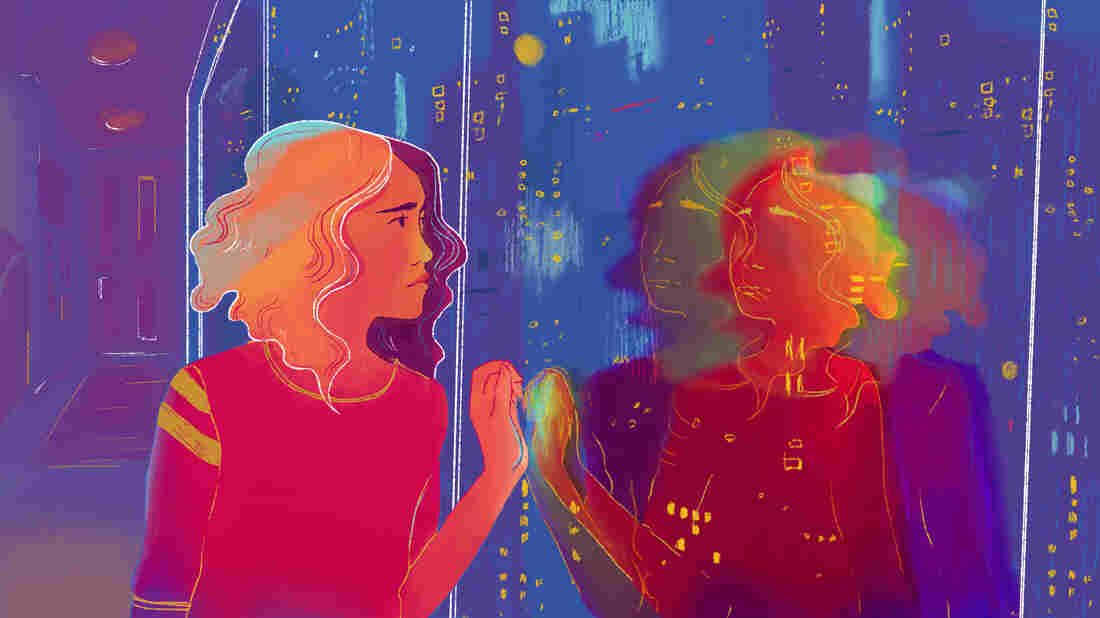 “Racial impostor syndrome” is definitely a thing for many people. Shereen and Gene hear from biracial and multi-ethnic listeners who connect with feeling “fake” or inauthentic in some part of their racial or ethnic heritage. Kristen Uroda for NPR hide caption

“Racial impostor syndrome” is definitely a thing for many people. Shereen and Gene hear from biracial and multi-ethnic listeners who connect with feeling “fake” or inauthentic in some part of their racial or ethnic heritage.

It’s tricky to nail down exactly what makes someone feel like a “racial impostor.” For one Code Switch follower, it’s the feeling she gets from whipping out “broken but strangely colloquial Arabic” in front of other Middle Easterners.

For another — a white-passing, Native American woman — it’s being treated like “just another tourist” when she shows up at powwows. And one woman described watching her white, black and Korean-American toddler bump along to the new Kendrick and wondering, “Is this allowed?”

In this week’s podcast, we go deep into what we’re calling Racial Impostor Syndrome — the feeling, the science and the giant festival this weekend that’s, in some ways, all about this.

Here’s how we got started down this track. A couple months ago, listener Kristina Ogilvie wrote in to tell us that “living at the intersection of different identities and cultures” was like “stumbling around in a forest in the dark.”

She asked, “Do you hear from other listeners who feel like fakes?”

Good question. So we took it to our audience, and what we heard back was a resounding yes.

We got 127 emails from people who are stumbling through that dark, racially ambiguous forest. (And yes, we read every single one.)

Here are excerpts drawn from a few of the many letters that made us laugh, cry and argue — and that guided this week’s episode.

“My mother is a Panamanian immigrant and my father is a white guy from Pennsylvania. I’ve always felt liminal, like I drift between race and culture. When I was young (20s) and living in the city, I would get asked multiple times a day where I was from, where my people were from, because Allentown, Pennsylvania, clearly wasn’t the answer they were looking for … It always felt like the undercurrent of that question was, ‘You aren’t white, but you aren’t black. What are you?’

“But truthfully, I don’t feel like I fit with Latinas either. My Spanish is atrocious and I grew up in rural PA. Even my cousin said a few weeks ago, ‘Well, you aren’t really Spanish, because your dad is white.’ Which gutted me, truly. I identify as Latina. I identify with my mother’s culture and country as well as American culture. In shops, I’m treated like every other Latina, followed around, then ignored at the counter. I married a white guy and had children who are blonde and blue eyed, and I’m frequently asked if I’m the nanny or babysitter. And white acquaintances often say, ‘You are white. You act white.’ And I saltily retort, ‘Why? Because I’m not doing your lawn, or taking care of your kids? You need to broaden your idea of what Latina means.'”

Jen Boggs of Hawaii says she often feels like a racial impostor, but isn’t quite sure which race she’s faking:

“I was born in the Philippines and moved to Hawaii when I was three. … I grew up thinking that I was half-Filipina and half-white, under the impression that my mom’s first husband was my biological father. I embraced this ‘hapa-haole’ identity (as they say in Hawaii), and loved my ethnic ambiguity. My mom wanted me to speak perfect English, so never spoke anything but to me. After she divorced her first husband and re-married my stepdad from Michigan, my whiteness became cemented.

“Except. As it turns out, my biological father was a Filipino man whom I’ve never met. I didn’t find out until I tried to apply for a passport in my late twenties and the truth came out. So, at age 28 I learned that I was not half white but all Filipina. …

“This new knowledge was a huge blow to my identity and, admittedly, to my self esteem. ‘But I’m white,’ I remember thinking. ‘I’m so so white.’ After much therapy, I’m happy and comfortable in my brown skin, though I’m still working out how others perceive me as this Other, Asian person.”

Indigo Goodson’s mom is Jamaican and her dad is African-American. She wrote about the way peoples’ perceptions of her change based on where she lives:

“Culturally we grew up as Jamaican as two California-born black American children could have in the Bay Area. … We ate mostly Jamaican food (prepared by both our mother and father), our Jamaican family lived with us growing up, and it was my mother that told us Anansi stories and other tales or sayings popular in Jamaica.

” … Both my parents are black, so no one ever asked ‘What are you?’ … But then when folks would meet my mum they would say things like, ‘Oh I thought you were black!’ or ‘You do look Jamaican!’ And I would tell people I’m still black and clearly Jamaicans look like black Americans because we are both the descendants of enslaved West Africans. Now that I live in New York City, where if you’re black people assume you are first generation Caribbean, I often have to remind people that my dad is black American and so am I.”

Helen Seely is originally from California. She told us what it’s like for her to interact with different groups as a light-skinned biracial woman:

“White people like to believe I’m Caucasian like them; I think it makes their life less complicated. But I don’t identify as 100% white, so there always comes a time in the conversation or relationship where I need to ‘out’ myself and tell them that I’m biracial.

“It’s a vulnerable experience, but it becomes even harder when I’m with black Americans. It may sound strange — and there are so many layers to this that are hard to unpack — but I think what it comes down to is: they have more of a claim to ‘blackness’ than I ever will and therefore have the power to tell me I don’t belong, I’m not enough, that I should stay on the white side of the identity line.

Natalia Romero echoes some of those feelings. Her family left Colombia for the U.S. when she was 9 years old, and she says that, while she doesn’t consider herself white, as a light-skinned woman who speaks unaccented English, she gets treated like she’s white all the time:

“My mother doesn’t speak English and so when I am home all we speak is Spanish and act like a bunch of rowdy, tight knit Colombians … I grew up experiencing what many poor young immigrants face — bad schools, hunger, poverty, a lack of resources — but eventually managed to pay my way through college and work now as a musician and teacher, often very white communities.

” … When people talk about the current political climate, they speak to me as if I were white, not someone who is terrified of the hatred of Latinx and Hispanic people, someone who walks around with my green card in my wallet, knowing that until I am a citizen (which I morally have a huge problem with) I am not safe. I exist and inhabit these white spaces, but my experience is not white. My experiences comes from being the sole English speaker in my house at age 9 and having to speak for my parents at the bank, at school, in apartments. My experience is from pretending my youngest sister wasn’t part of our family because the apartment complex only allowed 4 people to a 1 bedroom apartment and we couldn’t afford a 2 bedroom one. I come from a place where people speak poorly of Latinx people around me not realizing I am one … “

Everyone’s story is different, and as Shereen and Gene discuss on the podcast, we’re still learning how to talk about identities that fall outside of our traditional understandings of race in the United States. Luckily, for those who are confused, you’re in good company.