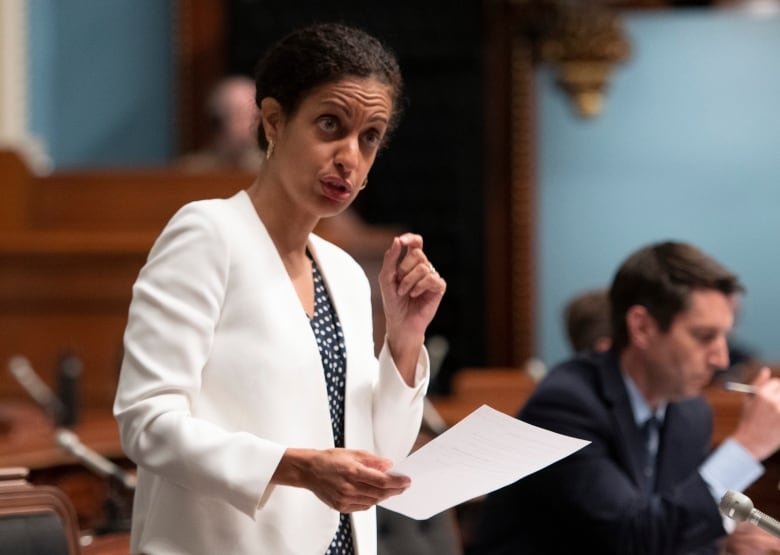 The Quebec government has accused the University of Ottawa of violating a professor’s freedom of expression when it suspended her for using the N-word in class.

“In places like universities you have to be able to have a debate about everything,” Legault told reporters.

“The professor didn’t insult anybody. She just wanted to raise an important subject.”

He added in French: “It’s like we have some kind of censorship police.”

His comments came after Deputy Premier Geneviève Guilbault waded into the debate earlier Tuesday with a post on Facebook that carried a similar message.

“Universities must be places of freedom,” she wrote. “As everywhere, if racist remarks are made, the person must be punished. But censorship and violent attacks on social media are surely not part of the solution.”

The controversy at the University of Ottawa, attended by many francophone students, has become a hot topic in Quebec.

Many TV and newspaper pundits, the vast majority of them white, have come to the defence of the professor in recent days.

Around 600 college and university professors signed an open letter earlier this week, decrying what they saw as an attack on academic freedom.

Dominique Anglade, the leader of the opposition Quebec Liberals, who is Black, also voiced her support for the professor.

Anglade said universities have to be “an environment where people can talk about a word” and “explain the history behind it.”

But she also expressed support for those who say they are subject to systemic racism — something the CAQ government has denied exists in Quebec.

“At the same time, I do understand the reaction of people saying there has been systemic racism, there are issues and people need to be sensitized to that. And they want to have safe spaces where they can have those conversations. I totally support that,” Anglade said.

Verushka Lieutenant-Duval, who is from Montreal and teaches history and theory of art, was suspended Sept. 23 after a student complained she had said the N-word, in English, during a class. The teacher used it as an example of a word that a community has reclaimed.

Lieutenant-Duval did not return requests for comment from CBC News.

But in an interview with La Presse, she said she is aware of the word’s history, didn’t mean to offend her students and prides herself on teaching from an inclusive, feminist perspective.

In response to Lieutenant-Duval’s suspension, 34 professors in multiple departments signed a letter of support in French for her last Friday, when she returned to teaching. The letter said the use of the term can offer educational value, and that a classroom is a place for debate.

Students have come out against the letter from Lieutenant-Duval’s colleagues. The student union described it as “appalling.”

Groups of law and medical students have also called on the school to develop a zero-tolerance policy on the use of the N-word.

“I cannot even fathom what academic freedom is because I’m here trying to tell you using the N-word is already alienating me and not giving me a freedom to exist in these spaces,” said Hannan Mohamud, one of the students who signed the letter from law students.

“Personally, as a Black student, I already feel isolated.”

Celina Caesar-Chavannes, a former MP, was set to give an online lecture Monday about her experience as a Black woman in politics at the school. She cancelled the event in support of the students.

“Students have always been at the forefront of activism,” Caesar-Chavannes said in a widely shared Twitter video.

“I think if we don’t stand with our students at this point, and tell them that we support them when it comes to something like saying the N-word in this context, when we are having very broad conversations about racial inequality, then what are we actually doing?”

Emilie Nicolas, a Montreal-based political commentator and human rights activist, said she worries the debate in Quebec has become so heavily mediatized that the concerns of students have been lost.

She said ambiguity about the French version of the N-word further complicates the discussion, even though it was used in English in the classroom.

“One thing I can tell you for sure is that it’s absolutely used as a weapon,” she told CBC’s Breakaway.

The University of Ottawa released a statement Monday saying Lieutenant-Duval apologized for using the term in class and invited students to discuss its use. The school also offered students an opportunity to continue the class with a different instructor.