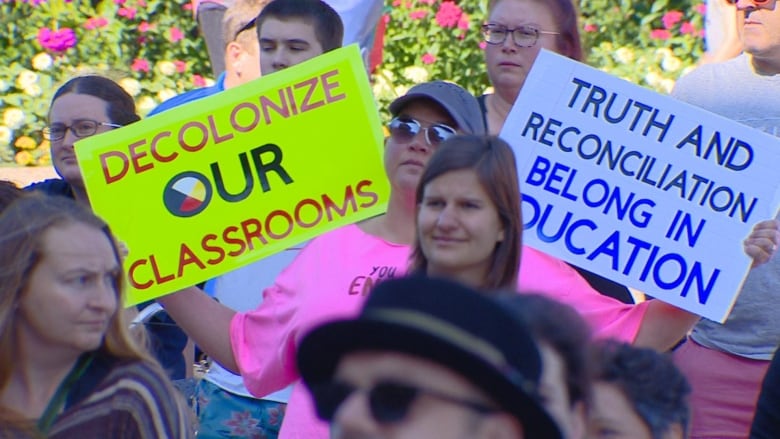 Curriculum advisers hand-picked by the Alberta government are recommending changes to the kindergarten-to-Grade 4 curriculum for fine arts and social studies that would eliminate all references to residential schools and “equity.”

The advisers also recommend that seven- and eight-year-olds learn about feudalism, Chinese dynasties and Homer’s Odyssey in social studies classes.

The drafts, obtained by CBC News, include lengthy lists of names, landmarks and events for young children to memorize.

They say five- and six-year-olds in Grade 1 should be familiar with the artwork of Claude Monet, Georgia O’Keefe, Pablo Picasso and Edgar Degas.

Curriculum experts familiar with the province’s process say the suggestions are a huge departure from where work was heading before the United Conservative Party was elected in 2019.

Some education experts also say the proposed changes are regressive, racist, unsupported by research and would put Alberta’s school curriculum vastly out of step with most of North America.

“I would say it would be a laughingstock,” said Prof. Keith Barton, a specialist in social studies curriculum and instruction at Indiana University in Bloomington.

Dwayne Donald, an associate professor of education at the University of Alberta, is an expert in Indigenous teaching and curriculum.

He said he felt hopeful about the potential for the previously proposed elementary curriculum to better include Indigenous perspectives. The suggested changes erase all of that work, he said.

“It makes me feel sick, actually, that we’re at this point,” said Donald, a member of the Papaschase Cree Nation.

Colin Aitchison, press secretary to Education Minister Adriana LaGrange, said the documents only represent advice to the minister, and are not final. He also said curriculum writers are not obliged to include the advisers’ recommendations.

He said the proposals will go before hundreds of teachers and experts who serve on curriculum working groups for feedback later this fall before the minister signs off on the curriculum.

Promise of curriculum ‘without political bias’

In 2016, the former NDP government announced curriculum writers would modernize the K-12 curriculum in every subject at once, simultaneously in English and French — a first for Alberta.

In opposition, conservatives accused the NDP of smuggling political ideology into the curriculum and claimed it was being written in secret.

Once elected in 2019, the UCP government paused the process and appointed a new panel of advisers to review the work already done.

In August, Education Minister Adriana LaGrange announced a new provincial direction for education based on the panel’s advice. She pledged to deliver a social studies curriculum “taught without political bias” that offered an “objective understanding of Albertan, Canadian and world history and civic literacy.”

She said lessons would focus on “core knowledge” — a theory that all students should learn the same set of foundational information.

Elementary school curriculum should be ready for classroom testing by next fall, she said, and be in all schools by fall 2022.

She also appointed eight “subject matter experts” to give advice. All were men. The social studies adviser is Chris (C.P.) Champion, a history writer and former staffer for Premier Jason Kenney when he was an MP in Ottawa.

Champion has written that including First Nation perspectives in school is a “fad,” which prompted critics to call for his resignation.

Lack of clarity on advisers

Aitchison would not say how many people, or who the other advisers were.

Advice for changes to the K-4 fine arts curriculum and K-2 music curriculum was signed by adviser William French, a board member of the Shakespeare Company in Calgary. He has also worked as a lawyer and a translator.

Neither Champion nor French responded to CBC inquiries about this story.

After facing public criticism about the all-male slate, the government brought on nine more advisers for September and October, including four Indigenous elders and seven women.

Pat McCormack, professor emeritus of Native Studies at the University of Alberta, was contracted to provide advice on Indigenous teachings. When contacted by CBC last week, she had not seen any drafts of the curriculum. The other Indigenous advisers did not respond to messages.

Michael Zwaagstra, a Manitoba high school teacher and author who favours traditional education approaches, said he likes the direction Alberta is heading with the proposed changes. He subscribes to the “core knowledge” theory that children need to accumulate a roster of facts before they can comprehend how systems work.

“Getting more knowledge in your head isn’t about making it easier to test, that’s not the point at all,” he said.

“The point is … ensuring students have enough common knowledge so that they are able to engage with the world around them [and] understand some of the basics of our country.”

Amy von Heyking, a University of Lethbridge education professor who served on the UCP-appointed curriculum panel last year, said the curriculum proposals are out of step with the panel’s recommendations.

“The expectation that students memorize lists of facts is contrary to everything we know about meaningful learning,” she said in an email.

She said the social studies suggestions are “untenable,” and she hopes the government brings all proposals back before the hundreds of experts in the curriculum working groups.

“To take programs in such a radically different direction would be incredibly disappointing,” she wrote.

University of Alberta education Prof. Carla Peck, an expert in social studies curricula, said the proposals would put Alberta so far behind other provinces “it would be embarrassing.”

She called it a century-old, “factory line” approach that assumes every child is the same and that their interests don’t matter.

The “core knowledge” theory has also been widely discredited by academics, she said.

Several experts said the proposed arts and social studies changes turn their back on Alberta’s commitment to the calls to action from the Truth and Reconciliation Commission, which say students must learn about the treaties and the harms of residential schools in all grades.

The social studies draft authors propose residential schools be taught in later grades, alongside other examples of “harsh schooling.”

The authors say residential schools are “too sad” for young children to cover, while at the same time proposing they learn about children in ancient Rome and woman living as enslaved persons and hear of Julius Caesar’s assassination.

Melissa Purcell, executive staff officer of professional development for Indigenous education at the Alberta Teachers’ Association, said the documents removed any allowances for students to hear history from Indigenous perspectives.

It replaced them with token representations that make it sound as if Indigenous people only existed in the past, she said.

“This document is perpetuating systemic racism through whitewashing of the draft K-4 social studies and arts education curriculum,” said Purcell, who is Dene and a member of the Smith’s Landing First Nation.

She said there is also a mismatch between the proposals and provincial teaching quality standards adopted last year, which require all Alberta teachers to be competent in teaching about treaties and residential schools.

FIND OUT MORE: Don’t know the history of the curriculum review process and its controversies? Read more here: