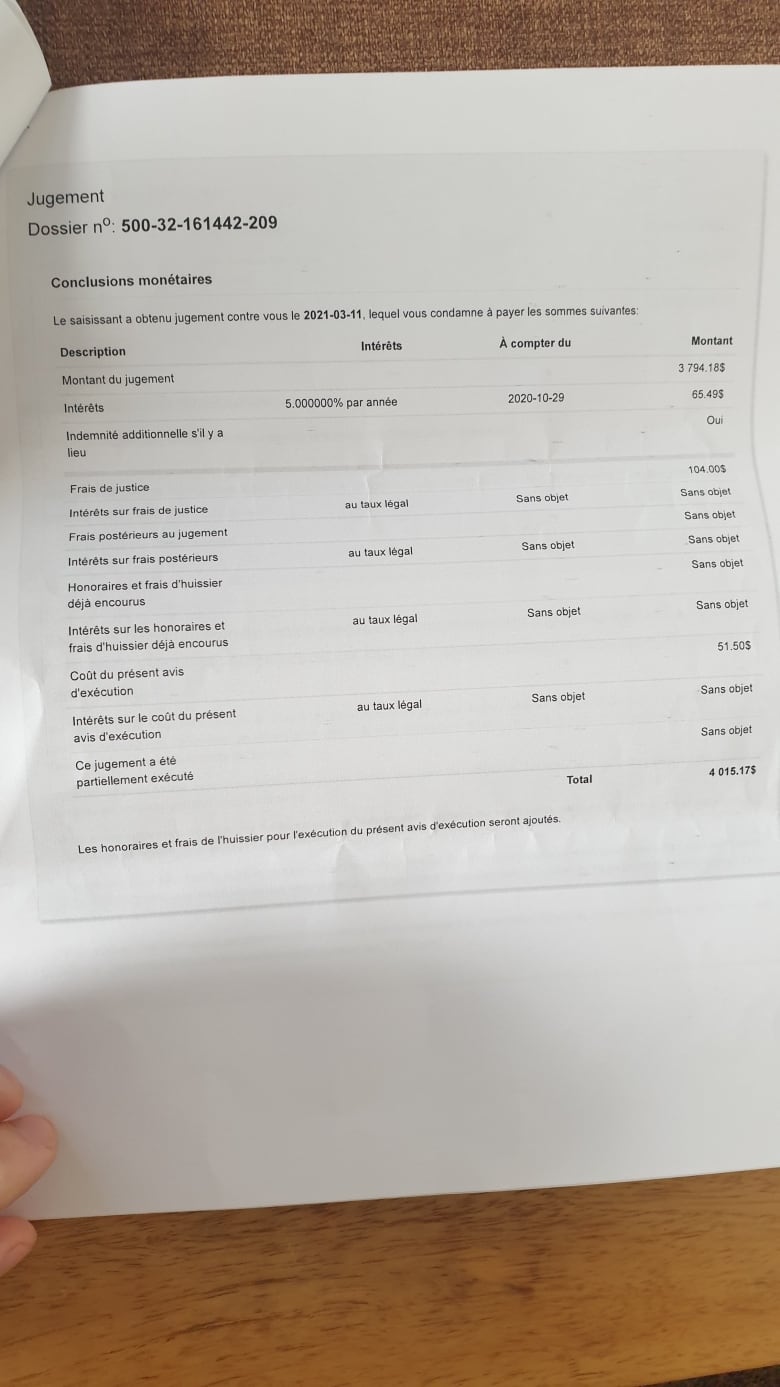 In July 2021, Quebec City resident Jonathan Laferriere was working at home when he got a call from a bailiff.

She wanted to know how Laferriere would be paying the $4,015.17 he owed after a judgment against him in small claims court.

“My initial reaction was that this was a scam,” he told CBC in an interview last week.

“I had never been sued, and I’d never been to court, but as I was speaking to her, the details she was giving me were making it sound quite alarming,” he said.

It was not a scam.

Laferriere learned the lawsuit was tied to a Montreal condominium he’d sold in 2018. A year later, the new owner discovered a mice problem, and sued Laferriere in small claims court, alleging the presence of vermin was a hidden defect, known in French as a vice caché.

But Laferriere was never informed he was being sued.

“The buyer failed to get ahold of me, and the courthouse had sent the notice of the lawsuit to an address that I never lived at,” Laferriere said.

The court case went ahead without Laferriere ever being informed it was happening. The judge ruled in the buyer’s favour in October 2020. In March 2021, the court authorized a bailiff to collect the money.

Laferriere was now on the hook for $4,000, without ever having had the chance to defend himself.

This was just the beginning of what Laferriere calls a “Kafkaesque horror story,” in which he did everything right, yet still ended up owing money because of mistakes made by the court.

“I thought the courts were something that you can rely on, but I’ve just kind of completely lost trust in the system,” Laferriere said.

“It feels like I’m just so small. I feel very unimportant, like I’m at the mercy of this giant bureaucratic machine who just kind of runs on its own,” he said.

Small claims court exists to resolve minor monetary disputes, whose deemed value is $15,000 or less in Quebec, without involving lawyers. It’s supposed to be efficient and simple. But if something goes wrong, people are left on their own to figure it out.

At first, Laferriere felt up to the task.

After hearing from the bailiff, he went to the courthouse in Quebec City and explained how he’d never been contacted about the lawsuit. He was told he could pay $300 to apply to have the decision retracted.

That’s when a decision is suspended and there’s essentially a do-over. Laferriere believed if he was able to have his day in court, he might be able to get the amount he owed reduced or perhaps even wiped out.

He paid the $300 and was granted the retraction. A new trial was ordered.

But there were more bumps in the road.

Laferriere received a letter from the court asking him to prepare any documents he might want to use as evidence and send them to the courthouse in Montreal where the trial would be held. But before he could do that, he needed to see the evidence the buyer had submitted against him.

“Because at this point, bear in mind, I still don’t know exactly why I’m being sued. I have no details,” Laferriere said. The letter said he would be contacted soon. Weeks went by and nothing came.

He called the courthouse again, and was told that he had to send an email, formally requesting the buyer’s evidence.  There was also a $200 fee.

“I feel like that’s the kind of information that would have been great to have in the letter, but I digress,” he said.

He paid the fee, received the buyer’s documents, built his case and submitted his proof to the court.

Apparently, there had been a 15-day deadline for him to submit his proof, and that deadline had long passed. There was no mention of the deadline in any of the correspondence he’d received from the court.

He phoned the courthouse again, and they explained he hadn’t been sent the correct forms. He was told to take all his evidence, put in an envelope along with a handwritten note explaining the situation to the judge and send it to the courthouse in Montreal.

He did that, and it worked. A new trial date was set for last December.

Laferriere and the buyer both presented their arguments to the judge. In the end, he was still ordered to pay the buyer, but it was much less than the initial amount. Instead of $4,000, he was ordered to pay $1,500: a partial victory.

“I was ready to just put all this behind me. I put the cheque in the mail to the woman who sued me. I gave her the money. It gets delivered. It gets cashed. And I think this is the end,” Laferriere said.

“Finally, thank God, I can move on with my life,” he said.

Earlier this year, Laferriere got a letter from his employer telling him that they had been contacted by a bailiff, and they would be deducting money from his pay cheque, to pay back the $4,000 that he owed. (Bailiffs appointed by the court have the power to garnish people’s wages, to collect on debts.)

Laferriere called the bailiff again, and the bailiff realized a mistake had been made and said his employer would be contacted, and the situation corrected.

Then the bailiff called Laferriere back earlier this month and said that he still owed $1,020. Laferriere was confused, because the case had been settled, and he’d already paid back the buyer who sued him.

The bailiff told him that the $1,020 included interest and administrative fees charged on the amount of the original judgment of $4,015.17 — the original amount levied against him, which Laferriere had already paid to have retracted.

Laferriere asked the bailiff why he should have to pay interest on a decision that was no longer valid.

“They said, ‘This is just how the system works,'” Laferriere said.

He called the courthouse to confirm if this was true and was told the same thing.

“They just kind of shrug and say, ‘What are you going to do?'” he said.

Laferriere said he was told he could pay $300 again and try for another retraction, or challenge the fine in court.

“I’m not going to take on the legal system. If you see the price of gas, I can’t afford a lawyer right now,” he said.

Laferriere may have one card left to play.

Annie-Claude Bergeron, a spokesperson for the Court of Quebec, which has jurisdiction over small claims courts in the province, told CBC the court couldn’t comment on a specific case.

But Bergeron referred CBC to article 566 of the Quebec Civil Code.

“This article gives to a debtor who wishes to contest the amount being claimed the possibility to file an incidental application on a form that can be obtained from the court clerk,” Bergeron said.

Laferriere said neither the bailiff nor the courthouse ever mentioned this option, but that he may consider it.

“Part of me wants to so bad because I just feel like I shouldn’t let this die,” he said,

“But at the same time, it’s just such a hassle.”

“I don’t really want to go through all this again.”