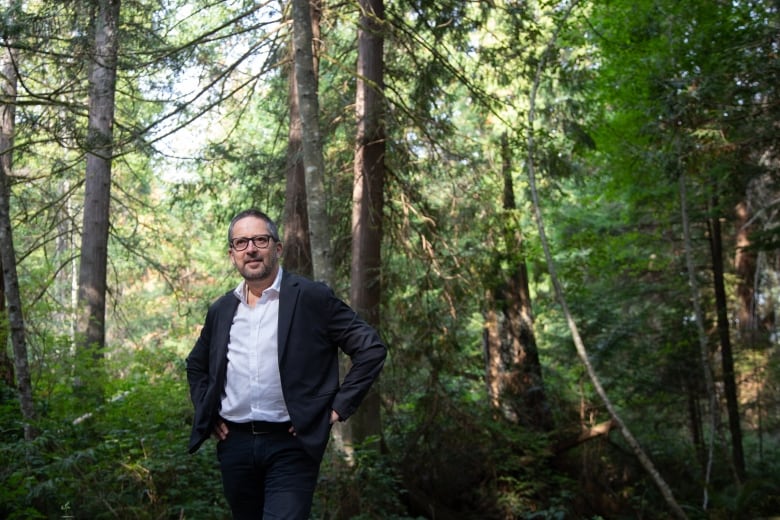 What On Earth53:50Putting a price on nature

How a small town is saving millions on climate adaptation by embracing nature’s services. Climate action as a public health solution. And can throwing soup at art lead to policy change?

On a sunny day in early October, Ryan Belanger, his wife, a couple of their kids and their dog were out enjoying White Tower Park, just a few blocks from where they live in Gibsons, B.C.

“It doesn’t matter the weather, really. This is where we come for our nature walks,” he said.

Sandy Brown was also out that day. She walks her dog in the park every day, and values the daily dose of the outdoors.

“It is such an asset to get out here in and among the trees and the bushes — you can barely hear the town,” Brown said.

People in Gibsons make good use of the forest, and in recent years, the town started rethinking how it treats this kind of asset, in the hopes of improving the community’s climate adaptation.

White Tower Park is not only a lovely place for a stroll, but through its ponds and culverts, it can soak up water, helping protect the town from flooding.

In 2012, Gibsons changed the definition of infrastructure to include “natural assets.” By putting a value on things like wetlands, forests and coastlines, a municipality like Gibsons can make a financial case to invest in, protect and restore these ecosystems while also benefitting from the services they provide.

The town valued the water management services White Tower Park could provide at $3.2 million — which was about the same cost as engineering an equivalent system.

“It’s not about putting a dollar figure on the environment,” said Emanuel Machado, the town’s chief administrative officer. “But the reality is that decisions are made with data, particularly with financial data, and if you want to provide … a business case in this for a natural alternative, then you have to understand the value of that service.”

As communities across Canada face increasingly frequent and severe impacts of climate change, some are turning to nature as a way to help adapt. Gibsons has inspired other municipalities, including a Canada-wide Municipal Natural Asset Initiative, to look to local ecosystems as part of the solution.

Nestled at the base of Mount Elphinstone on the Sunshine Coast, Gibsons is home to fewer than 5,000 people. A 40-minute ferry ride from West Vancouver, the community is perhaps most recognizable to Canadians from the TV series The Beachcombers.

Around 2009, the town started taking stock of the natural features in and around the community. To do so, it re-examined the very definition of infrastructure.

A typical definition of infrastructure, said Machado, is an “engineered and manufactured asset that provides a service,” such as water treatment services, the electrical grid or roads.

The town wanted to take this a step further. In 2014, Gibsons officially passed a municipal natural asset policy that it says was the first of its kind in North America. It expanded the definition of municipal infrastructure.

“A natural asset is a feature in the environment that provides the service,” said Machado.

Located downhill of a mountain and uphill of the waterfront, White Tower Park catches runoff from rain and snowmelt; unlike paved roads, the roots and dirt in the park soak up water and naturally filter it before it’s discharged into a local creek.

By putting a price on the value of the park’s services, the town made a case to invest in upgrades rather than building new infrastructure, such as a system of pipes. The changes were simple — in two areas, the town dug out some dirt beside the trails, creating a series of stormwater ponds, with a third area planned for expansion.

As a result, Gibsons averted $3.5 million in building costs, and continues to avoid $80,000 annually in the estimated maintenance of pipes — money that a small tax base simply doesn’t have, said Machado.

He added that the stormwater ponds excavated in White Tower Park can also hold more water than the engineered pipes would have. The park’s stormwater ponds were full during the atmospheric river in November 2021 that led to severe flooding in some parts of B.C., but Machado says they were still doing their job managing the flow of water.

“We don’t have enough time or money to replace the infrastructure fast enough to deal with the pace of [climate] change,” said Machado. “Our response is quicker, in our opinion, and more effective if we enhance something we already have, rather than build something new.”

Gibsons’s natural asset inventory also includes part of the coastline with sensitive ecosystems and a beach, as well as an aquifer that supplies drinking water.

A growing trend for cities and towns

When Sebastien Doiron read an article about Gibsons and its work on natural assets, he wanted to find out if New Brunswick could learn from this approach.

Now, Pointe-du-Chêne, a popular summer destination on the Northumberland Strait, is part of a coastal pilot project with the Municipal Natural Asset Initiative.

The region is working to “slow down” or stop climate change impacts to the coast, which includes work to protect sand dunes, said Doiron, the director of planning for the Southeast Regional Service Commission in New Brunswick.

Rather than building an “engineered solution” like a sea wall, the region opted for a living shoreline, which uses a combination of soft materials like plants and sand to help the ecosystem and maintain its accessibility to visitors.

The approach has “huge co-benefits, being a tourist community,” said Doiron. 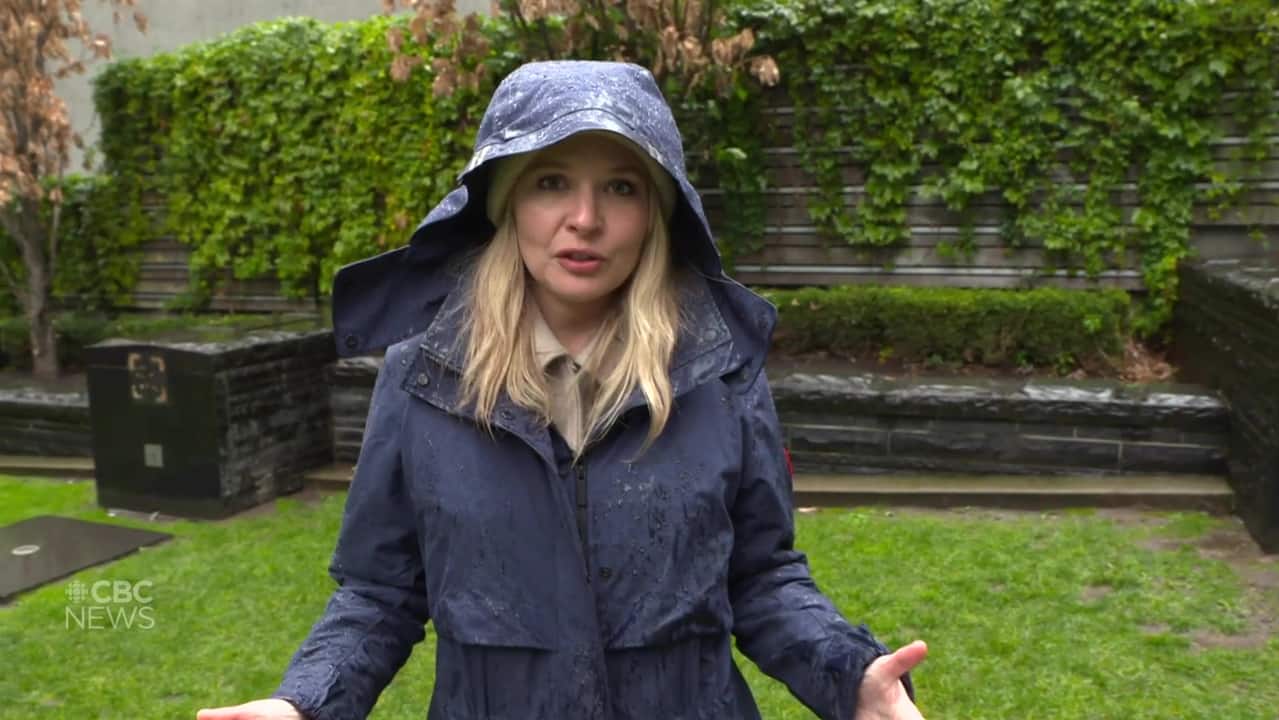 What is an atmospheric river?

It’s a term that became more widely known after record-setting flooding hit B.C. in November 2021, but as meteorologist Johanna Wagstaffe explains, atmospheric rivers are not new to the province.

Sheri Young has been working for several years on a similar approach to valuing nature in the town of Okotoks, Alta. About a 30-minute drive from downtown Calgary, Okotoks is a growing community. As development applications come in, having a natural asset valuation in place maps out where wetlands are, including what value they hold to the community.

By identifying the “high-value wetlands,” the town is now putting its inventory to the test and is in discussions with a developer about how a project could move forward in a way “that preserves that wetland and makes it a part of that unique community” rather than building over it, said Young.

From the cool shade trees provide in a city during a heat wave to wetlands soaking up and filtering water, natural assets are “coming to the forefront as an adaptation measure, not just as a carbon-sequestration, nature-saving … hippy-dippy kind of thing,” said Young.

A forthcoming national adaptation strategy, slated to be released later this year, includes an advisory group dedicated to looking at built and natural infrastructure. In the preliminary report last year, the group proposed a goal of making infrastructure “climate resilient” by 2050, including natural assets.

The limits of putting a price on nature

But the push for municipalities to value ecosystems and invest in them in the name of climate change has its limits.

As an ecologist who has worked on ecosystem restoration projects, Young has reservations about monetizing nature. She says it has value “in its own right.”

It’s an issue that Laren Bill is trying to address as a First Nations advisor for the Winnipeg Metro Region as it embarks on its own work on natural assets.

Bill, a member of the Pelican Lake First Nation on Treaty 6 Territory in Saskatchewan, is working with Jim Bear, former chief of Brokenhead Ojibway Nation.

“When Jim and I were looking at … the term ‘assets,’ we automatically saw that as placing a value on the land,” said Bill. “Mother Earth provides all different types of supports to life and organisms, not just humans.”

In his discussions with First Nations on Treaty 1 Territory in the Winnipeg Metro Region, moose have come up as one example. The First Nations he’s consulting with “would like to see more moose habitat rehabilitated, so that they can again hunt in their traditional territory,” said Bill.

A healthy ecosystem and moose population would allow more youth to get out on the land, which he says is an invaluable experience.

“We’re seeing more and more First Nations wanting to look at landscape, land-based education curriculum and … they see that as a means to connect to the past, but also bring those teachings to the future.”

Bill wants to see municipalities and First Nations working more closely together, as a way to recognize nature has many uses and purposes, depending on your perspective.

Emanuel Machado acknowledges the challenge of natural asset valuation. The town of Gibsons is in touch with the Squamish Nation, whose territory the municipality is built on, and has collaborations in the works.

In fact, the Squamish Nation has a restoration project at the Squamish Estuary that’s been in the works for years.

About an hour north of Vancouver, a spit for a coal port is coming down as part of an ecosystem rehabilitation, a collaboration between the nation, a local watershed society and the District of Squamish, among others.

A report values the services the estuary provides at $12.6 million annually — a number that Wilson Williams, an elected councillor for the Squamish Nation, says can’t capture the cultural value of the place.

Williams said putting a dollar figure on a natural asset helps “subsidize the need for the restoration project to come to fruition.”