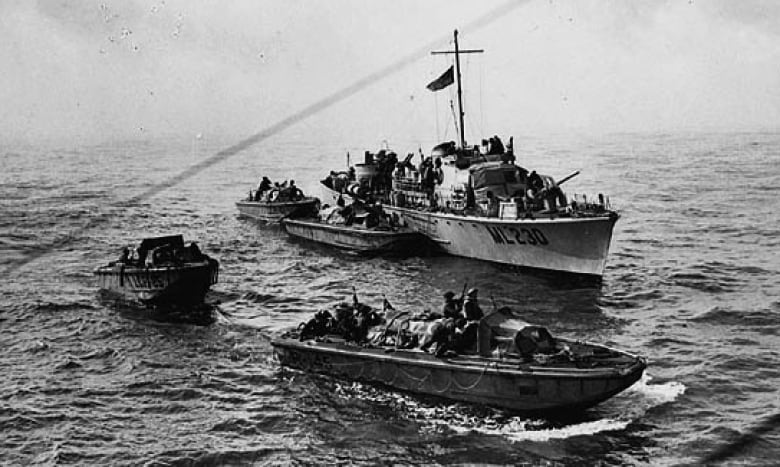 Fernand Labrie may be 100 years old, but his memories from the time around the 1942 Dieppe Raid are as vivid as ever.

He was 20, a soldier in the Canadian Forces’ Régiment de Maisonneuve, aboard a ship carrying TNT, on standby to fight Nazis on the French beach during the critical Second World War operation.

“I’ll be honest with you, I wasn’t afraid. I had a policy: live today, f–k tomorrow. That was our motto. I couldn’t speak English then, but that word I knew,” he said with a laugh.

Labrie’s contributions toward liberating France will be recognized on Nov. 17, when he’s due to to be made a Knight of the French National Order of the Legion of Honour.

The honour can be traced all the way back to Napoleon Bonaparte, later Napoleon I, who created the award in 1802 to reward French citizens for their service, irrespective of social or hereditary considerations.

The ceremony will take place in Labrie’s hometown of Duncan, B.C., and will be led by the Consul General of France in British Columbia, Nicolas Baudouin.

Baudouin said the recognition is timed to mark the 80th anniversary of the Dieppe Raid, which was largely fought by Canadian soldiers.

“It’s very important to recognize those who came from afar, from Canada, to liberate my country during the Second World War, so we never forget those friends and allies,” said Baudouin.

“They did something very courageous, to join the army and fight for values we care about, namely, freedom and liberty.”

Born in Montmorency Falls, Que., Labrie enlisted as an 18-year-old and shipped out to England in 1940, not knowing a word of English.

The Régiment de Maisonneuve didn’t end up fighting at Dieppe, although Labrie did serve through to the end of the Second World War, landing on France’s Juno Beach soon after D-Day in 1944 and fighting through France, Belgium, Germany and Holland.

He re-enlisted after the war and went on to become a career soldier, even surviving a plane crash in 1949. He retired from the Canadian Armed Forces in 1973.

Daughter Pierrette Morgan said her father doesn’t often speak about his wartime experiences, but the Legion of Honour bestowal has opened the door to a few stories the family is hearing for the first time.

“We’re thrilled for my father,” she said. “He’s making very light of the honour but I think a lot of soldiers didn’t feel the importance of what they were doing. They didn’t feel special.”

That remains the case to today, although Labrie will concede he is a tiny bit humbled to receive the Legion of Honour medal.

“It seems pretty impressive. I never expected it. I was just one of the millions, so why me?” he said.

Baudouin said his nation’s efforts to honour veterans like Labrie are particularly meaningful at this moment in history.

“Unfortunately, because of the Russian aggression, war is back in Europe. I think it’s important that everyone recognizes the help we received [during the Second World War] and that those ties that are forged in very difficult times remain strong,” Baudouin said.

To date, France has awarded 1,154 medals to Canadian soldiers, including 232 in B.C.