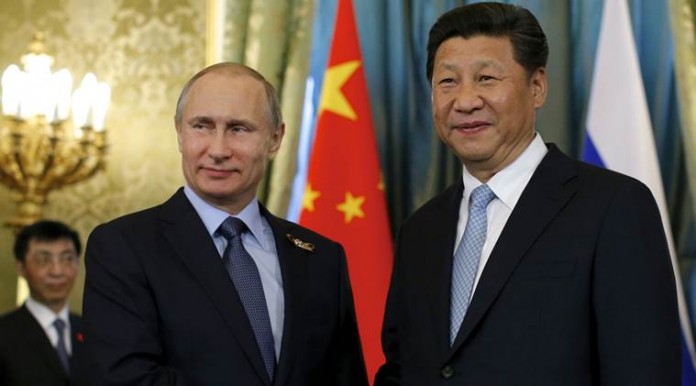 President Vladimir Putin of Russia on Tuesday extolled the values of growing trade with China in a meeting with Chinese counterpart Xi Jinping in Moscow as the eastern great powers reinforced their ties.

“I’m glad to note that while, last year, we saw modest growth in trade, 3.9 per cent, this year it is already significant, 37 per cent in the first four months,” Putin said in comments carried by state news agency TASS.

Putin awarded Xi the Russian government’s most prestigious order, the Order of St Andrew, for his “service in strengthening the friendship and collaboration between the peoples of the Russian Federation and the People’s Republic of China,” the Kremlin said in a statement.

Russia and China have been building economic and diplomatic relations in recent years amid waning ties with the United States, which has opposed Russian and Chinese geopolitical policies.

Trade between Russia and China grew 33 per cent in the first five months of this year to about 32 billion dollars, Chinese state news agency Xinhua reported ahead of Xi’s two-day visit.

The presidents were expected to meet with business leaders to strengthen economic collaboration between the neighbouring countries.