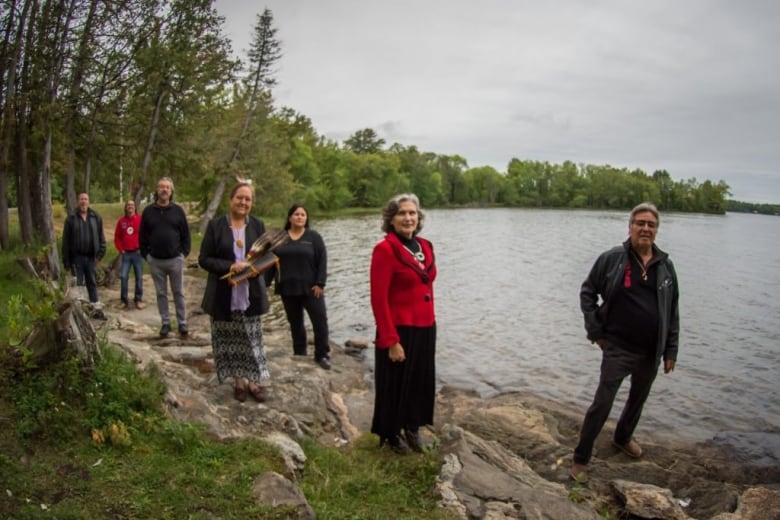 A CBC investigation that cast doubt on the authenticity of a letter which has enabled more than 1,000 people to claim Indigenous ancestry is reinvigorating efforts to remove so-called “pretendians” from the Algonquins of Ontario (AOO) membership list.

The letter had been used at a 2013 hearing to persuade a retired judge that 19th century voyageur Thomas Lagarde was Algonquin, making him a key “root ancestor.”

That meant 1,000 of his descendants could claim they were Algonquin and thus potential beneficiaries of a massive pending land claim agreement involving almost $1 billion and more than 500 kilometres of land between the AOO and the federal and Ontario governments.

“It’s almost, in my mind, a certainty that this is a forgery,” Algonquin professor Veldon Coburn said at the time, having reviewed the results of the investigation.

“The Chief and Council of [Pikwakanagan] have no tolerance for fraudulent actions that impact the negotiation process and beneficiary criteria, and directly affects the integrity of the process,” the First Nation said in a statement emailed to CBC News.

Among those targeted for removal are some so-called Algonquin political leaders and academics “who are fraudulently taking up Indigenous spaces in high academia and procurement opportunities,” the Pikwakanagan chief and council said.

It was Pikwakanagan that had led the charge to remove Lagarde from the root ancestor list in 2013, though the effort failed when the retired judge accepted the authenticity of the controversial letter.

This fall, the First Nation will attempt once again to push Lagarde and his relatives out, when band leadership says it “will be pursuing actions to address the fraudulent activity/representation.”

Pikwakanagan is one of 10 Algonquin communities that make up the AOO. The other nine entities — made up of a mix of status and non-status Indians — are only recognized for the purposes of treaty negotiations.

More than 8,000 people are currently deemed Algonquin and potential beneficiaries of the treaty.

A CBC investigation has cast doubt on the authenticity of a document that has been used by 1,000 people as evidence they are truly Algonquin and rightful beneficiaries of a nearly billion-dollar land claim agreement. 2:53

Ancestry of 2 chiefs rely on Lagarde

For years, Davie Joanisse, chief of Antoine First Nation, in northeastern Ontario, says he and his people have been concerned that too many people are being granted Algonquin membership based on flimsy criteria.

The revelations about the letter could mean hundreds of people will be struck from the AOO membership list, he said.

“If there was something that was done wrong, if there is a document that was played with or tampered with, it’s good that somebody found out about it,” said Joanisse. “I think it only strengthens our claim and it strengthens the validity of the people that are going to be left at the end of the day.”

But Joanisse said he is also concerned because two of the 1,000 people who rely on Thomas Lagarde’s ancestry are chiefs of Algonquin communities.

“We’re concerned because we may have had several people in a leadership role that may have been making some important decisions and they may or may have not been Algonquin,” said Joanisse.

Both Mielke and Clouthier declined to speak with CBC News.

Further, some of those 1,000 people have been relying on Lagarde for their ancestry for decades, said Joanisse, and possibly exercising Indigenous rights in that time. “They’ve been putting extra stress on our resources, our fish populations, our moose and deer populations, which are under stress anyways,” he said.

Joanisse was also quick to point out that the vast majority of people who have been relying on that ancestry have likely been doing so in good faith, without knowing about the questions surrounding the Lagarde letter.

“I don’t think you can blame the individuals that applied under this process,” he said.

Another person who finds herself entangled in this controversy is University of Regina professor Michelle Coupal. She holds the Canada Research Chair in Truth, Reconciliation and Indigenous Literatures and is the former president of the Indigenous Literary Studies Association.

Coupal identifies as an Algonquin/French scholar and is a member-in-good-standing of the Bonnechere Algonquin First Nation (BAFN), one of the 10 Algonquin communities involved in the treaty negotiations.

She also relies on Thomas Lagarde as one of her root ancestors.

Earlier this year, before CBC’s investigation into the questionable letter, she was targeted online for her reliance on Lagarde.

An anonymous Twitter account using the handle “Pretendians for hire” claimed that Coupal was, in fact, a “white woman” and not Algonquin. The account has called out dozens of people it refers to as “pretend Indians,” primarily in the spheres of academia, politics and the arts.

Claims about people falsely assuming Indigenous ancestry have come to national prominence in recent years, and a number of high-profile scandals have prompted calls for increased accountability.

When CBC News asked Coupal about the account’s claim a few months ago, she called it “false and defamatory.”

Following the publication of CBC’s investigation last month, Coupal removed much of her biography from her university profile, including a reference to her being Algonquin.

When asked about the CBC investigation, Coupal said she remains Algonquin and a member of the BAFN but she acknowledged changes may be coming.

“If my Algonquin status changes, and I am deemed to not meet federal and provincial standards, I will adjust how I identify accordingly,” she said.

“Even if all of my ancestors are taken off the list in the fall protests (a situation that is highly unlikely), I will remain a member of BAFN because I have community acceptance.”

Further, Coupal said that her Canada Research Chair position does not hinge on her Indigenous identity.

“No matter what happens, my position at the University of Regina and as a Canada Research Chair will remain unaffected, as the position was open to all to apply,” she said. “I was hired on the strength of my research, not my ethnicity.”