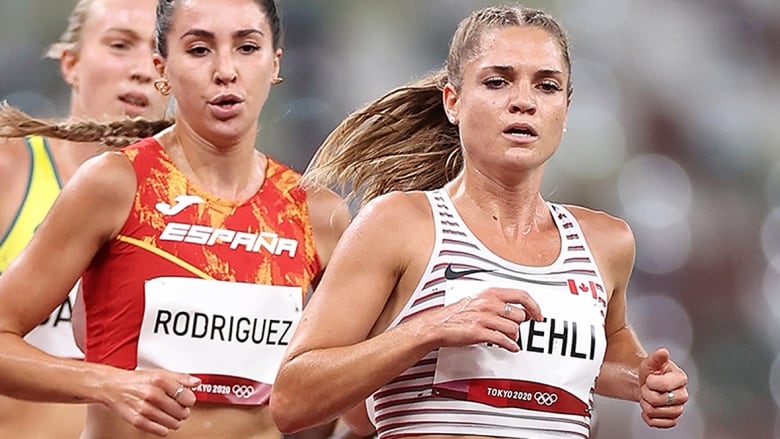 Kate Van Buskirk is ready to race again and fulfil a longtime dream of running the Fifth Avenue Mile on Sunday in New York City.

“This has been on my bucket list for a long time and I am excited for the opportunity [to run] one of the premier road mile races in the world,” she told CBC Sports recently.

The Toronto resident and Julie-Anne Staehli of Lucknow, Ont., are part of the pro women’s field at 12:15 p.m. ET, while Quebec City’s Charles Philibert-Thiboutot is the lone Canadian in the men’s race at 12:30 p.m.

The 40th running of the event, featuring a top international field — including 15 Tokyo Olympians and three medallists — extends 20 blocks along the east side of Central Park in Manhattan.

Since Van Buskirk realized another dream on July 30 of competing at the Olympics — where she placed 14th in her 5,000-metre heat — the 34-year-old has maintained her fitness pacing three women’s races at the distance, including Wednesday’s Diamond League Final in Zurich.

Van Buskirk’s European travel for competition this year – which has taken her from Nice, France to Paris, Norway, Belgium and Switzerland – went smoothly until her Olympic suitcase was stolen during a Aug. 30 train ride from France to Belgium. She arrived in Leuven with only one pair of running shoes and running shorts, a sports bra and no toiletries.

Fortunately, Van Buskirk’s passport, vaccine card, wallet, phone, laptop, Garmin and chargers were at her seat in a backpack.

The producer and host of The Shakeout Podcast didn’t lose interview footage but is minus a studio microphone and interface, along with the corresponding cables and chargers used to record her podcast episodes and interviews.

“I’ve been told luggage thefts and pickpockets are quite common in places like Ghent and Brussels — two of the stations where my train stopped — and recovering stolen items is rare,” said Van Buskirk, who holds the indoor mile record for Canadian women at four minutes 26.92 seconds.

“This theft felt like a violation and loss [as] there were several precious [and] essential items in my luggage I’m scrambling to replace.”

It was an incredible experience to attend my first Olympics. What I will remember far more is all the travel, figuring things out on the fly and pushing myself to entirely new heights in training.— Canadian runner Kate Van Buskirk

Thanks to Van Buskirk’s agent, Ray Flynn, who connected with Nike — the runner signed a sponsorship deal in 2018 with the shoe manufacturing company — she was quickly provided clothing and a pair of Dragonfly spikes to finish her season.

Van Buskirk was also told by the Canadian Olympic Committee it would attempt to replace Team Canada merchandise.

“Tokyo was my first Games and the team gear is deeply sentimental,” she said. “I had bought a few items in the Olympic Village which will be irreplaceable. I also had my HyperIce Normatec compression boots stolen, which are essential, very expensive and part of my regular [race] recovery protocol.

“I hope whoever stole my suitcase needed its items more than I did, and I wish that person well.

“I’m focused on moving forward. This has been a long, strange, difficult and wonderful year,” added Van Buskirk. “It was an incredible experience to attend my first Olympics, but I think what I will remember far more is all the travel, figuring things out on the fly and pushing myself to entirely new heights in training.”

The first Olympian from Lucknow, a small farm town of 1,100 situated 125 kilometres north of London, Ont., placed 32nd in Japan in 15:33.39 a few weeks after graduating from Western University with a teaching degree.

The 30-year-old Philibert-Thiboutot returns to road racing nearly a month after winning the men’s Falmouth Elite Mile in the coastal town on Cape Cod, Mass., where he clocked a personal-best 3:52.97 to set an event record.

At 10:45 a.m. Sunday, runners from the New York City police and fire departments will compete in one of 20 heats to mark the 20th anniversary of their response to the 9/11 terrorist attacks that claimed the lives of nearly 3,000 people.