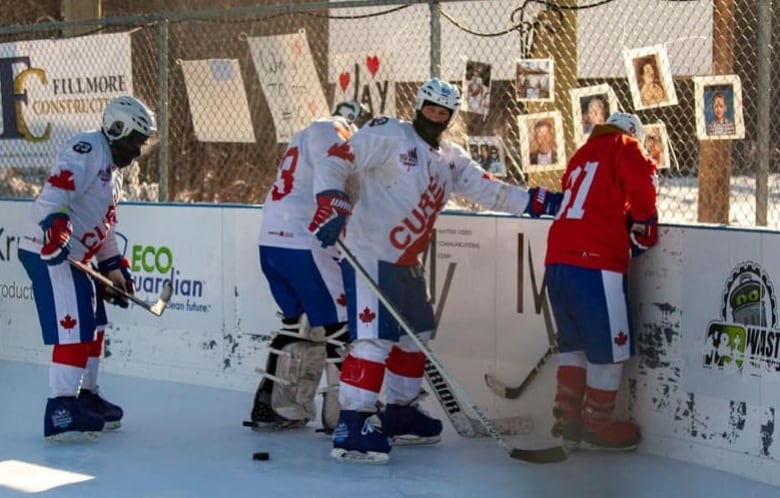 Brent Saik laughs when asked how 40 players competing in a multi-day hockey game, to break the Guinness World Record for the longest game, are handling the bitter cold on an outdoor rink.

“It’s been horrible,” the event’s founder told The Canadian Press. “We didn’t expect to dress for cold … for the entire time.”

Pucks shatter as players pass them along the boards. Skate blades are breaking in half. Pieces of masks are falling off as glue lets go and goalie pads are cracking in the cold.

Temperatures have dropped to between -40 C and -55 C with the wind chill at times this week and, although it’s supposed to warm up slightly on the weekend, the cold snap isn’t expected to lift until Monday.

That’s the same day the game, meant to raise $1.5 million to fund cancer research at the University of Alberta, is to hit its 252-hour goal around 6 a.m. and break its own Guinness World Record.

Saik, an optometrist, started the game in 2003 after losing his father to cancer and decided to keep it going after his wife also died from the disease.

This year’s game — the seventh edition — has already been one for the record books.

Goalie Andrew Buchanan, a firefighter and paramedic in Strathcona County about 30 kilometres east of Edmonton where the game is being played, said: “It’s been out of this world.”

There are challenges on the rink, but it also isn’t easy to warm up off the ice.

Players are living in trailers set up on Saik’s rural property in an NHL-style bubble, after receiving a special exemption from the province to play during COVID-19 restrictions.

Buchanan said furnaces in the trailers can’t keep up with the cold.

“We’re out on the ice playing for six, eight, 10 hours at a time and then you just want to get some warm sleep … That’s not the case when it’s -54 C with the wind chill.

Buchanan dresses in four base layers, battery-powered socks, two pairs of gloves with hand warmers and a full balaclava.

“It’s a constant emotional roller-coaster. What’s so amazing, as soon as you’re down, you have another person picking you right back up.

“Every player brings pictures of how cancer has affected us and we line up those people in the dressing room, so you just look around and see who you’re playing for.”

Fans aren’t allowed to watch in person this year, but they can drive past the rink to honk or wave.

Buchanan said those visits have been great motivation especially when energy is waning.

“All of a sudden a fan will pull up, put up a picture of their loved one who is either battling cancer, or has unfortunately passed away from cancer. It just motivates you and picks the energy up again, and you keep going.”

Saik agreed there’s been lots of motivation to keep playing.

“This has been by far the hardest game that I’ve ever done. But it’s working and we’re going to raise the money that’s needed, so we’re in good shape.

Hear how two first timersare dealing with freezing cold temperatures, on top of playing hockey for days on end, and quarantined in campers when they aren’t on the ice. 8:46