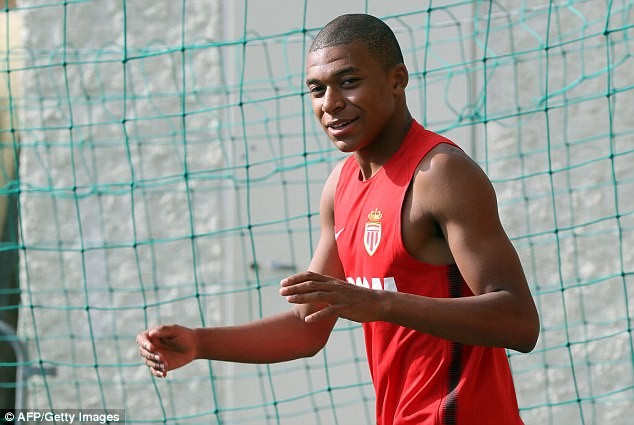 Paris St-Germain have signed Kylian Mbappe on a season-long loan from Monaco, with an option to make the deal permanent for a fee of £165.7m.

Should PSG sign the France international on a permanent deal, his contract will run until June 2022.

“I really wanted to be a part of the club’s project, which is one of the most ambitious in Europe,” said Mbappe.

The delay in signing Mbappe permanently is reported to be so PSG can comply with Uefa’s Financial Fair Play rules.

Nasser Al-Khelaifi, president of PSG, added: “It was essential for French football that we keep and help develop such a great talent in our championship.

“Among players of his age, he is without doubt the most promising in the world due to his immense technical, physical and mental qualities.

“Since his emergence at the highest level, he has earned an excellent reputation as a young talent who is very respectful, open, ambitious and already very mature.”

Why a loan deal?

The wording in the PSG announcement is key, they can’t officially say that it’s a loan which will become a permanent deal because if they did then the transfer fee would go on this year’s accounts (and give them a big Financial Fair Play problem).

So they’ve basically said there is an “option” on bringing him in permanently, but they won’t say “the loan will become permanent” because if they did then they’d be in FFP bother.

I suspect it may yet come under Uefa scrutiny.

Real Madrid, Liverpool, Manchester City and Arsenal had all been linked with the France international this summer.

Last month, Monaco said “important European clubs” had made illegal approaches for the striker, although they did not name the sides concerned.

Mbappe was substituted in the opening game of the Ligue 1 campaign against Toulouse, and has not appeared in the subsequent three matches – being left out entirely for one and kept on the bench for the other two.

What they say about Mbappe

“Mbappe has no price. He is like a son.” – Monaco vice-president Vadim Vasilyev.

“I don’t like comparing players – Mbappe has to become Mbappe and that is all. But my word, he is good. Ooh la la. l really like watching him play.” – former Arsenal, Monaco and France forward Thierry Henry.

“We studied Mbappe, he is a devastating player. I’ve met some over the years, but at his age with that technique, physical strength, pace and, above all, his movements, because he changes things up and makes excellent movements off the ball, I’ve not seen someone like him.” – Italy and Juventus defender Andrea Barzagli.

One of the strongest XIs in the world?

PSG now have an embarrassment of riches but how do they fit Edinson Cavani, Neymar and Kylian Mbappe into one team?

They started the season with a 4-3-3, so the simplest and most likely solution would be to drop Angel Di Maria and replace him on the right of a three with Mbappe. The difficulty with that is both Neymar and Mbappe prefer cutting in from the left, but surely the trio are talented enough to interchange during games?

Another option would be 4-4-2 – a shape in which Mbappe thrived at Monaco – but surely there’s no way Unai Emery can leave out Cavani, who scored 35 goals in 36 Ligue 1 games last season and has already hit the ground running during this campaign?

French pundits have also talked about a 4-1-3-2 system with Neymar as a number 10 behind Mbappe and Cavani. Add in Dani Alves on the right, Julian Draxler on the left and Marco Verrati in front of the back four and that would certainly make season tickets at the Parc des Princes value for money.

It’s a great problem for PSG head coach Emery but he’ll be under more pressure than ever to guide this team to Champions League glory.