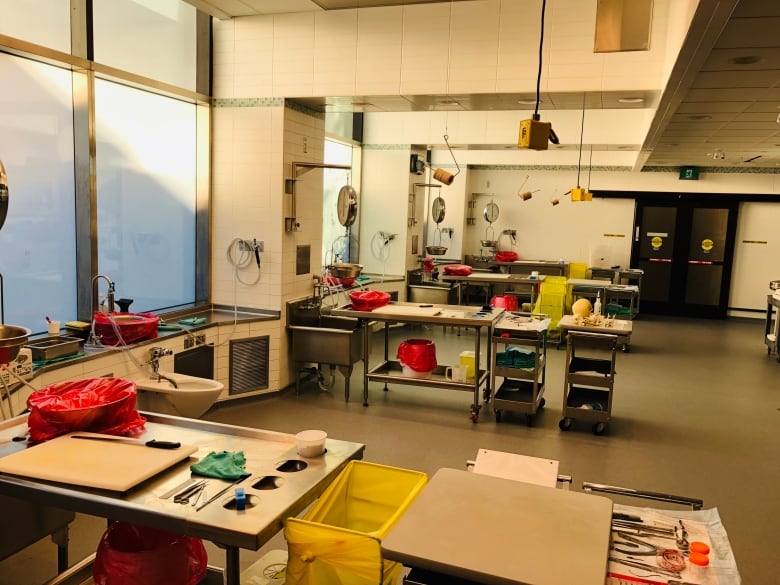 The Nova Scotia Medical Examiner Service won’t seek help from outside the province as it investigates the deaths of 22 people in last month’s mass killing, even though experts say the sheer size of the investigation poses a challenge.

Forensic pathologists must piece together how each victim died. They perform autopsies, identify bodies and determine cause of death, all critical to homicide investigations.

Their work in Nova Scotia got more complicated on April 18-19.

A gunman’s rampage that started in Portapique, N.S., left 22 victims dead and several homes and vehicles destroyed by fire.

Several of his victims were shot to death and eight were recovered from burned buildings and vehicles, according to the RCMP.

With 22 bodies to examine, some of them burned, getting solid answers for both investigators and the families of victims will be difficult, says Dr. Chris Milroy, the director of the Eastern Ontario Forensic Pathology Unit and a University of Ottawa professor.

“For Nova Scotia, this, of course, is a massive event,” he said. “The number of homicides that occurred in Nova Scotia in the incident are more than their normal annual caseload for homicide.”

From 2014-18, the Nova Scotia Medical Examiner Service saw an average of 13 homicide victims a year, according to Statistics Canada.

Despite the huge death toll in the shooting, the province’s Department of Justice said the cases will be managed here.

“Nova Scotians can be assured that the Nova Scotia Medical Examiner Service has adequate and appropriate capacity and resources in place to manage situations of this nature,” Barbara MacLean, a spokesperson for the Department of Justice, said in an email.

The investigation into the mass killing is ongoing, even though no criminal case is being assembled. That’s because the accused gunman was shot dead by police.

Still, Milroy said it’s important to determine how people died to help families with their loss. People want to know if their loved ones suffered, for example.

“Those are questions that we do get asked,” he said. “So people do want to know those answers.”

Getting those answers can be hard in a case this big. Milroy estimates it would take the medical examiner’s office several days to process 22 bodies.

He said despite the need to find answers quickly, most offices try to keep their staff from working too much overtime.

He said it can create problems if a staff gets overburdened.

“You have serious consequences after if you stress people out,” Milroy said, “so you may extend the days a bit, but you have to be sensible as a chief and not overwork people too much.”

He said if Ottawa was facing a similar mass killing it would keep his office busy for two or three weeks because there would be a buildup of routine cases while workers investigated the killing.

The house and vehicle fires in the Nova Scotia case also complicate the investigation. If a body is severely burned, determining the cause of death can be difficult.

Since so many people were shot by the gunman, any burned body may need to be X-rayed to determine if a person was shot and killed before their body was burned, or if they died from the fire, said Milroy.

Figuring that out can take time.

“It’ll take a long time, they have to be patient,” said Dr. Chitra Rao, interim director of the regional forensic unit in Hamilton.

“They want to know the truth, they want to know exactly what happened, what caused this person’s death. They shouldn’t be in a hurry, they should leave it to the medical examiner or forensic pathologist to complete their report.”

Rao said the deadline for those reports is usually 90 days, but it could take months longer depending on the wait time for test results.

In the meantime, a family could be told the cause of death while the report is being finished.

In some cases, visual identification may be impossible. DNA and dental records may be the only way to make a positive identification.

“You don’t want a family to have a body that’s not their next of kin, so you have to make sure that we are releasing the body to the proper family,” said Rao.

Every year the province’s medical examiner service performs up to 800 autopsies, according to an interview the service did with CBC News in 2018.