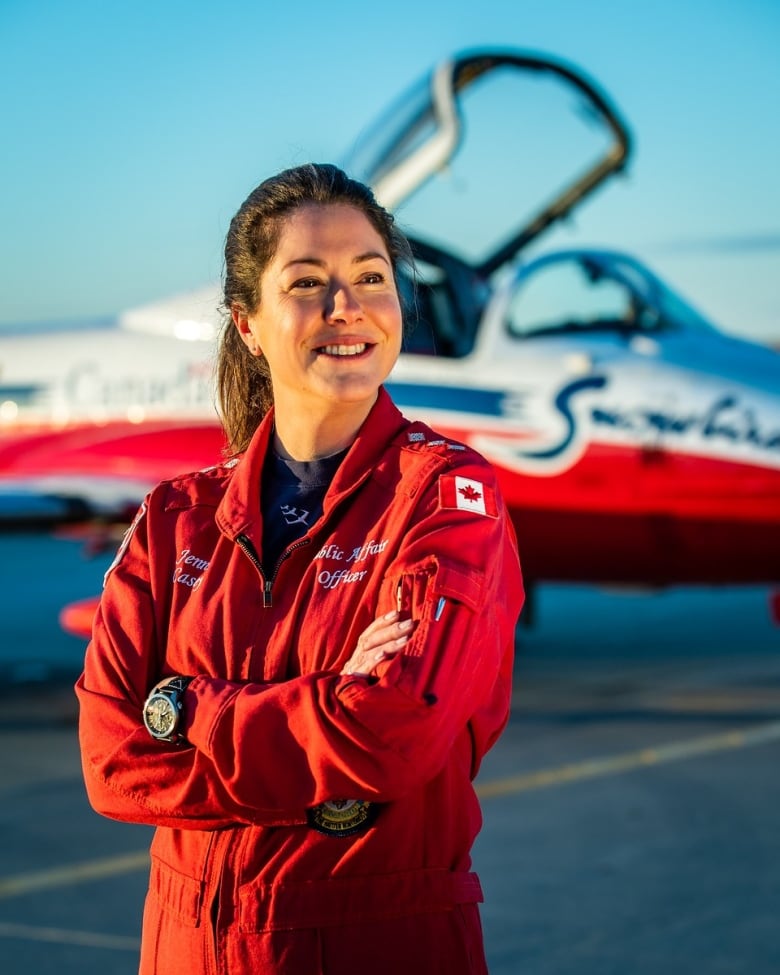 The Canadian Forces Snowbirds’ cross-country tour to raise people’s spirits during the COVID-19 pandemic turned to tragedy Sunday when one of its planes plunged into the ground in Kamloops, B.C., killing one member and injuring another.

The Snowbirds jet crashed shortly after takeoff and burst into flames in the front yard of a house.

Capt. Jenn Casey, a public affairs officer with the Snowbirds, died in the crash, the Canadian Armed Forces said in a statement.

The pilot of the CT-114 Tutor aircraft, Capt. Richard MacDougall, sustained serious injuries in the crash, but they are not considered life-threatening.

Capt. Casey is from Halifax and joined Canada’s Armed Forces in 2014 after several years working as a journalist, according to her biography on the Royal Canadian Air Force website.

The crash happened before noon PT, shortly after the jet took off from the Kamloops Airport. Witnesses say it was following another jet when it appeared to veer upward and circle the tarmac before going into a nosedive.

Video shows two puffs of black smoke coming from the plane and appears to show at least one person ejecting from the jet shortly before it hit the ground in a residential area near Glenview Avenue and Schreiner Street.

It is with heavy hearts that we announce that one member of the CF Snowbirds team has died and one has sustained serious injuries. We can confirm that we have contacted all primary family members of those involved. More information will be communicated in the near future.

“Canadians look at the Snowbirds as a source of joy and an exhibition of the incredible feats that our people in uniform are capable of,” Defence Minister Harjit Sajjan said in a statement Sunday evening.

“Operation Inspiration was intended to lift the spirit of Canadians at this difficult time and the Snowbirds accomplished their mission. I know that all Canadians grieve this tragic loss.”

In a statement, Prime Minister Justin Trudeau said he is “deeply saddened” and that his thoughts are with the families of Capt. Casey and Capt. MacDougall, and the entire Snowbirds team. He thanked emergency crews in Kamloops for responding quickly.

“For the past two weeks, the Snowbirds have been flying across the country to lift up Canadians during these difficult times,” Trudeau said.

“Every day, they represent the very best of Canada and demonstrate excellence through incredible skill and dedication. Their flyovers across the country put a smile on the faces of Canadians everywhere and make us proud.

Governor General Julie Payette said she was devastated by Capt. Casey’s death, and paid tribute to the Snowbirds.

“During a difficult time for our country, they were a source of hope, travelling across Canada away from their families, for us,” Payette said in a statement.

“This accident today really shakes us to our core, but we will do our best to support the military and the men and women in service,” Christian said during a media briefing Sunday afternoon.

Emergency crews from the Kamloops Airport initially responded to the incident. The Snowbirds were scheduled to do a flyover of the Okanagan area on Sunday. They will remain grounded for now, Christian said.

The CAF Flight Safety team will leave Ottawa Sunday night to begin its investigation into the circumstances of the crash, the CAF said.

Kamloops RCMP are asking the public to avoid the area. They’re asking anyone who may have captured the crash on video to contact them.

Witness Annette Schonewille said she saw the jet fall from the sky.

Schonewille was parked with friends having coffee at McArthur Island Park in Kamloops.

She said she watched one Snowbirds plane fly up and when the second one went after it, it appeared to catch on fire.

“The one plane continued and the other one … was a ball of fire,” she said.

“No noise, it was strange, and then the plane just did a cartwheel and fell right out of the sky. Just boom, straight down, and then a burst of black, black smoke.”

‘It was complete chaos’

Nolyn McLeod lives across from the house where the plane landed.

He was sitting in his yard with his father when the plane went right over them, about three metres above their roof, he said.

“We saw the pilot eject like maybe two storeys high, and then the plane with no pilot in it went right between me and my neighbour’s house,” he said.

The plane curved into the street and hit the bedroom window of the neighbour’s house, he said.

McLeod said he ran to the front of that house, then tried to direct a gathering crowd away from power lines.

The charred plane was sitting in the neighbour’s front lawn, he said.

“The house was all burnt and charred; the roof was caving in,” he said. “It was pretty bad. The whole lawn was on fire.

“It was complete chaos. People were yelling and screaming. We thought we were getting bombed or something. That’s how hectic it was.”

WATCH | Kamloops, B.C.’s Mike Trafford, who was a witness to the scene, describes what he saw:

A Canadian Forces Snowbirds jet has crashed in Kamloops, B.C. Mike Trafford, who was a witness to the scene, describes what he saw. 3:39

Elwood Delaney said he watched two Snowbirds jets take off from the airport near his house.

“The other one didn’t quite bank up high enough and it kind of got it behind the trees and [I] saw a parachute come out of it and then smoke there,” he said.

“I saw one parachuter who landed on a house close by.”

Photos provided to CBC News by Delaney show the remains of a jet in the front yard of a house and what appears to be a parachute on the roof.

Neighbours and passersby crowded around the front yard behind police tape.

Rose Miller lives directly across the street from the house where the plane hit and said a couple who live there are in their 70s.

The woman had been in the basement while the man was behind the house at the time of the crash, she said.

Both of them are OK, she said, noting she’d spoken with them after they were moved to a nearby street.

Christian said one home was significantly damaged by fire, and an injured person was found at another home.

There was a large amount of debris around three houses, he added, saying the incident has “shaken that neighbourhood.”

The Transportation Safety Board said it is offering assistance to the Canadian Forces with its investigation into the crash.

The jets had arrived in Kamloops on Saturday after flyovers in Alberta.

On Sunday morning the Snowbirds tweeted that some mountain passes had low cloud cover, which would be unsafe to fly through.

In an Instagram story post on Saturday, a Snowbirds pilot said the team was in Kamloops and was dealing with some “electrical malfunctions.”

This is the latest incident involving the military’s aerobatic team in less than a year.

Ian Hanomansing talks to aviation journalist Mark Miller about the pilot’s decision to gain altitude in the moments before the crash. 2:58

Another Snowbirds jet went down in the U.S. state of Georgia last October, where the team had been scheduled to perform an air show.

Capt. Kevin Domon-Grenier sustained minor injuries when he ejected from the plane, which crashed into a farmer’s field. No one else was hurt.

The Snowbirds have performed at air shows across Canada and the U.S. for decades and are considered a key tool for raising awareness recruiting for the air force. Eleven aircraft are used during shows, with nine flying and two kept as spares.

The air force obtained its Tutor jets in 1963 and has used them in air demonstrations since 1971. Prior to Sunday’s crash, seven pilots and one passenger had been killed and several aircraft had been lost over the course of the Snowbirds’ history.