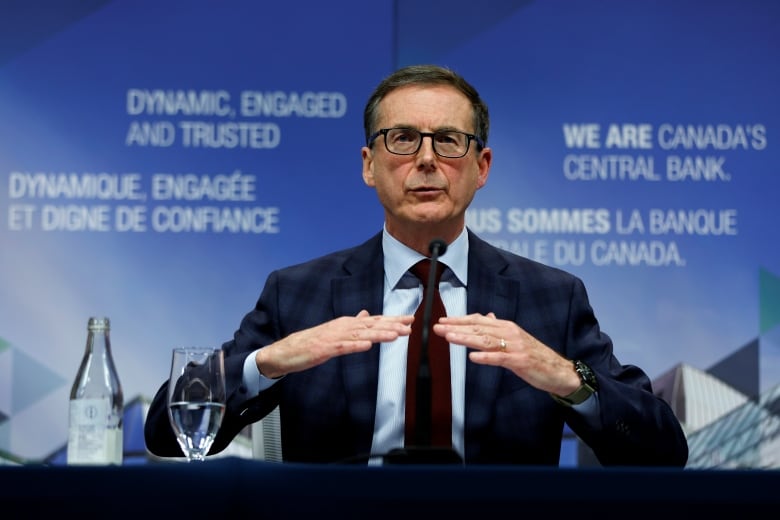 There are signs that the Canadian jobs landscape is currently going through a transformation that will affect us all, but with the country in the midst of an election, many of the complex issues have been hard to address.

Later on Friday, Statistics Canada will release jobs numbers for the month of August. Despite signs of an economic slowdown in late spring, a poll of economists by Bloomberg shows that the Canadian economy is expected to crank out jobs again in this report.

In July, Statscan reported that the economy created 94,000 jobs, driving the unemployment rate down to 7.5 per cent.

The poll of economists shows expected job growth continuing, despite any impact of the pandemic’s fourth wave, with estimates of between 50,000 and 160,000 new jobs in August. We’ll know for sure shortly after 8:30 a.m. ET.

But whatever the short-term progress on job creation, many in the know — including Bank of Canada governor Tiff Macklem — see the Canadian economy charging back toward full employment this year and next, as the central bank considers cutting back on stimulus and raising interest rates.

Speaking Thursday in French to the Quebec Chamber of Commerce, Macklem described both a strong recovery in jobs hit hard by COVID-19 and at the same time a complicated shift in the way Canadians work.

“It is clear that the pandemic has had a profound effect on the labour market,” Macklem said in a question-and-answer session after his speech. He described the impact as complex.

As many reports have suggested, despite high unemployment, employers complain that many jobs remain vacant. The K-shaped recovery has meant that some of the lowest-paid workers have been the most affected, including those in retail and restaurants. Macklem said he expects the recovery in those sectors to lead to a “reduction in those inequalities.”

In the current election campaign, all of the candidates know that jobs remain an important issue. An outline of the parties’ positions on jobs is encapsulated in this CBC platform outline (scroll down or click on “Jobs” on the directory at the left).

But as former Progressive Conservative leader Kim Campbell once famously implied, it is sometimes hard to address issues in all of their complexity while on the stump. Some of the profound effects that Macklem mentioned are still not understood and do not lend themselves to election time sound bites.

In an effort to get a handle on the confusing state of the current labour market, the Bank of Canada is currently working on a forthcoming research paper titled Assessing Labour Market Slack for Monetary Policy.

‘Labour slack,’ not unemployment, is key

“Labour slack,” while it includes the unemployed people measured by the Friday jobs numbers, is much more than that. It includes all of the people who would really like to work more but for various reasons disappear from the jobless numbers.

It is a concept familiar to Jim Stanford, the well-known labour economist who now heads the Canadian-Australian Centre for Future Work.

As he said in an email conversation, a 7.5 per cent rate of unemployment is just the tip of the iceberg.

“It doesn’t count people working very short hours, who want and need more work,” Stanford said, pointing out that Statistics Canada counts you as employed if you work a single hour in a week. “It also excludes people who want to work but aren’t actively seeking it to the satisfaction of Statistics Canada’s definition.”

According to “labour slack” definitions, there are more like three million Canadians who want more work, representing a labour underutilization rate of about 15 per cent.

These kinds of numbers — rather than just the unemployment rate we see in news headlines — are why Macklem insists the central bank must continue to stimulate the economy with low interest rates and bond purchases.

“The [Bank of Canada’s] Governing Council judges that the Canadian economy still has considerable excess capacity, and that the recovery continues to require extraordinary monetary policy support,” the central bank said in its Wednesday monetary policy report, a point reiterated in Macklem’s Thursday speech.

One of Macklem’s fears for the economy is if a fourth wave leads to more labour slack. The longer people are unemployed, or underemployed in jobs that don’t use their skills, the more those skills will lose their value in the labour market.

In the U.S., analysts are trying to understand a labour market where there are 10 million jobs going begging and eight million people begging for work. In Canada, the difference is not so stark, but employers in many parts of the country continue to complain they cannot find workers in a post-pandemic world. It remains a conundrum.

Many small businesses and their representatives at the Canadian Federation of Independent Business (CFIB) have blamed government handouts. Last month, the CFIB’s senior vice-president of national affairs, Corinne Pohlmann, told me that “people should not be better off on a government-assistance program than they would be when they were working.”

Stanford, a longtime advocate for a living wage, dismisses the CFIB’s complaint, saying it is clear that the market is telling us that businesses that cannot find workers should be paying more. U.S. studies, referred to above, indicate the pandemic has shown people that there is more to life than working long and unpredictable shifts at an unpleasant job. Others have taken the opportunity to change careers and seek better jobs.

According to a recent poll from KPMG, 70 per cent of Canadian businesses are struggling to find skilled talent, with the health care, food and transportation industries in greatest need. 2:07

“Better wages will help. Better and more regular hours are even more important, I would suggest,” Stanford said, going back to the labour slack argument. “Inadequate hours are a bigger source of low earnings than low wages.”

He said training and offering a genuine career path — rather than expecting an endless supply of disposable workers — are more likely to attract employees at this stage.

Stanford said he has seen evidence that many smart employers are already trying to do that.

For the Bank of Canada governor, while the pandemic may be helping to transform our economy and our job market, its disruptions for workers and employers is not over.

“The virus and pandemic-related disruptions have not gone away, and they will continue to disturb our lives and weigh on economic activity,” Macklem said.