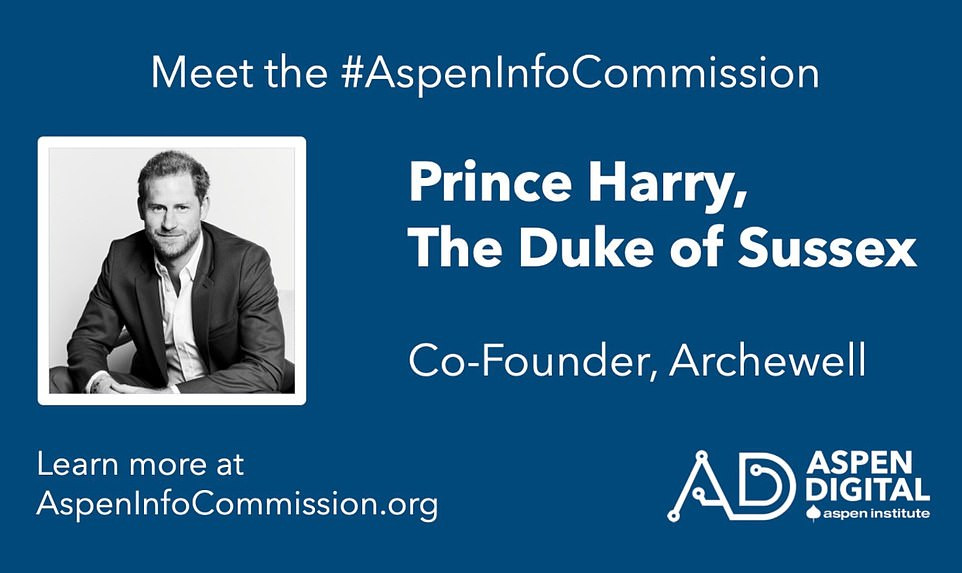 Prince Harry has taken on another new job at Aspen Institute.

The Duke of Sussex is joining the left-leaning Aspen Institute’s new Commission on Information Disorder in Washington DC along with 14 others including Kathryn Murdoch, the wife of Rupert Murdoch’s son James, who resigned from his father’s media empire last year.

The organisation lists him in a bio announcing his new role as ‘a humanitarian, military vet, mental wellness advocate, and environmentalist’.

The news comes the day after he was announced as taking on a new job at, BetterUp, a start-up coaching firm based in Silicon Valley after he and his wife Meghan Markle stepped back from the Royal Family last year.

He is the first chief impact officer of BetterUp Inc, a San Francisco-based start-up that provides employee coaching and mental health assistance.

On his new job, Harry said in a statement: ‘As I’ve said, the experience of today’s digital world has us inundated with an avalanche of misinformation, affecting our ability as individuals as well as societies to think clearly and truly understand the world we live in.

‘It’s my belief that this is a humanitarian issue and as such, it demands a multi-stakeholder response from advocacy voices, members of the media, academic researchers, and both government and civil society leaders. I’m eager to join this new Aspen commission and look forward to working on a solution-oriented approach to the information disorder crisis.’

Following his employment, the company said: ‘As co-founder of Archewell, [Harry] is focused on driving systemic change across all communities through non-profit work as well as creative activations.

‘The mission across Archewell—which currently includes Archewell Foundation, Archewell Productions, and Archewell Audio—is united behind the deeply held belief that compassion is the defining cultural force of the 21st century. ‘Prince Harry has dedicated his life’s work to advancing causes that he is passionate about.’

The commission is being funded by billionaire entrepreneur Craig Newmark, who founded Craigslist, a classified adverts website.