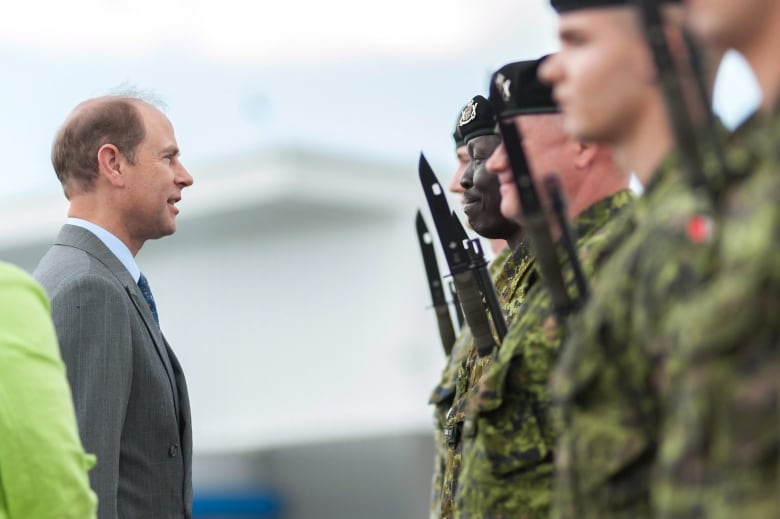 Hello, royal watchers. This is your regular dose of royal news and analysis. Reading this online? Sign up here to get this delivered to your inbox.

Royal visits to Canada may be out of the question right now, but Prince Edward took to Zoom the other day to check in virtually with Canadian Armed Forces reserve regiments that have him as their colonel-in-chief.

For about an hour, Edward shared the screen with commanding officers from the Prince Edward Island Regiment, the Hastings and Prince Edward Regiment in eastern Ontario and the Saskatchewan Dragoons, along with two reserve units in the United Kingdom.

Officers told Edward how their regiments turned to online training after the pandemic struck, how they worked to support the mental health of their members and how they prepared to help as needed in their communities.

Maj. Mack Driscoll of the Saskatchewan Dragoons welcomed the chance to speak online with Edward, who last visited the regiment in person in 2016.

“I think that what I really appreciated about it is [how] the adoption of virtual visits across the board this year has certainly made people more accessible than … they were in the past,” Driscoll said in an interview.

Edward was “really interested” in how the last year has affected the regiments when it comes to training in a virtual environment, and the tasks they have taken on in support of government pandemic response efforts, Driscoll said.

“Also, we had quite a discussion on just the mental resiliency of soldiers and how we all worked to support our unit members during a really challenging time.”

Members of the Royal Family have taken to virtual visits in a major way throughout the pandemic, opening facilities, speaking with numerous front-line workers and, in the case of Queen Elizabeth, even attending online for the unveiling of a portrait of herself.

Lt.-Col. Glenn Moriarity, commanding officer of the Prince Edward Island Regiment, said it was a “real honour and a privilege” to have the opportunity to speak with Edward.

Moriarity outlined how in the early days of the pandemic they shifted to training from home — and returned later to in-person sessions — along with offering his perspective on morale, which is “quite high” right now among members of the regiment.

“It was a very relaxed conversation [with Edward],” Moriarity said in an interview. “It was very natural.”

Members of the Royal Family serve as colonel-in-chief of numerous military units across Canada.

Edward “is always … very well read in to the situation both with our regiment and just the overall situation in the military in general,” said Driscoll.

“I think what we all took away from the conversation was just how similar our experiences are, both amongst the Canadian regiments and the regiments in the U.K…. He was certainly very interested in that, especially the well-being of the units and the members.”

Doing a virtual visit raises the possibility of similar online contact in the future, although Edward also told the officers he hoped that as soon as travel would allow, he would be able to visit in person.

The hour-long session was not without a lighter moment or two.

Driscoll’s sergeant major, Master Warrant Officer Rob Tryhorn, was also on the Zoom call. But reservists are part-time soldiers, so his participation came while he was at work. And in his case, work is driving a truck.

“He had to join the call from a truck stop in Montana,” said Driscoll.

“So I think that was really something that His Royal Highness got a kick out of … as [Tryhorn] is kind of huddled at a table wearing a mask and I’m sure everyone in the truck stop is wondering exactly what is going on, and here he is talking to Prince Edward.”

William and Kate make their own mark

After the explosive Oprah Winfrey interview with Prince Harry and Meghan, Duchess of Sussex, laid bare their view on their departure from the upper echelons of the Royal Family, many looked to the House of Windsor for a response.

The interview raised numerous serious issues and allegations around race, mental health and support within the family itself.

Buckingham Palace responded with a short statement two days later, and Harry’s brother, Prince William, in response to a question from a reporter, said the Royal Family is “very much not a racist family.”

Beyond that, however, there has been no official comment. But William’s reaction, along with how other members of the family are carrying on with their duties, may offer some insight into their position.

“Many millions of people watched Oprah and millions will have believed everything Harry and Meghan said,” royal author and biographer Penny Junor said via email this week.

“I think William will have been furious with his brother and sister-in-law, and his remark to the reporter’s question about whether the family was racist was an admirably measured response.

“It was important for someone to say something, but I think he and the rest of the family know that the best way to counter all the claims and accusations is to keep on trucking, to continue the work, to be visible and to behave with dignity.”

Kate also made a low-key appearance at a vigil in honour of a London woman who was slain while walking home alone from a friend’s house.

William and Kate also posted online cards their children had made for Mother’s Day, with one mentioning that William missed his mother, “Granny Diana.”

As touching as the cards are, in that action of social sharing from royal parents who have been vigorous in protecting their children’s privacy, it was hard not to see at least a bit of public positioning.

“I think this was a gentle way of reminding people that William was Diana’s son, too — and that Harry was not the only one who lost his mother,” said Junor.

William and Kate have continued with royal engagements, some related to the pandemic, including an appearance at Westminster Abbey, where they met people there to receive their COVID-19 vaccine.

The public spotlight on William continued last weekend when he was the focus of a report in the Sunday Times magazine that spawned numerous other news reports. Many cited comments from insiders regarding how as King, William would “robustly challenge” advice from his prime ministers in private if he felt it would damage the monarchy.

Junor said she’s sure William’s friends quoted in the article would not have spoken “without at least a nod” from him.

“I suspect there is a feeling that Harry and Meghan’s behaviour is providing a very distracting sideshow and taking the spotlight away from the important work that the rest of the family does,” Junor said.

“Harry claimed that William is trapped but can’t escape, as he did. I guess William is keen to demonstrate that that is not the way he feels about royal duty and that he accepts his destiny and, like his grandmother, will devote his life to the service of the country.”

A baby boy — on the bathroom floor

When Zara and Mike Tindall let it be known they were expecting their third child, the news was in keeping with their laid-back ways, and came from a decidedly unroyal source.

The father-to-be — a former rugby player — took to his sports podcast late last year to share the word that he and Zara, the Queen’s eldest granddaughter, were looking forward to the arrival of a brother or sister for daughters, Mia, 7, and Lena, 2.

So it was perhaps not that much of a surprise that Tindall turned to his The Good, the Bad & the Rugby podcast again this week to announce the birth of their son on Sunday.

Buckingham Palace said Queen Elizabeth and Prince Philip were “delighted” with the arrival of Lucas Philip Tindall, their 10th great-grandchild.

What might have been more of a surprise for the Tindalls was the way in which the baby — whose middle name honours both sides of the family — came into the world.

“So yeah, it was running to the gym, get a mat, get into the bathroom, get the mat on the floor, towels down, brace, brace, brace.”

“It’s fascinating to see the pictures of Mars — unbelievable, really, to think one can see its surface.”

— Queen Elizabeth, in reference to photos of the Red Planet taken by NASA’s Perseverance rover, during a virtual event to celebrate British Science Week. Elizabeth also got a lot of laughter from the scientists she was speaking with when she recalled her 1961 meeting with cosmonaut Yuri Gagarin, the first human to travel into space. When asked what he was like, Elizabeth said, “Russian,” before adding that “he was fascinating, and I suppose being the first one, it was particularly fascinating.”

I’m always happy to hear from you. Send your ideas, comments, feedback and notes to royalfascinator@cbc.ca. Problems with the newsletter? Please let me know about any typos, errors or glitches.