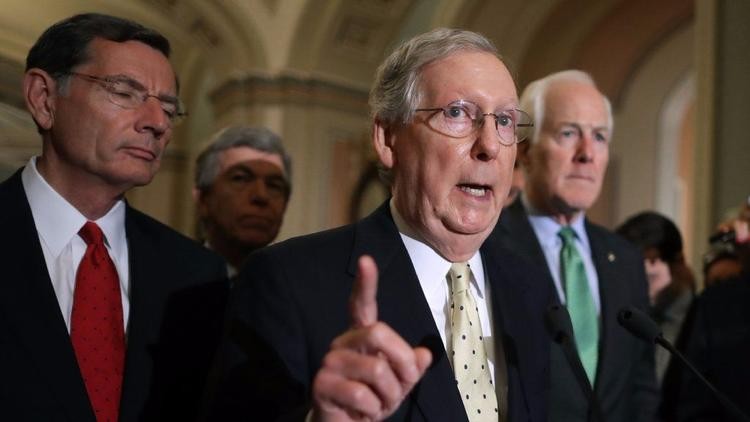 The Republican National Committee is joining a slew of deep-pocketed conservative PACs in taking aim at GOP lawmakers who say they will vote no on repealing Obamacare.

With no significant legislative successes in the months since the elections, Republicans are anxious to show that with control of the White House and majorities in both houses of Congress, they can get on with their agenda — a key component of which has long been rolling back President Obama’s signature health care law.

In a letter sent out to voters on Wednesday, RNC chairwoman Ronna McDaniel warned that if the Republican take-down of the Affordable Care Act should fail, “we could lose the midterm elections” in 2018.

“I’m going to give President Trump a MASSIVE list of all the American voters who want ObamaCare repealed,” McDaniels wrote to Republican voters. “He’ll show that list to any Senate Republican who refuses to pass our repeal bill.”

And former Virginia Attorney General Ken Cuccinelli tells NPR that his Senate Conservatives Fund will try to “identify high-quality conservative opponents to folks who flip on this.”

“[When] you’ve got people who flip on a vote that is so important to not just the conservative base but the entire Republican base, this one vote can set up an election. And we’re determined to help, monetarily, the conservative opponents of folks like the three you’ve seen so far,” Cuccinelli said, speaking with Morning Edition’s Steve Inskeep.

The heat has been turned up further on wayward Republicans after this week’s one-two punch to Senate Majority Leader Mitch McConnell, who first saw GOP defections send his party’s Obamacare replacement down in flames and then a day later, scuttle the latest attempt at a repeal-only measure.

But McConnell has vowed to go ahead with a procedural vote on repealing the ACA on Monday, hoping to bring at least two of three recalcitrant senators — Lisa Murkowski of Alaska, Shelley Moore Capito of West Virginia and Susan Collins of Maine — into line.

During the Obama administration, Republicans in Congress voted to repeal all or part of the ACA some 60 times. But the votes, sure to be vetoed by the White House, were little more than symbolic gestures meant to fire up the Republican base.

The Club for Growth, a small-government, anti-tax group with its roots in the supply-side economic philosophy of the Reagan era, accused Republicans of “hiding behind President Obama’s veto.”

In a statement Tuesday, the group said: “With the Obama impediment gone, moderate Republicans—most of whom supported the 2015 legislation—will now be forced to reveal their true colors.”

In April, Club for Growth launched TV spots to pressure lawmakers on what was then billed as “repeal and replace.”

FreedomWorks, like Club for Growth, is making the repeal of Obamacare “a key vote,” meaning it will weight it heavily on lawmaker scorecards.

The conservative PAC says it “has issued a key vote in support of the motion to proceed, which we will triple-weight on our 2017 Congressional Scorecard, to begin the amendment process, starting with the 2015 ObamaCare repeal bill as the base text.”