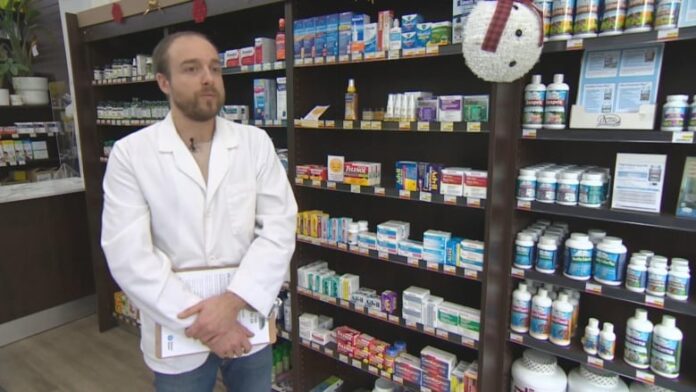 Three weeks after the Ontario government gave pharmacists the green light to prescribe Paxlovid as a treatment for COVID-19, prescriptions for the potentially life-saving antiviral drug have more than doubled.

But pharmacists and experts say there are still barriers that may make it difficult or impossible for some patients to obtain Paxlovid from a pharmacy, including strict eligibility criteria, staffing challenges and some pharmacies’ lack of access to medical information.

Provincial data shared with CBC Toronto shows 4,342 courses were dispensed in the week after the policy was announced by Health Minister Sylvia Jones on Dec. 8 — double the previous week and the highest weekly number since the drug became available, according to the minister’s office.

The number of prescriptions dispensed per day in the community increased by 129 per cent between Dec. 12 and 29, according to the Ministry of Health.

The new prescribing policy, which came into effect on Dec. 12, was framed as a way to expand access to the medication, increase protection for the most vulnerable, and ease hospital pressures. It came after CBC reported in September a low usage rate for the medication across the country.

“Just like with the vaccines, pharmacies are your most accessible touch point to health care,” said Eddie Petrov, owner of Cabbagetown Pharmacy. “It makes sense that as you make a service more accessible, more people will tend to utilize it.”

Paxlovid not for everyone

Paxlovid is a combination of pills that can be obtained for free with a prescription and taken at home, but must be started within five days of symptoms appearing.

According to the Ontario government’s eligibility criteria, those who qualify include people over the age of 60, anyone who is 18 years of age or older and is immunocompromised, as well as people between the ages of 18 and 59 with chronic medical conditions or who are not up to date on their vaccines.

Those who do qualify and want to get a prescription from a pharmacist must find one who can quickly and properly assess whether it’s the right fit for them.

This is one of the most complicated drugs that we can prescribe.– Jen Belcher, vice-president of strategic initiatives and member relations, Ontario Pharmacists Association

That’s because while clinical trials have shown the antiviral to be safe, it has a number of drug-to-drug interactions that could cause negative health effects. Paxlovid can also cause negative effects if given to people whose kidneys or liver are not functioning properly.

“This is one of the most complicated drugs that we can prescribe,” said Jen Belcher, vice president of strategic initiatives and member relations for the Ontario Pharmacists Association.

“Sometimes it does take a little bit of time to stand up those sorts of programs and assess whether or not the pharmacy has the time and the labour needed to do this.”

Pharmacists must evaluate whether the patient is currently taking any medications, therapies, herbal products or recreational drugs that could cause complications. When there is a risk of interactions, Belcher said they can be managed by switching medications or taking a different dose. Some interactions can’t be managed at all, so prescribing Paxlovid would be inappropriate, she added.

Pharmacists must also determine whether the person’s kidney and liver function is adequate because patients with dysfunction in those organs could see the medication build up in their bodies, Belcher said.

Some of that information could be on file or easily obtainable for a regular patient visiting their local pharmacy, but wouldn’t necessarily be accessible for new patients or those dropping in from out of town. Other medical information can be retrieved through various online databases.

“It’s piecing together as accurate as history as possible, looking at the reliability of that information and then making a decision based off of all of those patient factors as to whether or not the likely benefit to you is greater than the potential risk,” said Belcher. “Different prescribers will have different comfort levels as to what the benefit versus risk is.”

Petrov, the pharmacist, said he hasn’t yet had any patients come in requesting a prescription for Paxlovid, but he would feel most comfortable prescribing it to a regular customer.

“People that I, as a pharmacist, know are definitely a lot easier to help because I’m a little bit more aware of their medical profile, other medical history, what medications they’re on,” Petrov said. “Whereas someone that’s [from] out of town, you don’t necessarily have the same rapport or familiarity with them, which would make it of course a little bit more difficult to assess whether they would qualify for a prescription.

“That’s not to say that it’s not possible, of course. It’s just that we would have to kind of dig through many of the resources where we can pull information from.”

Petrov said he has access to databases through the Ministry of Health that allow him to retrieve some patients’ blood work, doctor’s notes, specialists notes and more, all of which help him in his decision-making.

But not all pharmacists across the province have access to those databases, said Dr. Kelly Grindrod, an associate professor of pharmacy at the University of Waterloo.

Grindrod said different regions use different systems, and pharmacists have to sign up and learn how to use them on their own.

“Rather than one big provincial initiative, you’ve got multiple smaller initiatives across the province, so you get variable access to systems depending on where you live,” said Grindrod.

Grindrod said onboarding all pharmacies onto these systems is an urgent priority, both for prescribing Paxlovid but also because pharmacists can now prescribe medication for 13 common ailments as of Jan. 1.

“I would expect in the next few months we’re going to see a lot of attention paid to making sure that not only are our pharmacies on these systems, but that they’re actually using the access that they have,” said Grindrod.