Dog dies after getting caught in illegal snare in western P.E.I. 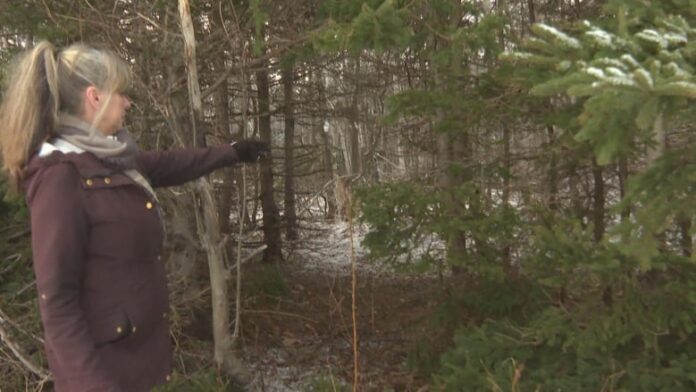 Some might describe it as a dog’s paradise — over 200 acres of private land in Kildare Capes, P.E.I.

It certainly was for one four-year-old Pyrenees named Caspie.

“She was clumsy and klutzy and just anybody that met her loved her,” said owner Debbie Travers. “She would come over, sit next to you … and look up at you with this one gold eye, one brown eye and go ‘don’t you just love me?'”

Caspie often explored the property that has been in the family for generations. But on Dec. 30, she ran into the woods and never came back.

After hours of searching, Caspie was found dead in an illegal snare.

“Our grief when we found out turned to anger, rage … we can’t grieve properly because of the situation in how she passed,” said Travers. “We miss her terribly.”

‘These traps are indiscriminate’

P.E.I.’s trapping season runs from mid-October until the end of March. But licensed trappers must have the landowner’s permission before setting any traps on private property.

According to the province, an individual was charged with trespassing following an investigation.

At least two dogs have been killed in snares in two months on P.E.I. In early November, a dog named Emma died after getting caught in an illegal trap in the Wright’s Creek area of Charlottetown.

“These traps are indiscriminate, they injure both the target and non-target animals,” said Aaron Hofman, the director of advocacy and policy for The Fur-Bearers, a wildlife protection charity.

“Dogs, they have keen senses of smell, so what’s gonna stop them from wandering into a trap versus, say, a coyote or fox?”

Hofman said he would like to see more regulations in place and better enforcement.

“We know that these traps are cruel, they’re inhumane, that animals suffer. We really want to see change to trapping, to the regulations to ultimately protect both wildlife and their pets, said Hofman.

“I think people do need to take that extra care and caution when out with their pets,” he said. “Obviously we want to see changes towards the traps themselves … but unfortunately it is a cruel reality of our life that these traps exist and our pets are getting caught.”

Travers is also calling for changes to trapping legislation to try and ensure those not abiding by the law receive more than just a “slap on the wrist.”

“It was barbaric,” she said.

“We had to cut the tree that the wire was wrapped around into different places in order to get her out of there…. We said ‘if there’s one snare, there has to be more.'”

Travers was right — three more traps were found nearby. And although the property has been searched extensively, she said she is “terrified” one may have gone unnoticed.

“Our pets aren’t on leashes. They don’t have to be. It’s our land,” she said.

“This is their safe place. This is where they’re supposed to be able to do whatever they want,” said Travers. “It’s not like she [Caspie] died of natural causes. She was taken from us for a reason that shouldn’t have been.”

“She hopefully didn’t suffer. We can just pray that she didn’t.”