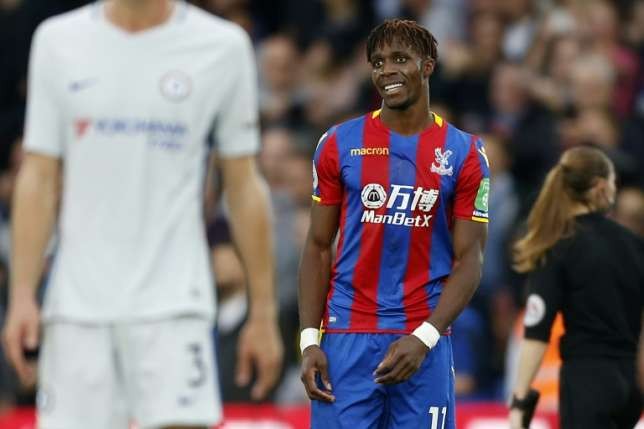 Wilfried Zaha returned to inspire bottom club Crystal Palace to their first win and first goals of the Premier League campaign with a shock 2-1 defeat of champions Chelsea on Saturday.

Tiemoue Bakayoko levelled with an 18th-minute header but Zaha — back in the side for the first time since injuring his knee in the opening-day defeat to Huddersfield — secured the victory with the second on the stroke of half-time.

Palace remain rooted at the foot of the table despite this notable win but Hodgson’s side were handed a much-needed boost by a victory that revived memories of last season’s dramatic survival bid.

For Chelsea, this was an early blow in their efforts to defend their Premier League title.

Having gone into the international break on the back of a home defeat to leaders Manchester City, a second loss leaves them already trailing Pep Guardiola’s side by nine points after just eight matches.

Palace manager Hodgson insisted he had seen positive signs from his players on the training pitch during the international break despite the dismal run of early-season form.

And the home side’s approach during the opening stages of the games suggested the manager had done a good job in restoring confidence to a side that has endured the worst start in Premier League history.

It helped that Zaha was back in the ranks and partnering Andros Townsend up front, the winger quickly demonstrating he had the capacity to worry the Chelsea backline.

He was not alone in that as Hodgson’s side quickly pressed the reigning champions back on their heels, particularly when Patrick van Aanholt found space on the left to deliver a testing low cross.

The breakthrough, though, came from the other flank after James McArthur had sent Townsend heading towards the byline.

The England international pulled the ball back towards Cabaye and while there was a huge amount of luck in the way the ball bounced off the Frenchman, against David Luiz, and then again off Cabaye, before deflecting past Thibaut Courtois via a hefty deflection from Cesar Azpilicueta, Hodgson’s side were grateful for any fortune that came their way.

It was the kind of goal that in normal circumstances would be quickly forgotten, but the reaction from within Selhurst Park confirmed the strike’s significance.

Palace, though, are not in desperate trouble for nothing and they quickly demonstrated the side of their game that has been far more prominent this season when they gifted Chelsea a route back into the match.

Tiemoue Bakayoko produced a good downward header from Cesc Fabregas’s corner but the way the French international was allowed to drift away from marker Van Aanholt was frustrating for Hodgson.

Chelsea may have been back in the game but Antonio Conte’s side were far from convincing.

Alvaro Morata was sidelined with a hamstring injury and deputy Michy Batshuayi struggled to make an impression as the focal point of the Blues attack.

And while Fabregas was Chelsea’s most threatening player when he advanced from central midfield, it was clear the industry of N’Golo Kante — another hamstring casualty — was missed.

Palace could sense they had an opportunity to claim a morale-boosting win and restored their lead immediately before half-time after Mamadou Sakho stepped up from the backline to dispossess Willian and release Zaha inside the Chelsea box.

The Ivorian did the rest, moving past Azpilicueta and placing a right-footed shot across Courtois and inside the far post.

Chelsea dominated the second half with Fabregas hitting the bar and Pedro, Charly Musonda and Marcos Alonso coming close but Palace defended impressively to hold on to their advantage.