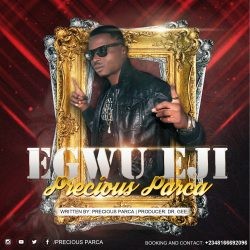 Precious Parca, the self-acclaimed “Multi-talented” singer with in depth vocal dexterity and diversity and tremendous dynamic skills releases his Fourth official single titled “Egwu Eji” produced by DR. GEE (The Hit Maker). “Egwu Eji “ is an emotional highlife-Pop love song, written, arranged, directed And performed by Precious Parca as he is popularly known. “Some said I sound like Duncan Mighty others said that I sound like Flavour, but who do you think I sounds like?… For me, I sound like Precious Parca o!”