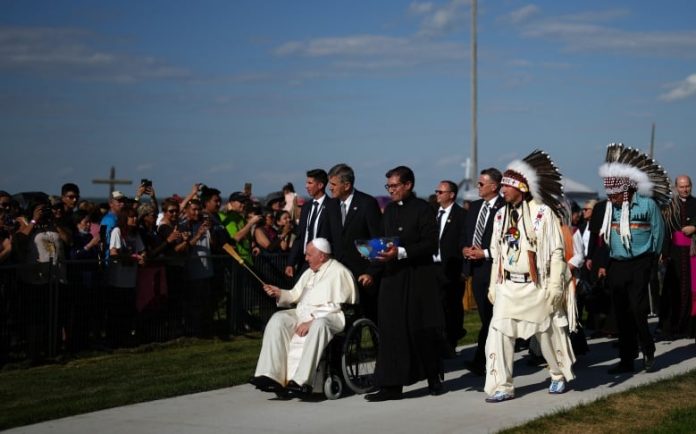 After delivering a speech calling for unity and healing at Quebec City’s Citadelle Wednesday evening, Pope Francis will hold a mass in a basilica to an audience of 2,000 this morning.

The mass will be broadcast on large screens outside the Sainte-Anne-de-Beaupré Basilica and on the Plains of Abraham at 10 a.m., as well as in a number of movie theatres in the province.

The basilica, a national shrine with high, vaulted ceilings, sits near the shores of the St. Lawrence River, 35 kilometres northeast of Quebec City.

St. Anne, by religious tradition the grandmother of Jesus, is particularly significant to Innu communities as grandmothers often deliver messages between households, said Andrée Paul, who is Innu from Pessamit in Quebec’s North Shore region and has been volunteering at the basilica for almost 30 years.

Pope Francis acknowledged the importance of St. Anne on his pilgrimage to Lac Ste. Anne in Alberta Tuesday, using the Cree word for grandmother.

“In thinking of your kokum, I also remember my own grandmother. From her, I first received the message of faith and learned that the gospel is communicated through loving care and the wisdom of life,” he said.

In his speech Wednesday in Quebec City, the Pope said he wanted to express “deep shame and sorrow” for the residential school system in Canada, in which “local Catholic institutions had a part.”

While he stopped short of denouncing the Catholic Church as a whole and its role in creating that system, Francis brought up the United Nations Declaration on the Rights of Indigenous Peoples, saying it would inspire a commitment from Catholic communities to promote Indigenous cultures.

He used the Canadian flag’s Maple Leaf as a symbol of multiculturalism and quoted the exhortation he wrote in 2020, Beloved Amazon, recognizing that “colonization has not ended.”

“Today too, there are any number of forms of ideological colonization that clash with the reality of life, stifle the natural attachment of peoples to their values, and attempt to uproot their traditions, history and religious ties,” Francis said.

Where to watch the mass

Seats inside the Sainte-Anne-de-Beaupré Basilica are reserved for Indigenous participants, delegations from Eastern Canadian dioceses and some government officials. The planning committee for the papal visit has confirmed residential school survivors will get front-row seats to the event.

Also read: 3 Men Reject Rachel’s Roses As She And Gabby Break Down Over Comparisons

Some 10,000 seats will be set up outside of the shrine, with the mass being broadcast there on giant screens. Two thousand of those seats are for the general public but all the tickets have already been snatched up.

Olivia Munoz, whose grandfather was Mohawk from Brantford, Ont., came from Los Angeles to represent family who experienced residential schools.

“We’re like the third generation, and we feel the effects of what was happened to them,” she said. “It was a subject that we only heard one time spoken, and that was it. But I feel the pain. I feel their pain.”

The Assembly of First Nations of Quebec has been in charge of making sure spots are distributed fairly among Indigenous communities in the province. Indigenous people who wished to participate in the event had to contact their nation’s designated representative to secure a spot.

The planning committee for the papal visit in Quebec is asking those who don’t have tickets to avoid the area and to instead watch the mass on the Plains of Abraham, where the service will be broadcast on giant screens for anyone to watch.

The city of Quebec will have special seating for those who have reduced mobility and who wish to watch the event on the plains. People in this situation should call 418-641-6050 to reserve a spot.

CBC News Network will broadcast the mass during a special program hosted by Andrew Chang. It will be possible to watch the CBC’s live coverage on a number of different platforms including CBC TV, the CBC News app and CBC Gem.

The mass is also being broadcast live on the Church’s website, which will have a live translation of the event into 12 Indigenous languages, and will be posted to its Vimeo channel afterward.

The mass will be held in Spanish, the Pope’s native language, but there will be English and French subtitles on the outdoor screens.

Ten Guzzo movie theatres will also be presenting live broadcasts of the mass. Entry is free, but the theatres suggest reserving your ticket online and ask that people arrive 30 to 45 minutes before the broadcast starts at 10 a.m.

Communion will also be offered at the showings to those who wish to receive it.