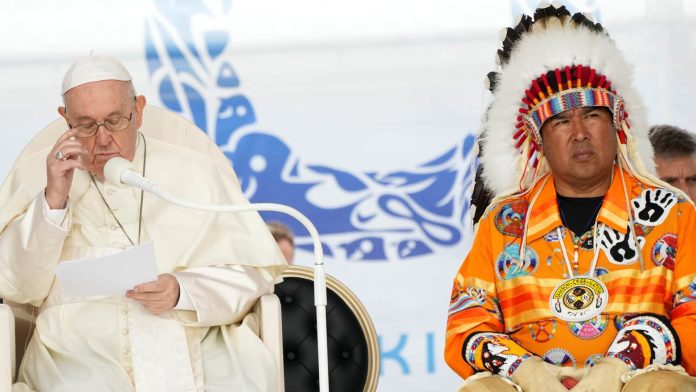 The first day of Pope Francis’s “penitential pilgrimage” began with a heartfelt apology delivered at the site of one of Canada’s largest residential schools and ended eight hours later with blessings and songs at an intimate service in the only designated Indigenous church in Canada.

In a morning event in a First Nation community in central Alberta, Pope Francis apologized for members of the Catholic Church who co-operated with Canada’s “devastating” policy of Indigenous residential schools.

He said the forced assimilation of Indigenous peoples into Christian society destroyed their cultures, severed their families and marginalized generations in ways still being felt today.

“I humbly beg forgiveness for the evil committed by so many Christians against the Indigenous peoples,” Francis told thousands of Indigenous people, including many survivors, who converged on Maskwacis, Alta., about 100 kilometres south of Edmonton

To applause from those gathered, the Pope repeatedly begged forgiveness for actions of the past, supported by many members of the Church, which created the “disastrous error” and “deplorable evil” of residential schools.

He said the memories of the children who never returned from residential schools have left him with a sense of “sorrow, indignation and shame.”

The policies of assimilation marginalized Indigenous people, robbed them of their language and culture, and indelibly affected relationships between parents and their children and grandparents and their grandchildren, he said.

“Here from this place, associated with painful memories, I would like to begin what I consider a pilgrimage. A penitential pilgrimage,” he said, speaking from the site of the former Ermineskin Indian Residential School, one of the largest in Canada. 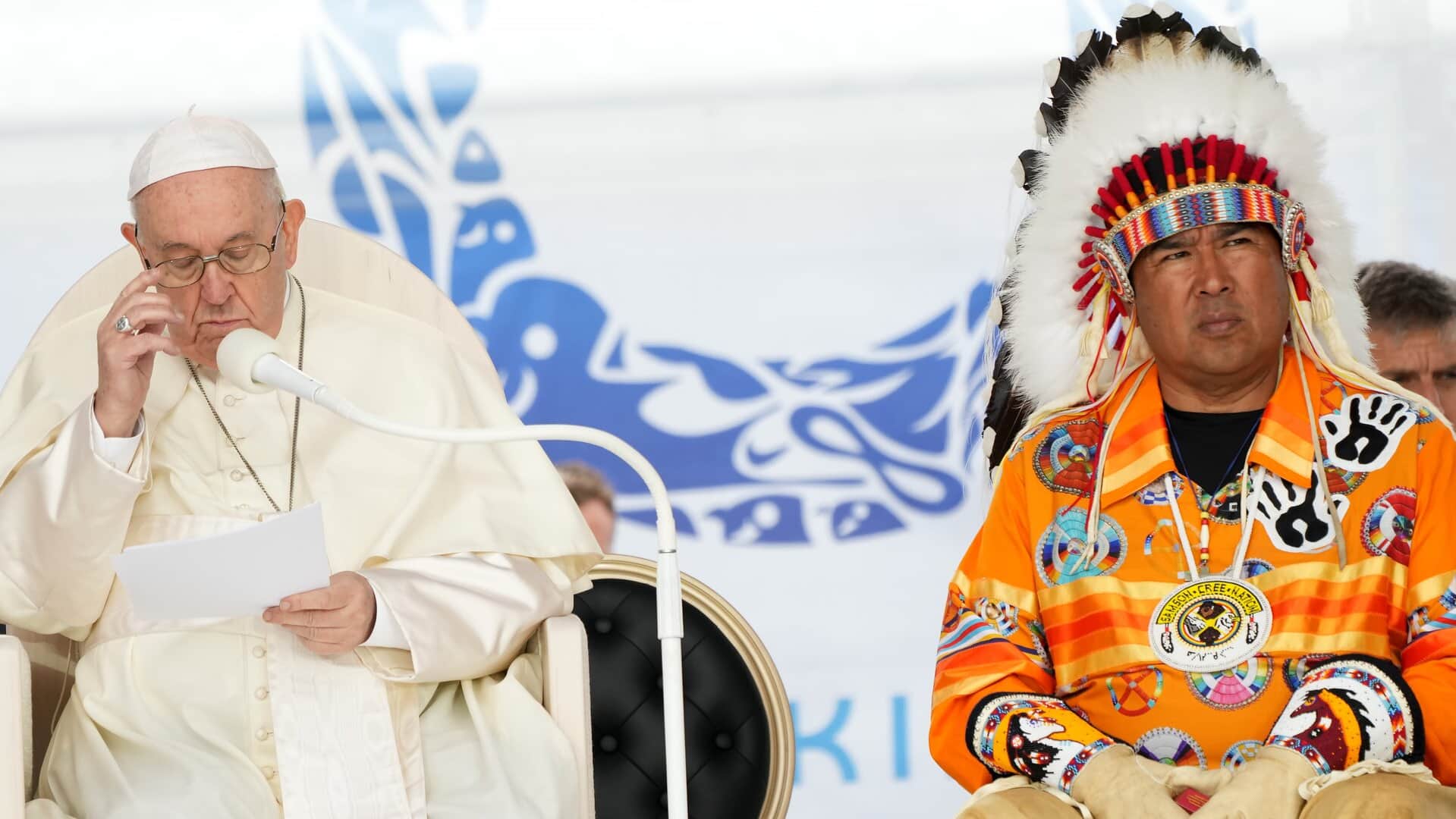 Pope ‘deeply sorry’ for ‘colonizing mentality’ of many Christians

During his visit to Maskwacis, Alta., Pope Francis apologized to survivors of residential schools for the ways in which members of the Catholic Church co-operated in the cultural destruction of Indigenous life.

Francis’s words on Monday went beyond his earlier apology for the “deplorable” acts of missionaries and instead took responsibility for the church’s institutional co-operation with the “catastrophic” assimilation policy, which Canada’s Truth and Reconciliation Commission has said amounted to a “cultural genocide.”

The Pope spoke in Spanish, his first language, and it was translated into English by a priest. Translations were also available in several Indigenous languages.

He said his apology is only the first step in making amends with Indigenous people in Canada and that a serious investigation must be conducted into the facts of what occurred in the past.

Five teepees were set up at the location for the Pope’s visit — four representing the nations of the land and the fifth a symbol of the entrance to the former school.

As part of the ceremony, Francis returned a pair of moccasins to Marie-Anne Day Walker-Pelletier, a retired chief of Okanese First Nation in Saskatchewan.

She had given the children’s moccasins to the Pope when an Indigenous delegation visited Rome earlier this year. They were meant to represent children who never came home from residential schools and she had told the pontiff she expected him to return them when he came to apologize on Canadian soil.

Following the Pope’s long-awaited apology, Chief Wilton Littlechild — a former commissioner of the TRC — gave the pontiff a traditional Indigenous headdress. A smile beamed across the pontiff’s face as it was placed on his head.

‘A house for all’

The Pope’s second public event on Monday was a visit to Sacred Heart Church of the First Peoples in downtown Edmonton.

Then the Pope spoke at length to the invitation-only congregation of several hundred Indigenous leaders, parish members and others.

Francis said he was delighted to see a church community made up of both Indigenous and non-Indigenous people.

“It is a house for all. It is open and inclusive,” he said.

“Just as the church should be.”

The meaning of reconciliation

He also spoke of his apology earlier and says it pains him to think that Catholics contributed to policies of assimilation that robbed people of their culture and identity.

“In the name of Jesus, may this never happen again in the church,” he said.

“May we see not a problem to be solved, but a brother or sister to be loved. May the church be a living body of reconciliation.” 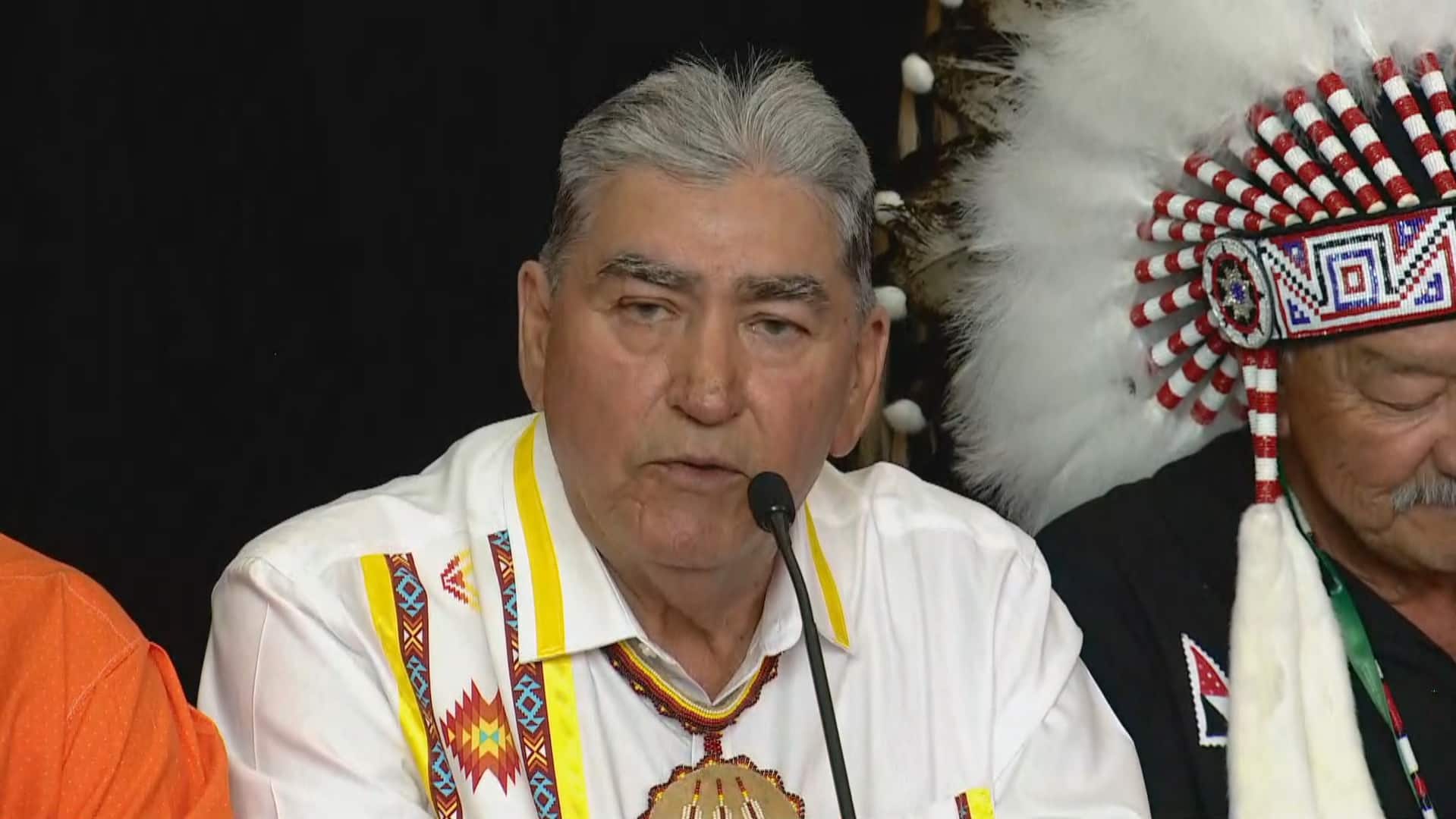 Pope’s apology an opportunity for rest of Canada to start ‘doing their work,’ survivor says

Samson Cree Nation Elder John Crier, a residential school survivor, said that while Indigenous Peoples are working to heal, he expects people and governments across Canada to act on this opportunity for reconciliation. ‘After all, we’re in this together,’ Crier said.

At the conclusion of the service, the Pope was wheeled slowly past the front pew, taking a few seconds to touch hands and offer a gift and blessing to the guests seated there.

‘You are not alone’

At a morning news conference, Indigenous chiefs from the four nations that make up Maskwacis and other First Nations in Alberta spoke about what the apology means to their people and their gratefulness to the world for bearing witness to the historic moment.

“Pope Francis has shown grace,” said Grand Chief George Arcand Jr. from the Alexander First Nation. “I thank him for honouring our request to deliver this apology in person. It is a gift for many.”

Chief Vernon Saddleback from Samson Cree Nation noted that he was grateful that the many dignitaries attending the event — from Treaty 6 leaders to Prime Minister Justin Trudeau to Gov. Gen. Mary Simon — were not invited to speak.

All of the chiefs spoke about the “survivors and thrivers” who live in their communities, as well as about the pain that the papal apology will evoke within many.

“I anticipate this apology will weigh heavily and open old wounds for survivors,” said Chief Desmond Bull of the Louis Bull Tribe.

“We are here with you. And you are not alone.”

The Pope committed to the Canadian tour on April 1, after meetings over several days with First Nations, Inuit and Métis groups at the Vatican. At the time, Francis apologized for the deplorable conduct of some church members involved in residential schools and promised to visit Canada.

An estimated 150,000 Indigenous children were forced to attend residential schools in Canada, where neglect and physical and sexual abuse were rampant. More than 60 per cent of the schools were run by the Roman Catholic Church.

On Tuesday, the Pope will celebrate a large outdoor mass at Commonwealth Stadium in Edmonton and take part in a pilgrimage at nearby Lac Ste. Anne, before travelling to Quebec City and Iqaluit.